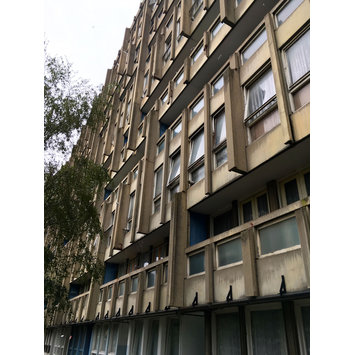 This object consists of a three-storey section of Robin Hood Gardens - a residential council estate of two slab blocks, located in Poplar, Tower Hamlets, London - removed in its parts during demolition of the west block in 2017-18. Robin Hood Gardens was designed by the architects Alison and Peter Smithson between 1969 and 1974 and was considered one of Britain’s most important Brutalist works of architecture, and one of the few built works by an architectural partnership that were luminaries in twentieth-century world architecture.

Alison + Peter Smithson
Wife and husband Alison (1928 –1993) and Peter Smithson (1923 – 3 March 2003) formed an architectural partnership that led British New Brutalism (often simply called Brutalism) through the latter half of the twentieth century. The Smithsons were great design rebels, writing and lecturing worldwide. Their views often divided opinion and thus resulted in few commissions for architects of their stature, but did include the highly praised Economist Building in St James’s, London (1959-65). The Robin Hood Estate is their ultimate and only built statement on social housing.

Robin Hood Gardens
Robin Hood Gardens was located in the southeast quarter of Poplar, on a difficult site sided on the east with the northern Blackwall Tunnel approach, and on the west with the busy trunk road bordering the north-eastern corner of Canary Wharf. Commissioned by the Greater County Council (GCC), Alison and Peter Smithson instituted their ideas on social housing which they had been widely known for since the early 1950s, particularly ‘the building as street’: flats accessed by wide access decks where residents could meet, enhanced by the entry doors to flats facing one another in pairs.

The estate consisted of two long curved buildings facing each other over a green space. The exterior finish was rough shuttered concrete precast in pieces on the Swedish Sundh system. All the flats, except at ground level, were maisonettes on two levels. The inward-looking facades of both blocks were similar, as were the outward facades. Although facades were characterised by the repeating grid of windows and doors, and by the horizontal setbacks of the walkways on the outward sides and the continuous balcony/escape corridors on the inward sides. A major visual element were the vertical concrete ribs that acted as noise deflectors, of varying lengths and placement, breaking up the symmetry and giving the facades a strong visual effect.

The Object
The removed fragment comprises the elements of the interior and exterior of two integrated maisonette flats over three-stories except floors and internal walls. The flats were located on the upper floors near the south end of the building. The object is thus a constituent of disassembled parts. The pre-fabricated concrete exterior elements consist of slabs of external wall panels, parapet railings and acoustic fins. The internal elements include the two concrete stairs, all joinery (i.e. kitchen units, cupboards, skirtings, panelling), doors, windows and sanitary units.

3-storey section of a council block, minus floors and walls 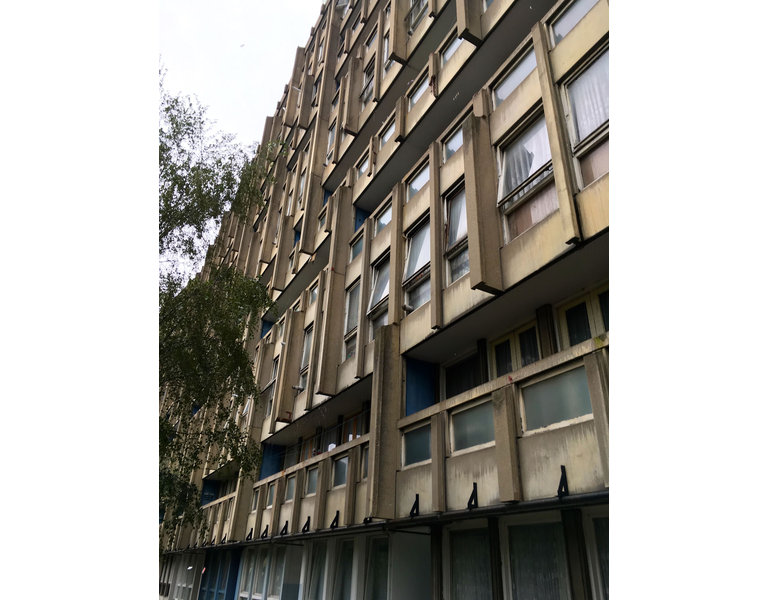