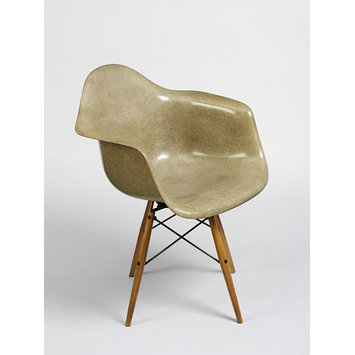 This armchair was designed in 1950 and was a development of both the organic forms of the Eameses' plywood furniture from the 1940s and their designs for the Low Cost Furniture competition staged at the Museum of Modern Art (MoMA), New York, in 1948. This particular example dates from the first period of the model's manufacture in the 1950s, and was made by Zenith Plastics in Los Angeles for the Herman Miller company. We know this because it has a single label for Zenith Plastics together with Herman Miller and the Eames studio. The Eameses were not alone in designing chairs made of new plastics, but they were the first to use the marble effect of the fibreglass strands strengthening the polyester as a decorative effect, unashamedly celebrating the modernity of the design. The first chairs to be produced were in more muted shades than later production. Zenith Plastics made fibreglass casings for radar machines during the Second World War, so the chair represents how wartime military technology and industry found peacetime civilian applications.

Grey armchair of moulded fibreglass reinforced polyester on metal swivel base supported on four wooden legs. The shell is moulded in a single piece to form armrests and back as well as seat. The back is raised higher in a gentle curve. For strength all edges curve generously outwards (tulip shape) ending in a tied curl which aesthetically provides the chair with an open and welcoming form, the edges finished by rolling under. The fibreglass reinforcement of the shell is clearly visible in the form of thin fibres.
The four dowel legs of birch are tapered inwards towards the seat. In the middle of each is a recessed screw with a cross-cut head which connects a metal rod with the top of the adjacent leg forming a saltire cross between all four legs to prevent splaying of the legs. The legs are attached to a metal bar which is set into a slit in the top of each leg and is fastened by a screw with a cross-cut head. The metal bar connects the legs in pairs, diagonally and is fixed to the swivel mechanism at the bottom of the chair. The swivel mechanism operates as two round black metal plates with ball-bearings and a ring in between. The upper plate is fixed by metal bars to four round black metal plates under the centre of the chair.
Glued to the underside of the curved edge at the front of the seat is a square label. The label is divided in four equal squares with back and red print (text as in Marks & Inscriptions)

The DAW (Dining Armchair Wood) armchair was designed in 1950. It progressed from the organic forms of Eames's plywood furniture of the 1940s. This example dates from the first period of manufacture in the 1950s. We know this because the chair has a label for Zenith Plastics together with Herman Miller and the Eames studio. Zenith Plastics made the first DAW chairs for the Herman Miller Company.

Historical significance: Zenith Plastics made fibreglass casings for radar machines during the Second World War. So the chair is an example of wartime military technology and industry finding a peacetime civilian application. This is why the chair was acquired for the Cold War Modern exhibition. Though it is not very rare, it is uncommon to find such an early labelled example in good condition.

Charles and Ray Eames designed this chair in response to the Museum of Modern Art's 1948 International Competition for Low-Cost Furniture Design. They initially presented a prototype of a single-shell armchair made of metal and coated with plastic. By 1950, however, the design had evolved into a shell made from glass-reinforced plastic (fibreglass), a material used in the manufacture of radar domes and aircraft.

The designers of this chair were inspired by the wartime use of artificial resins reinforced with glass fibre. This material offered a solution to their desire to produce a chair ‘shell’ as a single piece.

The shell was first moulded out of strands of fibreglass and adhesive. It was then impregnated with molten resin within the same mould. [01/12/2012] 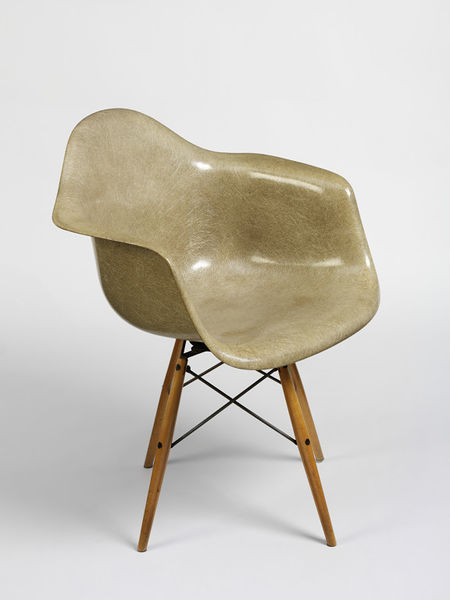