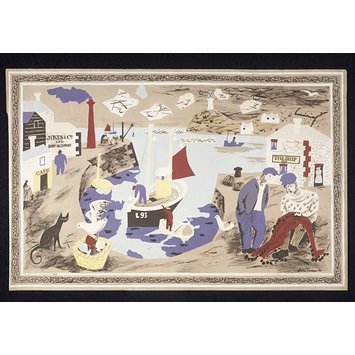 This print was the first lithograph by painter and printmaker Julian Trevelyan. Trevelyan first studied printmaking at Stanley William Hayter's 'Atelier 17' in Paris from 1931. He joined the Mass Observation Group, begun in 1937, where volunteers recorded observations of the everyday lives of people around them, and this influenced some of his subject matter.

Set up in 1945 by Brenda Rawnsley, the School Prints scheme commissioned well-known artists to create lithographs, which would then be printed in large numbers and sold cheaply to schools for display in classrooms; the aim was to give 'school children an understanding of contemporary art'. Each lithograph had a drawn frame so that the print could be pinned to the wall. In the spirit of post-war optimism, artists responded enthusiastically. The scheme was a unique attempt at giving children access to original works of art in a period of austerity but ended in 1949 because of financial problems. Many of the prints depict a familiar world of everyday rural or urban life, some presenting a version of the pastoral idyll and others scenes of entertainment or leisure.

Colour lithograph depicting a harbour in predominantly browns and blues, with some red, pale pink and yellow. The image shows a small curved harbour with, to the left, a small cluster of buildings and a red chimney to the left giving off blue smoke and a wynch at the end of the harbour path. A man is moving barrels at this end. The buildings include a cafe and Jones & Co Boat Builders, a black timber building and another building. The Ship Inn is the only building on the right of the harbour. A two masted boat with man on board lies in the water and with a tender, in which a man is approaching the larger boat. In the foreground a seagull plays with some fish in a basket whilst a black cat watches it and near to them two cats are playing on a barrel next to the cafe. Towards the right one man, in white jumper and striped trousers, sits mending a red fishing net and with him stands another man wearing blue and yellow. In the water can also be seen two more boats. In the background is a lighthouse on a premontary, on which stand two further houses, white with blue roofs. The border is beige with a random crisis-cross pattern in black.

School Prints series was published in the 1940s. The idea behind the series was to commission established artists to create lithographs which could be editioned in very large numbers and sold cheaply to schools, for display in corridors, classrooms and assembly halls. The pupils would enjoy direct contact with new works of art. The entrepreneur, Mrs Brenda Rawnsley, wrote: 'We are producing a series of auto-lithographs, four for each term, for use in schools, as a means of giving school children an understanding of contemporary art.'

In the spirit of post-war optimism, the artists responded enthusiastically, and submitted sketches to the selection committee, chaired by Herbert Read, which included influential R.R. Tomlinson, London County Council Senior Inspector of Art. Many of the prints depict a familiar world of everyday rural or urban life, some presenting a version of the pastoral idyll (John Nash 'Harvesting') and others scenes of festivity (Barbara Jones 'Fairground'), entertainment (L.S. Lowry 'Punch and Judy') or leisure (John Tunnard's surrealist 'Holiday'). Each lithograph had a drawn frame around the image so that the print could be pinned to the wall.

Victoria & Albert Museum Department of Engraving Illustration and Design & Department of Paintings, Accessions 1946. London: Published under the Authority of the Ministry of Education, 1949. 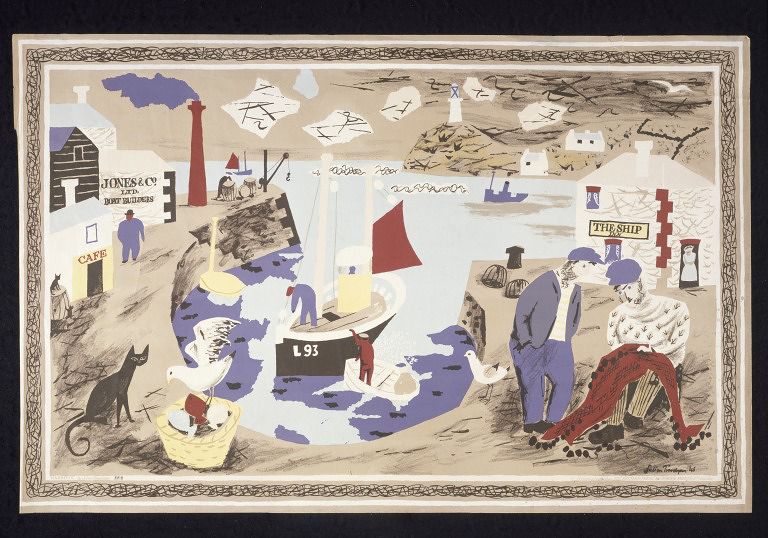