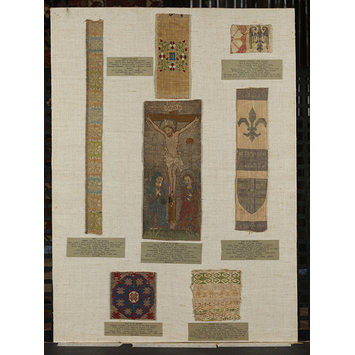 From the Forrer Collection. According to notes made in accession register, this is one of 203 early textiles acquired for £700 in 1899.

Dr. Robert Forrer of Strasburg corresponded frequently with the V&A between 1893 and 1920, offering for sale a wide variety of medieval and Renaissance artefacts, mostly European, including textiles, jewellery, medallions, books, tiles, clocks, furniture, ironwork and miscellaneous items. Many of these items, although not all, were subsequently purchased by the Museum.

This textile is believed to have been part of an orphrey band. These were decorative bands, either embroidered or woven, that were applied to decorate vestments, sometimes concealing seams (Johnstone, p. 13). They often include gold thread and are thought to thake their name from auriphrygia or Phrygian gold (Mayo, p. 161).Wider bands (which would have gone down the centre back and front) often included religious scenes, (i.e., T.31-1936), while narrower ones, such as the ones from which this object came, tended to feature smaller decorative motifs, including, as here, heraldic shields. The motif on the object would have alternated with another device on the rest of the band, possibly a shield or a different design, as illustrated by two other fragments from a German band in the Study Galleries. 7021-1860 has alternating shields, while 8281-1863 has fleur-de-lis alternating with shields. 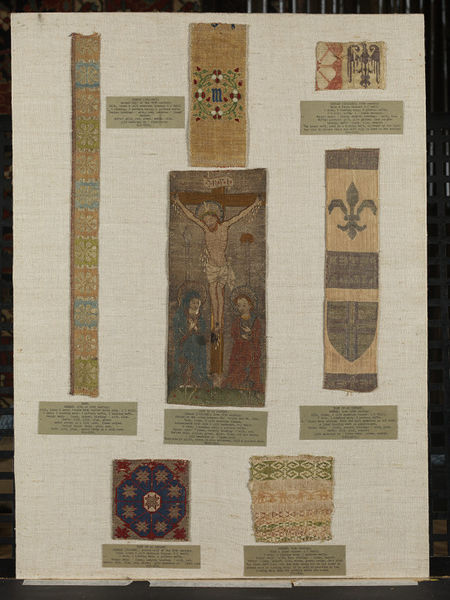