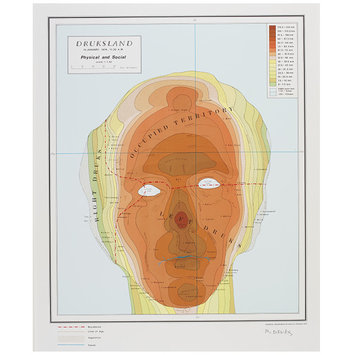 Israeli-born conceptual artist Michael Druks has lived and worked in Britain since the 1970s. His self-portrait/map is part of a body of work in which he explored personal and political identity using the idiom of mapping as a universal vocabulary understood all over the world - 'an experiment to use international and visual language for individual purposes.' In 1974 Druks had been approached by Steendrukkerij de Jong & Co. - one of the largest printing houses in Europe which was leading progress from photo-mechanical to digital technologies in the printing industry. The company annually invited an artist to create a print to be given to clients as a promotional gift and this image was the result.

Image in oranges and greens, representing the portrait of the artist as a map with 'contour' lines and colour zones.

OCCUPIED TERRITORY
within face around forehead

LEFT DRUKS
within face running diagonally down from nose area

'Druksland already in its title ... (which brings to mind ... the collocation "Holyland") interweaves the personal with the political and incorporates the biographical, the social and the historical. Indeed, the work's power is in its integration of these dimensions - the bodily, the spatial and the cartographic - where the bodily dimension is personal (a self-portrait) and not general (an idea pattern). In this work Druks's head turns into a topographic expanse made up of spaces that contain the landscapes of his life with the inner (psychological) and the outer (social) dynamic that shapes them on various levels of consciousness. The technique of topographic mapping makes Druks's face appear three-dimensional, like the surface of the earth with all its hills and valleys. This is not a flat plane: the egg-shaped form of the head is perceived as a spherical world that is anchored at the neck, perhaps a globe leaning on its axis ...'

'This is not a political map that displays borders; that is, as declared in the title, a "Physical and Social" map. It marks details such as mountains, vegetation and types of soil, but the political context is insinuated here because this kind of topographical map in particular is used to plan military campaigns and also as teaching material in youth movements and "knowledge of the land" expedition circles. As in any topographical map, the surface of Druksland is represented by contour lines indicating height that are graduated in different hues, while lakes are marked in blue, plains in green and mountains in brown. Translation of three-dimensional terrain into the two-dimensionality of the map is no simple task, and this difficulty is intrinsic to cartography. The solution that Druks found for this and the production technique that he chose are closely connected to cartography's technological and historical contexts, and these are therefore important for an understanding of the work.'

'In Druksland, as in pre-modern maps, or maps made in non-Western cultures, man himself becomes a significance-bearing expanse networked by means of cartography. The inner space (body or face), the microcosm, at once becomes a large-scale space (a landscape, a universe), a macrocosm. This fascinating and troubling combination, which transforms the magnitudes of body and space, was prevalent in ancient cosmographic maps, which sought to interpret the relations between man and the universe in magical and alchemical terms ... [T]he Surrealists, inspired by them, developed psychological maps of the subconscious. But the way in which Druks organizes chapters in his life story, gives them names and charts then in the spaces of Druksland, brings to mind another forgotten discipline, Mnemonics ... This technique heightens cognitive control by means of visual "maps" of image and text that assist one to keep in the memory intricate systems of reciprocal connections. Images and concepts are placed in spaces of an imagined but familiar expanse ... This visual-conceptual progress, using the method of imagined movement from one space to another, thus preserves a bodily sensation in the context of a conceptual order.
During the Renaissance, mnemonic mapping developed into a comprehensive world picture that sought to establish a correspondence between microcosm and macrocosm. The represented world was perceived as given to the gaze and hence also as given to control. This political/psychological level charges the "art of memory" with a special relevance for Druks's work.'

'... In the natural course of things, experiences a person has during his life become blurred with time; sediments remain, which act in the depth of the subconscious and have an influence on the personal and the collective planes. Druks situates these sediments in a synamic memory map: two pools of water function as a two-directional flow of absorption and emission, of sucking in and scattering out, as appears from the[ir] titles'

[Paraphrased from this point] Druksland contains designations of identity characteristics, eg Judaism, or forces or drives, such as status and money (Kessef in Hebrew).
'Occupied Territory' (occupied means conquered, taken, not-vacant, busy) Druks claims is the central place of his mother and father in the map of his personality. It may also have a distinctive political meaning.
Hanoch (Levine) line bisects the map vertically and horizontally creating some of its boudnaries.
Other references on the map are influential teachers, addresses of apartments, cities, names of members of his family, close friends, fellow artists (one as an observation point on a ridge- (Joshua) Neustein point), schools galleries and owners.
(Adam) Baruch point on the summit of the nose ridge has a double meaning: the private person (adam in Hebrew also means person) and the blessing (baruch means blessed, and is the opening word of all Hebrew benedictions implicit in his name).
Time, 'Lines of Age', may be understood as age in years and as an era.
'Right Druks' and 'Left Druks' may be understood as expressions of a social world view.
'Empty Plateau' above 'occupied Territory' is ambiguous: plateau is a high plain but is also stagnations and lack of progress.

[Paraphrase] Druks began planning in Israel in 1970 with the support of a gallery owner, but the project was not carried out. In 1974, now in London, he was approached by one of Europe's largest printing houses, which employed the most advanced technology in the field. The printing house used to annually print a work by an invited artist, to be given as gifts to clients.

'In the 1970s, when Druks was invited to work with this printing house, computerized pre-press methods had begun gradually replacing the photo-mechanical methods ... Druks chose to focus on the structural changes that took place in cartographic procedures behind the scenes of the transition from photo-mechanical to electronic technology ... To render his face in two dimensional form, Druks created his own projection: using a slide he projected a grid of stripes onto his face, and then photographed his profile from both sides. The combination ... created a frontal portrait marked by contour lines. The entire process - the photographing, and after that the copying of the image of the face onto transparent paper and the marking of the various areas in color - was done at St Martin's School in London.'

'With the material ready for production, Druks set off for Hilversum in Holland, where he worked for several days beside the printing workers. As he recounts, "Although the color separation was electronic and the techniques super-modern, what fascinated them was using the new techniques to produce a product constructed on the logic of the old techniques" - which included producing a plate webbed with dots as in the old offset process.'

This self-portrait in the form of a contour map by the Israeli-born artist Michael Druks explores issues of personal and political identity. In naming his facial features, he alludes to the politics of Israel and the contested ownership of land in the region, using terms such as ‘Occupied Territory’ and ‘Right and Left Druks’. [11/09/2017]
Israeli-born conceptual artist Michael Druks has lived and worked in Britain since the 1970s. His self-portrait/map is part of a body of work in which he explored personal and political identity using the idiom of mapping as a universal vocabulary understood all over the world - 'an experiment to use international and visual language for individual purposes. [2007] 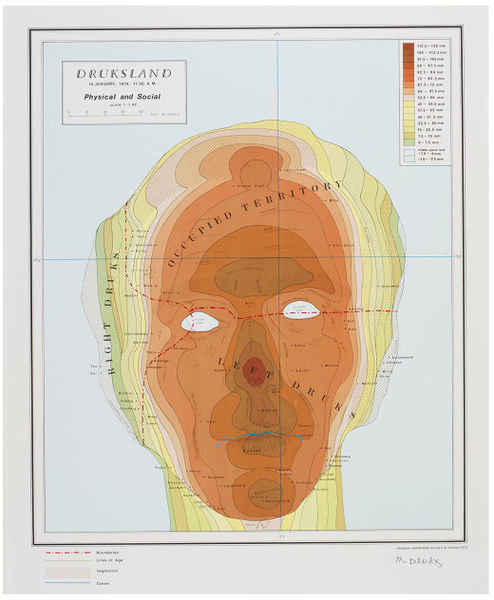