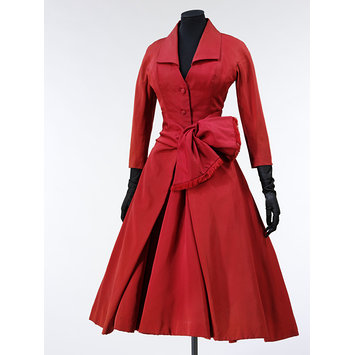 Christian Dior (1905-57) launched his couture house in 1947, and soon became one of the most sucessful fashion designers of the 20th century. The smooth silhouette of this dress is formed by underpinnings and petticoats. the draped fabric knot is inspired by 19th-century dress, and is typical of Dior's historicism.

Dior often named his collections after letters of the alphabet, and this particular dress comes from the 'Y line'. The deep v-neck of this dress typifies Dior's 'Y' motif, as does the inverted Y shape of the pleats of the skirt.

The dress is made from a fine grosgrain crimson silk. It has a very full skirt, made fuller by two wrap-around panels at each hip with fringed ties that twist at the hip to create a bow. It has a tailored shirt-like top, comprising full-length sleeves, collar, and a deep V-neck front which fastens with 2 self-covered buttons. The top is partly lined with red silk at the front. There is an underdress which attaches to the main inside of the dress at the waist. The bodice of the underdresss is made of red silk organza and fastens with metal hooks and eyes at the front. The bodice has metal coil 'boning' and should also have thin shoulder straps, only one of which is still evident though loose from one side. The all-red skirt of the underdress is made up of a layer of organza and nylon net, 5 layers of gathered tulle with additional gathered tulle panels at each hip, and another underskirt of organza and nylon net.

Silk grosgrain, lined with silk, nylon and organza net, and tulle; with metal coil 'boning' in the bodice

This piece was designed by Christian Dior for his Autumn/winter 1955 Y-line collection, and is called 'Ecarlate' (Scarlet). It is a red silk cocktail dress, and is very typical of Dior at this time as it features and exceptionally full skirt and a bow effect for which Dior is noted. It is also of a deep 'Dior' red, which he often used. It is an excellent example f couture construction and pattern cutting.
The deep V-neck typifies Dior's Y-line motif, as does the inverted Y shape of the pleats of the skirt.
It was purchased at auction in Paris specifically for The Golden Age of Couture exhibition, and its publication

The Y-line directly followed the A-line collection of the Spring/Summer season. The Y line was less easy to pinpoint than the A, but basically it was defined as a slender body with a top-heavy look. This Dior achieved by adding big collars that opened up in a V shape, like the arms of the Y. (Brigid Keenan, Dior in Vogue, p.132)

Although Dior created a couture house that defined a new era of commercial success for French couture, his designs evoked an older, more formal, more romantic era. The smooth silhouette of this dress is formed by underpinnings and petticoatsthe fringed bows and fabric knots, inspired by 19th-century dress. Cecil Beaton described him as 'the Watteau of fashion'. 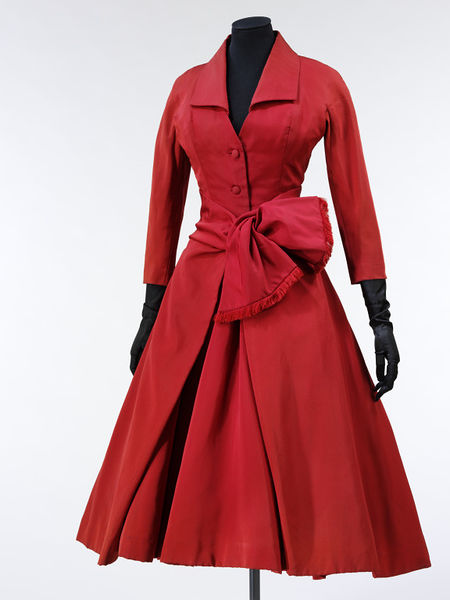