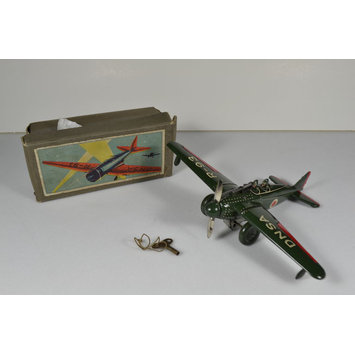 Toy aeroplane, made from lithographed tinplate. It is a two-seat monoplane, with a two-blade propellor, its fuselage and wings can be separated. The whole is generally coloured khaki, with the 'control surfaces' highlighted in red. It is decorated in a regular pattern along its fuselage with white spots, representing rivets. There is a Japanese air force roundel on either side of the fuselage. Integrated into the fuselage, seated in a slightly-depressed 'cockpit', are the two crew: small figures, khaki with pink faces, wearing white goggles. In front of the pilots, mounted on a hinge, is a representation of a machine gun. Projecting from the bottom is part of the toy's mechanism, and two green wheels mounted on a steel axle. The toy can be wound by a separate key using a spigot projecting from its proper left side. When the toy is activated, it moves forwards whilst performing a banking motion, tipping from side-to-side, as the propellor turns. The machine gun is struck on its underside by a rotating toothed wheel, which causes the gun to jump, emulating recoil, and to issue sparks.

With the toy is its original, made from grey card, stapled to form the box. Adhered to the lid is a colour-printed label with an illustration of the toy inside, flying through the air, followed by another aircraft (shown in silhouette), with the yellow beams of two searchlights in the background.

'T.N'
Printed inside a black diamond on the proper left side of the tailfin.

'SHOWA'
Printed inside a black logo on the proper right side of the tailfin.

Bequeathed by Lois Anne Clater. 'Peerless Trading' was a fancy goods shop and toy importer located in Harrogate, Yorkshire, the business was owned by Albert Edward Conway. Lois Anne Clater was the daughter of Albert Edward Conway, and it was from her the Museum received four objects (see B.48 to 51-2017). The family believe these toys were originally acquired as trade samples for Peerless Trading, and that they were not played with. 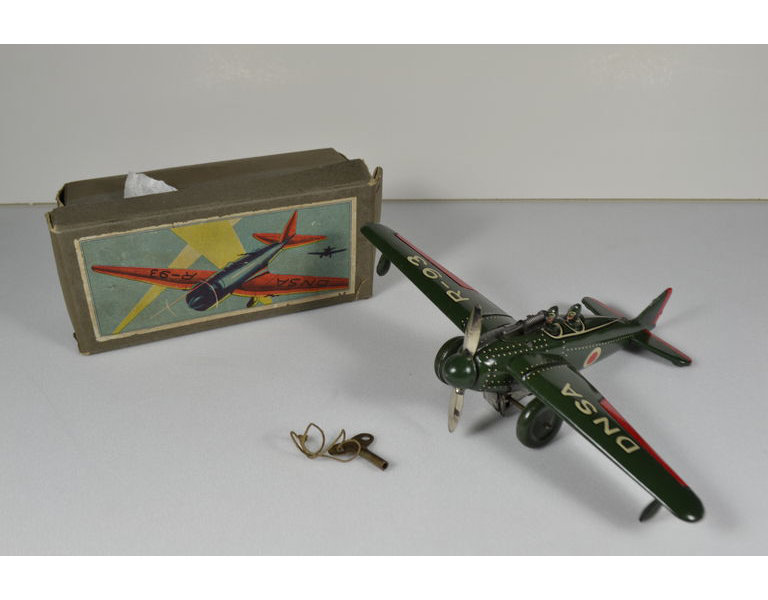