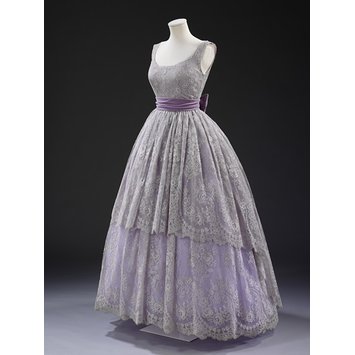 Jacques Fath opened his Parisian couture house in 1937. He quickly became known both for his softly sculpted garments and a talent for self promotion. This dress is likely to have been designed by Fath’s wife and muse Geneviève, who upon Fath’s death in 1954, oversaw the house until it closed in 1957.

While the dress’s surface is a soft, delicate lace, in contrast the underpinnings are highly structured: its petticoat features a boned bodice and a crinoline skirt. The pale violet colour and two-tiered skirt suggest a romantic view of women’s fashion.

Cynthia Jebb (Lady Gladwyn) was the wife of the British Ambassador to Paris, Sir Gladwyn Jebb, 1954-60. She hosted the state visit of Queen Elizabeth and Prince Philip, April 8-11th 1957.

This dress was worn on the last evening of the state visit, Wednesday 10 April, to dinner in the Salle des Caryatides of the Louvre palace. “Tremendous trouble had been taken; statues moved, velvet curtains hung over the windows, small orchestra in the gallery” - The Diaries of Cynthia Gladwyn, p.211. She wore it with her 'Aunt Amie's wreath' - a wreath-like tiara worn forwards.

During the state visit, Mme. Dufy - Lady Gladwyn's vendeuse at Fath - attended her at the Embassy to dress her. On the first evening she wore a lime coloured satin gown, and on the second she wore a white tulle gown with red velvet bows on the back. The latter dress was sketched by Cecil Beaton who was also attending: "...at half past one Cecil Beaton was stilll sketching Diana Copper and Anne Nrowich in the Ionian Room. He then wanted to do me, but I aws too sleepy, and after a few minutes posing, went to bed" -The Diaries of Cynthia Gladwyn, p.210. 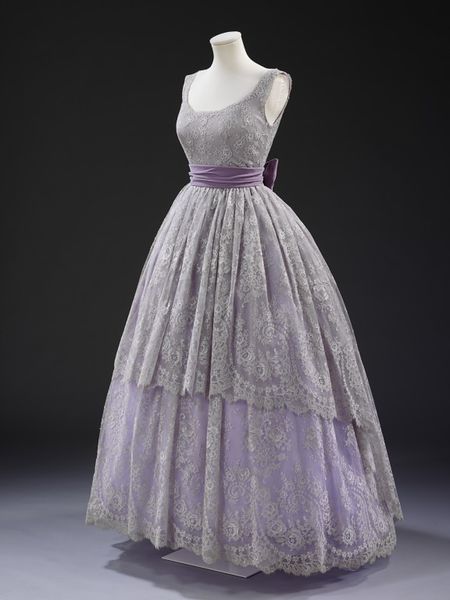