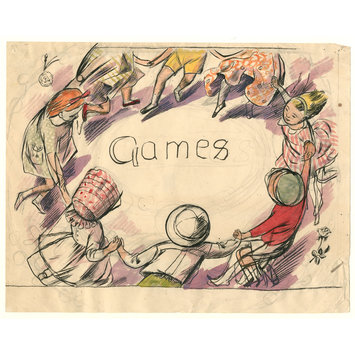 Design drawing, pencil, ink and watercolour on paper. The design shows a group of eight children with hands linked, dancing at speed in a ring. In their midst is written the word 'Games' in ink.

Graphite, ink and watercolour on paper

Purchased by the Museum in 2016 along with B.22-2016. The provenance was given as 'Roger Folley (Dunbar's husband); Alasdair Dunbar; Hammer Mill Oast Collection'. The works bear the Hammer Mill Oast (HMO) inventory numbers 113 and 374 respectively. Hammer Mill Oast is a converted hop chimney in Biddenden, near Ashford, Kent, which was owned by Evelyn Dunbar's brother, Alec (Alasdair), who recieved the contents of her studio when she died suddenly in 1960.

Both works were displayed in the exhibition Evelyn Dunbar - The Lost Works at the Pallant House Gallery, Chichester, from 03/10/2015 - 14/02/2016. The exhibition catalogue gives the following provenance information: 'This exhibition is the result of a happy convergence of three serendipitous events: the discovery by Ro Dunbar of over 500 previously unrecorded works by Evelyn Dunbar and the subsequent meeting of Ro and Christopher Campbell-Howes after his twenty year quest for the lost works; along with the vision of Simon Martin in bringing the exhibition to Pallant House Gallery'.

Evelyn Dunbar (1906-1960) is best-known for her work as an Official War Artist during the Second World War, especially for her portrayals of the Women’s Land Army. Her father, William, moved south from Scotland in the late-19th century, finally settling in Rochester in 1908. In the early 1920s, two of Evelyn’s sisters, Jessie and Marjorie, opened The Children’s Shop on Rochester High Street, from which they sold children’s clothing and toys. Evelyn was engaged by her sisters to design various products, shop stationery, and even the shop’s signboard. The business expanded to a larger premises on the High Street in 1938 and was renamed The Fancy Shop. Initially, Evelyn ran her own gallery space, The Blue Gallery, at this new premises, but her straitened finances meant she was forced to close the gallery at the start of the Second World War and took a commission as an Official War Artist.

After the War, Dunbar and her husband moved several times, eventually to a house on the outskirts of Wye, Kent. 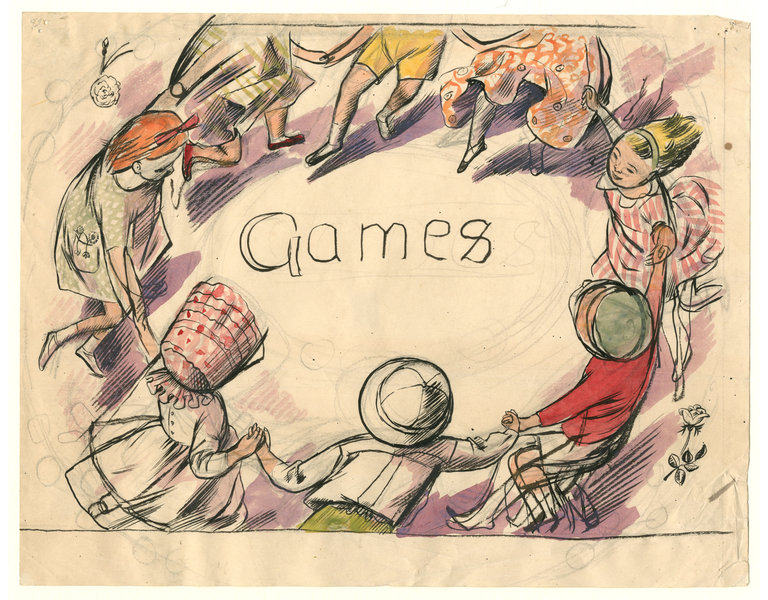