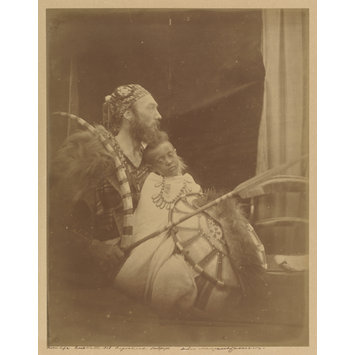 Prince Dèjatch Alamayou was the son of an Ethiopian emperor who committed suicide rather than surrender to the British in 1868. Captain Speedy brought the Prince to England and the orphan prince came to live on the Isle of Wight, where Queen Victoria took a particular interest in him, paying for his education and allowing him to be buried at Windsor Castle when he died of pleurisy aged eighteen.

Photograph of a seven-year-old boy (Prince Alámayou), seated, wearing a white shirt and necklace with large pear-shaped pendants. A shield has been positioned in front of him and held by a dark-skinned seated man. He sits on the lap of a bearded man shown in profile.

Tewodros’s son, Prince Alemayehu, was just seven years old when the British army took him from Maqdala and brought him to England. In this photograph, he has been dressed in Ethiopian clothes to pose with Captain Tristram Speedy, who assumed the role of his guardian. This image commemorates a visit to Osborne House on the Isle of Wight, where Alemayehu met Queen Victoria. She took a personal interest in his upbringing and was deeply saddened to hear of his death in 1879.

This atmospheric print shows Prince Alemayehu, represented as a babe in arms silently screaming his angst. It shows the face of someone who belongs to no one, but is longing for everyone. Torn from the familiar and accepting his fate as a favoured royal plaything, Alemayehu is submission personified. 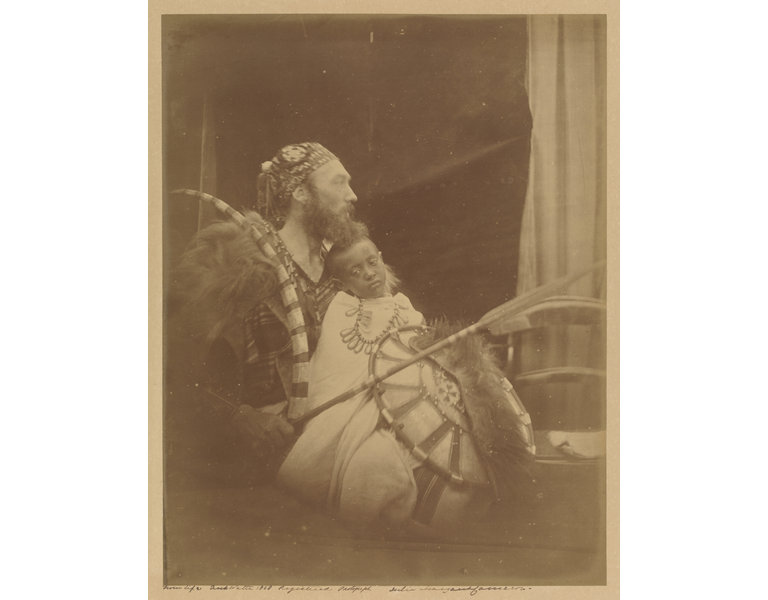