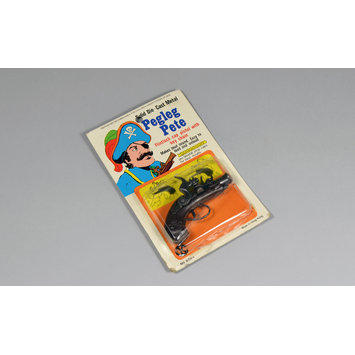 Cap pistol with original packaging. The toy is designed to resemble a flintlock pistol, it has a die-cast metal barrel, pan, frizzen and trigger guard, and a brown plastic stock. The proper right side of the grip has a moulded skull and crossbones, the proper left has a three-quarter profile of a pirate's head, wearing an eyepatch, cocked hat and a full beard. Cast into the proper left side of the barrel is the word 'PIRATA'.

With the pistol is its original packaging, consisting of a transparent plastic blister partially adhered to a printed card back. Above the blister is a large colour printed illustration of a pirate with a full moustache and eyepatch, wearing a blue coat and cocked hat. The pirate holds a small flintlock.

'PIRATA'
Cast into PL side of barrel.

Cap guns simulate real firearms by exploding a percussion cap, producing a loud crack and a puff of smoke. They were first developed in the mid-19th century when percussion cap technology used in real-life firearms was miniaturised. Caps typically are produced in long strips, or as rings for revolver-style toy weapons. The heyday of cap guns came in the two decades following the Second World War. Increased television ownership exposed more and more children to the Wild West genre of films and television, which meant manufacturers often dubbed their products with Western-sounding names. Cap guns have been manufactured in a great many sizes and styles, from small keyring ‘derringers’ to rifles and submachineguns. Other themes aside from cowboys, usually military, spy, or space, were also produced, increasingly so after Westerns began to lose their popularity in the 1970s.

Pirates and pirate stories have been popular with children for more than two hundred years. They offer the appeal of romantic and exciting adventures across the seas to mysterious lands, fighting dreaded rivals and obtaining rich treasures, with pirates playing the roles of heroes, anti-heroes, or outright villains. Over time, the content of children’s pirate stories became increasingly sanitised and stereotyped, removing fictional pirates from their unsavoury historic origins.

One of a series of cap guns produced by this manufacturer. The others were Cowboy Gun, Gambler Pegleg Pete, Gambler Mini Derringer, Army Special and George Washington. 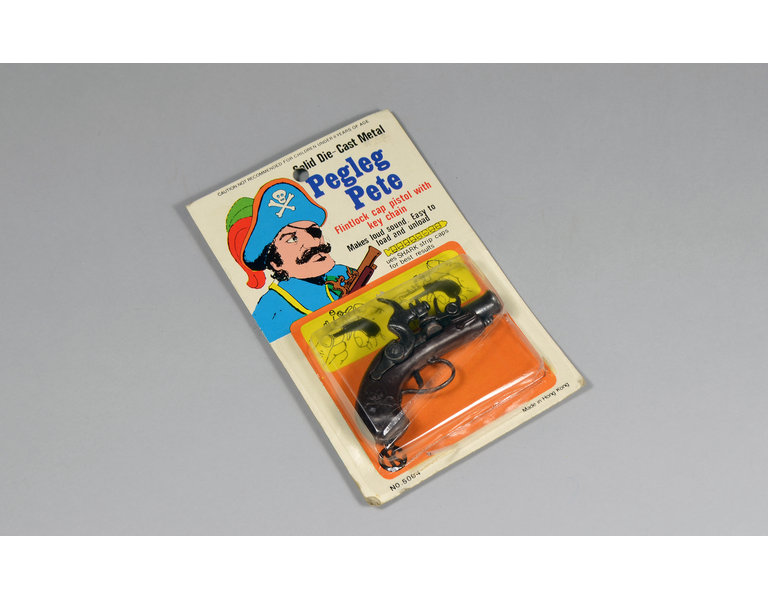