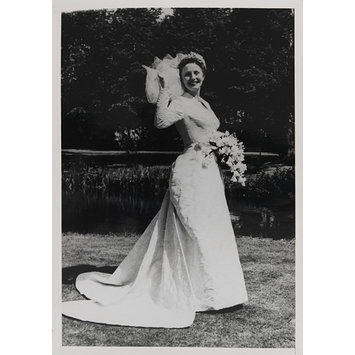 This elegant gown was commissioned by Vivian Williams for her marriage to Mr. Albany Ward on 3 August 1957. It was designed by the Paris couture house of Jacques Fath and licensed to Vogue Patterns to produce as a sewing-pattern. Vivian had originally planned to have a gown custom-made by the Harrods Bridal Room, but when she saw the Fath design while looking through a Vogue Pattern Book, she noticed how closely it resembled her original choice. She subsequently purchased the pattern and fabrics from the Dickins & Jones department store in London, and took them to a professional local dressmaker to be made up. This enabled her to marry in a gown designed by a famous couture house at a fraction of the cost of purchasing a original Paris couture model, or having a dress custom-made by Harrods.

Vogue sewing patterns began in America in 1899 as a weekly feature of Vogue magazine and could be purchased by mail order. When Condé Nast bought Vogue in 1909 they began to offer a wider range of pattern styles and sizes. The Vogue Pattern Company was formed in 1914, and by 1916, its patterns could be bought in department stores. In 1933 the company opened its first London branch. Vogue became the first pattern company authorised to duplicate French couture designs, with their 'Vogue Paris Original' pattern line in 1949. Licensing designs to large-scale pattern companies provided couturiers with a way to regain control and retain income from their work that would otherwise be lost to illegal copyists. It also helped make Paris couture more accessible to a wider audience.

Wedding dress of cream damask and veil. The dress is full length, with buttons down the front creating a coat-dress effect, with a fitted bodice, flared skirt and long tight sleeves. The back of the dress is elaborately cut with intricate cross-over draping falling into a train.

This wedding dress was made from a Vogue pattern. It was designed by the house of Jacques Fath (the designer himself died in 1954). It was made for Vivian Williams by a professional local dressmaker, and worn by her for her wedding to Mr Albany Ward on 3 August 1957. The corset was bought at Dickins and Jones on Regent Street, London. and taken in slightly at the waist by the donor, as it was too big.

The fabric for the dress was also purchased at Dickins and Jones. Vivian had intended to have her dress custom-made by the Harrods Bridal Room, but then discovered the dress pattern in the Vogue Patterns book, and noted how similar it was to her original choice. She decided to have her dress made by a private dressmaker, realising this would cost a lot less than going to Harrods.

Wedding dress of cream damask and veil, made from a pattern by Jacques Fath, Paris, and fabric retailed by Dickins & Jones, London, 1957

These three recent additions to the collection of 20th century fashionable dress celebrate weddings of 1957, 1968 and 1987. From time to time the Museum acquires wedding dresses by leading fashion designers. Display space in this gallery is limited and unfortunately there is not sufficient room for these special occasion gowns which are usually so lavish with spreading skirts, long trains and floating veils. A selection of the V&A's wedding dress collection can be seen at the Museum of Childhood, Bethnal Green. Wedding fashions change yet, as these garments reveal, the wearing of white or off white is a tradition most brides continue.

Jacques Fath (born 1912) was a talented Paris couturier whose premature death at the age of 42 in 1954 tragically cut short his creative output. His widow Genevieve kept the house running until 1957. This gown numbers among the last and now rare designs issued under his name. With its nipped in waist, fitted bodice and full skirt it epitomises the fashionable look for a bride in the later 1950s. The pleated cross-over, double train and rows of minute buttons along centre front and pointed cuffs are typical of Fath's work. The Musee de la Mode et du Costume, Paris, is organising a Jacques Fath retrospective due to open in 1992 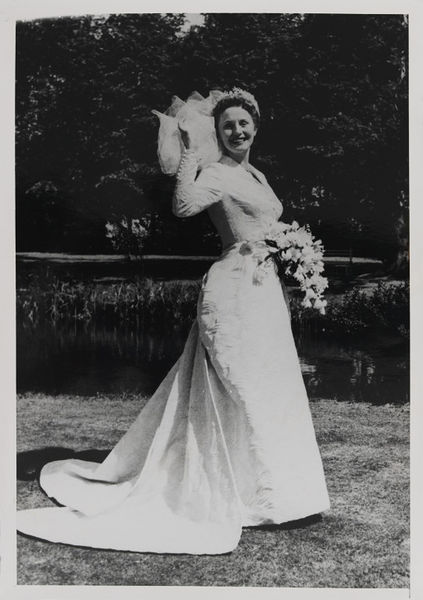