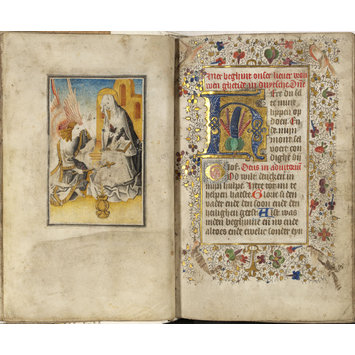 Book of Hours, in Dutch

This mid-15th-century manuscript is a book of hours, the most common devotional book used by laypeople in the late Middle Ages. Books of hours take their name from the fact that their core text, the Little Office of the Virgin, is divided into eight hours, from Matins to Compline, meant to be recited throughout the day and modelled on the Divine Office.
The miniatures, most likely painted in Delft, were executed on separate leaves, independently from the text, and then inserted in the appropriate places as part of the final assembly. This practice was quite common in the Low Countries throughout the 15th century, as it simplified and sped up production to meet an increasing demand for this type of books. While in France or England, the text of a book of hours was mostly in Latin, with the exception of a few prayers and introductory lines (rubrics, usually in red), numerous books of hours made in the Northern Low Countries were written in Dutch.
The restricted palette of the miniatures is characteristic of a workshop referred to as the ‘Masters of the Delft Grisailles’ and active ca. 1440-1460, probably in Delft. The figures are rendered in shades of grey against an ochre ground and blue sky, with details picked out in gold and colours. This workshop produced many copies of this set of images, probably using tracing to reproduce them; over fifteen other manuscripts have survived with this same cycle of images painted by closely related hands.

Artist: The cycle of images was painted by a several hands usually referred to as the ‘Masters of the Delft Grisailles’ active between ca. 1440 and 1460.

Netherlands (made)
Flanders (historical region) (made)
Delft (made)

(1) Embossed stamp on each miniature, 'Wm Clark, Engineer. Licensed Auctioneer and Valuator. Dunfermline'.
(2) Collection of George Reid who may have bought it from William Clark. Bequeathed to the V&A in 1902.

Books of Hours became so popular in the late Middle Ages that ways to standardise their production were adopted. In this example, written in Dutch, the miniatures were painted on separate leaves which were inserted into the volume as part of the final assembly. 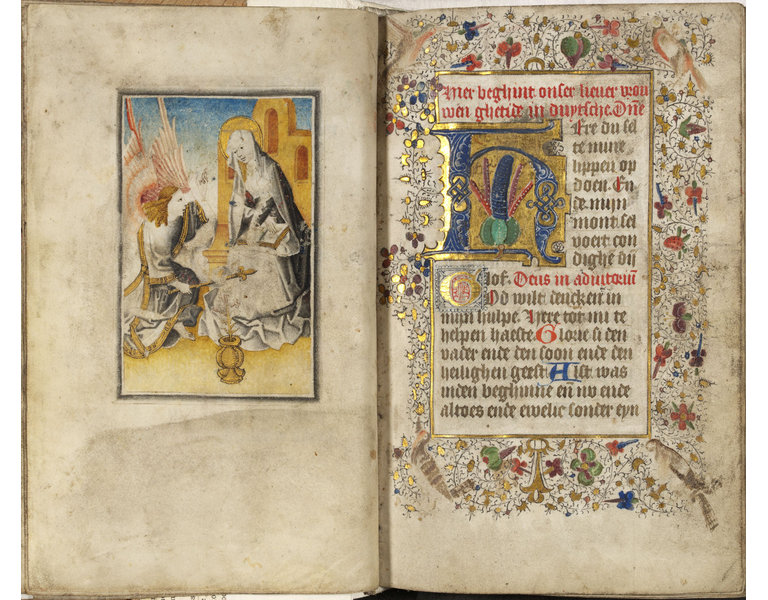