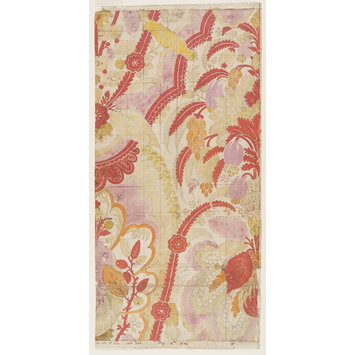 Design for woven silk from the 'Liddiard Set', in pencil, pen and ink and watercolour on laid paper, in pale, mid and dark yellow, orange, pink and red, depicting a profusion of stylised floral, foliate and decorative motifs.

The design is squared up in ink for cords and dezines.

See E.4515-1909, which is almost identical but has a different colour scheme.

Pencil, pen and ink and watercolour on laid paper

'[In James Leman's hand] 400 cords No 8 & 10
[In Joseph Dandridge's hand] 102 duz. May: 4th 1720'
Handwritten text including the date, on the front of the design, at the bottom, which was recorded by Natalie Rothstein in her publication, Silk Designs of the Eighteenth Century.

'[On the back, in James Leman's hand] Mr [name cut away]
I desire that you would keep the greene, the red & the pink
in lashes by themselves but the orange colour & the yallow
may be joy[ned] together in one lash'
Handwritten text on the back of the design, which was recorded by Natalie Rothstein in her publication, Silk Designs of the Eighteenth Century.

'59'
Handwritten text, which was recorded by Natalie Rothstein in her publication, Silk Designs of the Eighteenth Century.

In reference to this number, Rothstein stated that 'They [the designs in the 'Liddiard Set'] are mostly numbered heavily in pencil in the same way as the drawings in the Vanners Silks Set, which were all drawn by [James] Leman between 1706 and 1716.' The Vanners Set is now known as the Leman Album (after the designer, James Leman), which is also in the V&A Collection - E.1861.1 to 106-1991.

Squared up in ink for cords and dezines.
Handwritten makers' and designer's marks in ink, on the front of the design.

This design is one from a group of designs known as the 'Liddiard Set', which was given to the V&A by Mr G.W. Sherriff of Streatham in 1862. According to Luther Hooper, who compiled the first typescript catalogue of Spitalfields textiles designs in the Museum, on the cover of the folio (now missing) which contained this Set, was inscribed 'Pattern book of Liddiard & Co. Circa 1718'. In addition, most of the designs in this Set are inscribed in ink with 'L & Co.', as well as a number. The designs are also numbered heavily in pencil with a different number and have also all been numbered subsequently by the V&A - E.4440 to 4519-1909.

Natalie Rothstein researched and catalogued the designs for her publication Silk Designs of the Eighteenth Century. In it she states that 'the drawings in the Liddiard Set range in date from 1717 to 1722. They are mostly numbered heavily in pencil in the same way as the drawings in the Vanners Silks Set, which were all drawn by Leman between 1706 and 1716.' The Vanners Set is now known as the Leman Album (after the designer, James Leman), which is also in the V&A Collection - E.1861.1 to 106-1991.

Natalie Rothstein has identified many of the designs as the work of James Leman, although some designs have been attributed to Christopher Baudouin and Joseph Dandridge, both well-known designers in their day. Such attributions have been decided on the grounds of handwriting, signatures and abbreviations rather than due to stylistic considerations. She argues that 'There is no appreciable difference between the style of the drawings signed by Leman and those of Baudouin and Dandridge, and all attempts to divide the drawings in this Set into groups which could be attributed to the three designers on stylistic grounds have proved inconclusive. This is not so surprising, for the patterns drawn in any one year all conform to the general style dictated by the prevailing fashion, and since the designers in question were all working in the same city at the same time and for the same mercers, they would have all used the same professional conventions. Both the methods of drawing and the colour schemes used would be necessarily very similar. It does seem, however, that Leman frequently obtained from Dandridge the designs for especially rich silks using metal threads and the least naturalistic exotic motifs - such as E.4451-1909 - while Leman himself concentrated on the lighter silks with more delicate designs.'

Design for woven silk from the 'Liddiard Set', pencil, pen and ink and watercolour on laid paper, by Joseph Dandridge, Spitalfields, 1720

Attribution note: Natalie Rothstein researched and catalogued the designs for her publication Silk Designs of the Eighteenth Century. In it she states that 'some of the other drawings are not by [James] Leman and, indeed, two are almost certainly by Christopher Baudouin, while another is by Leman after a drawing by 'Mr. Dandridge', that is, Joseph Dandridge (c. 1660-1747) and another eighteen can be identified as Dandridge's work. Characteristic of the Dandridge inscriptions is the use of the curious abbreviation of 'Duz' for 'Dezine'. Furthermore, there is an instruction on one drawing in Leman's handwriting which reads 'Mr. Dandridge please find to finish some of this pattern as soon as may [be]'. This is good evidence that although he designed patterns himself Leman also engaged other designers to supply him. The two designers mentioned were both well-known in their day.'

'It is possible to identify Dandridge's handwriting because he compiled two unpublished studies of spiders and caterpillars in about 1707 of which the manuscripts are in the Sloane Collection in the Department of Manuscripts at the British Museum. Dandridge's writing is smaller than Leman's, the letters have large loops, but it is also slightly less literate; the letters are very seldom joined. His spelling is more erratic, especially in the use of double consonants. He uses a thicker quill and blacker ink. Dandridge uses a reversed 'e' and writes 'the' for the definite article while Leman often uses 'ye'. Dandridge writes 'yellow' and Leman 'yallow'. Certain words occur both in the manuscripts and in the inscriptions, notably the names of the various months. On one design the word 'middle' is written, which may be compared with the same word on p. 38 of his study of spiders and on pp. 3 and 41 of the manuscript on caterpillars. Dandridge often writes the name 'Mr. Lemmon' in the lower right-hand corner.' 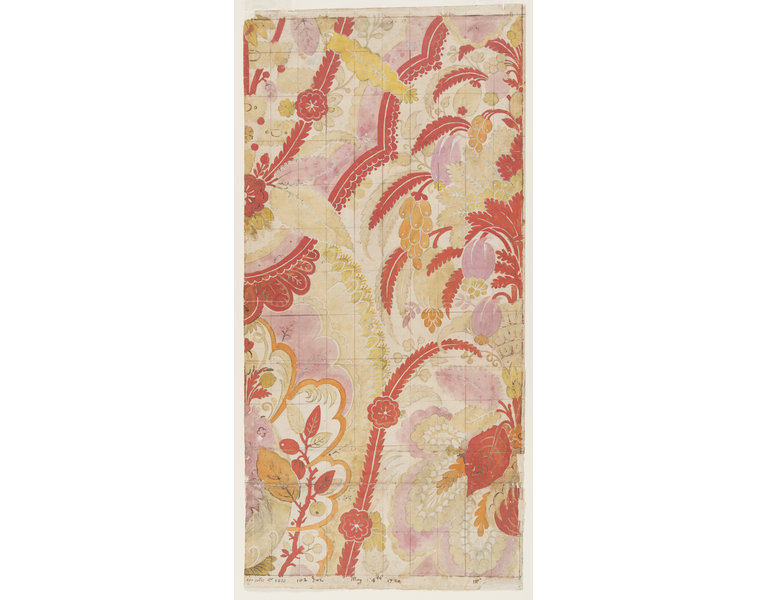