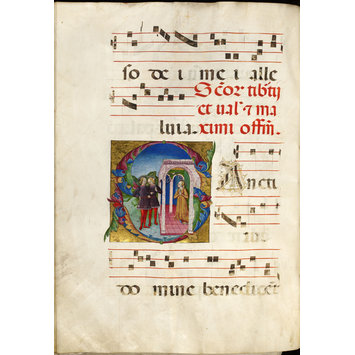 This gradual, a liturgical compilation of the songs and hymns used during the celebration of the Mass, was made c. 1470-1490 in Brescia. The wreath-enclosed medallion on the first page links it to the Dominican convent of San Domenico, in Brescia, as it shows a vision received by Fra Guala, Prior of San Domenico, at the death of Saint Dominic in 1221. Guala (c. 1180-1244) saw in a dream Saint Dominic climbing a ladder held at the top by Christ and the Virgin (fol. 1r). The image stresses Dominic’s holiness as well as his special connection with the convent.

Choir books tend to be large, as they were propped on lecterns in the church for members of the choir to sing from them. Vibrant historiated and decorated initials in gold and colours mark the main feasts of the liturgical year, as in the initial of Saint Michael slaying the devil at the beginning of the feast of the apparition of Saint Michael on 8 May (fol. 71r). Only on the first leaf does foliage spread into the borders while the initial features the Calling of Andrew and Peter, introducing the Vigil of St Andrew, the first feast in the Temporale (fol. 1r).

Number of lines: variable. Staves of 4 lines ruled in red.

Textual content:
ff. 1r-147v: Sanctorale, from St Andrew (30 Nov.) to Pope Clement (23 Nov.). Includes distinctive Brescia saints such as Apollonius of Brescia (f.98r, 7 July) and Procopius, Allesius and Philastor of Brescia (fol. 100v, 18 July).
ff. 148r-162v: Part of the Common of the Saints, with the Common of Virgins, Masses for the Holy Cross (f.153r) and the Commemoration of the Virgin for all seasons (ff.153v-162v).
ff. 163r-185v: The Creed, added in the 16th century and written over folios part of the original manuscript that have been erased.
ff.186r-189v: Introit, Offertory and Communion for various occasions. Added in the 16th century.

Brescia (city) (made)
Italy (Made for the Dominican convent of San Domenico in Brescia, made)

(1) Made for the Dominican convent of San Domenico in Brescia.
(2) Acquired by the South Kensington Museum (in the 19th century, perhaps before 1878).

Music was an important part of the liturgy. This book was made for the Dominican convent of San Domenico in Brescia and includes chants to be sung on the feast days of various saints. Choir books were usually large, allowing several singers to follow the music at the same time.

Italy, Brescia
Ink on parchment with pigment and gold
Illumination attributed to several artists including the Master of the Birago Hours, the Ippolita Sforza Master and Giovan Pietro Birago
Museum no. MSL/1963/3691 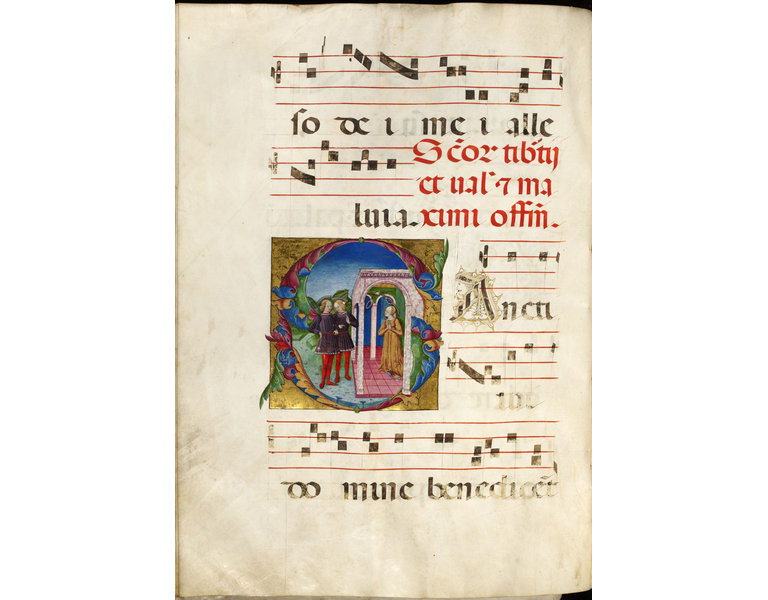