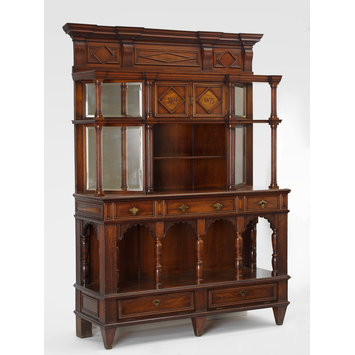 Designers
This cabinet was made in 1875 by ‘A. & R. Garrett, House Decorators’ and its design is attributed to Rhoda Garrett (1841–82) and her cousin Agnes Garrett (1845–1935), Britain’s first professional female interior decorators. The cousins were related through marriage to the architect John James Stevenson (1831–1908), who became a pioneer of the 'Queen Anne' style after he moved from Glasgow to London in the late 1860s. Beginning in about 1870–1, presumably through Stevenson's introduction, they worked in the London studio of the Scottish stained-glass designer and decorator Daniel Cottier (1838–91), one of whose business partners was an architect who had trained under Stevenson, John McKean Brydon (1840–1901). After this partnership was dissolved at the end of 1871, the Garretts worked in Brydon's studio, before setting up business at their home at 2 Gower Street in 1874. The cousins were part of an upwardly mobile group of artists and designers; they were prominent suffragists and Agnes’ sister, Elizabeth Garrett Anderson, was the first woman to qualify as a doctor in Britain.

Patrons
The Garrett cousins received many decorating commissions from friends, and notable clients included the composer (of, later, Jerusalem), Hubert Parry. This cabinet belongs to a group of furniture commissioned in about 1875 by a solicitor, James Samuel Beale, and his wife Margaret, for their house at 32 Holland Park. The upper doors of the cabinet are carved with the monogram of the couple, and the date 1875. Other pieces designed by the Garretts for the Beales, which included seating furniture, a corner cabinet and a bookcase, are now in the collection of the National Trust and displayed in Standen House, East Grinstead, West Sussex. Standen was designed for the Beales by Philip Webb in the early 1890s. Margaret Beale and her daughters embroidered a 'Lotus' wall hanging, designed by William Morris, which is in the collection of the Victoria and Albert Museum (T.192-1953).

Style
This cabinet is arguably the most important item of furniture to have been made by the Garretts' firm. Pauline Agius, in her book British Furniture 1880–1915 (1978; p.75) illustrated this cabinet, describing it as ‘a subtly proportioned, architectural piece in what the Garretts referred to as the ‘Queen Anne’ style.’ With its references to seventeenth- and eighteenth-century furniture, this cabinet does indeed reflect the influence of Stevenson and Brydon. Drawing inspiration from earlier periods, the upper section, with its canted mirrored sides, is loosely based on mid-seventeenth century English livery or ‘court’ cupboards (see, for example, V&A W.26–1938), while the arcaded lower section is probably based on an early eighteenth-century model (for example, see the bookcase on stand in a private collection, dated to 1710–30 and illustrated in Adam Bowett, Early Georgian Furniture 1715–1740, Antique Collectors’ Club, 2009, p.132, plate 3:72). The high quality of the (unknown) cabinet-maker’s work was also a hallmark of the Garrett style. In 1876 one of the popular Macmillan ‘Art at Home’ series of books on decoration, Suggestions for House Decoration in Painting, Woodwork and Furniture, was published under their name. It includes illustrations of furniture related in design to this cabinet. On p.52, the Garretts railed against the ‘machine-made carving, the tiles and the gilded panels which are displayed ad nauseam in what is advertised as “artistic furniture"', noting that ‘a cabinet wherein all the labour and cost is put into sound construction and delicacy of workmanship will give lasting pleasure to its possessor’.

Walnut and mahogany cabinet with bevelled mirror glass and brass hardware, in the 'Queen Anne' style.

The upper left door of the cabinet is carved with the monogram of James Samuel and Margaret Beale and the upper right door with the date 1875.

The cabinet was supplied by the firm of R. and A. Garrett, to their designs, and made in 1875 for James Samuel Beale (1840-1912) and Margaret Beale (née Field, 1847-1936), for their house at 32 Holland Park, London. In 1912 the Beales sold the house, moving some of its contents to their country residence, Standen, East Grinstead, West Sussex. This cabinet did not go to Standen, but was given to the Beales' eldest daughter, Amy Elizabeth Worthington (née Beale; 1871-1946), who moved into 1 St John's Garden in 1912. She sold this house in 1942 and moved to the White Cottage, Granchester taking the cabinet. On her death in 1946, the cabinet was inherited by her daughter, Phyllis Margaret Wager (née Worthington; 1912-2011). It was in Professor and Mrs. Lawrence R. Wager’s house in Durham and, from 1950, South Hinksey, Oxford. In 1967 the cabinet was given to Mrs Wager's son, Dr Jonathan Field Wager, who gave it to the Museum in 2017.

Cabinet supplied by Rhoda and Agnes Garrett for James and Margaret Beale, London, 1875

Emma Ferry, “Decorators May Be Compared to Doctors’: An Analysis of Rhoda and Agnes Garrett's “Suggestions for House Decoration in Painting, Woodwork and Furniture (1876)”, Journal of Design History, Vol. 16, No. 1, Domestic Design Advice (2003), pp.15–33.

Lisa Daniels, “‘Houses as they might be’: Rediscovering Rhoda and Agnes Garrett and their influence on the Victorian middle-class home”, The Journal of the Decorative Arts Society 1850 – the Present, No. 35, Omnium Gatherum (2011), pp.82–101. 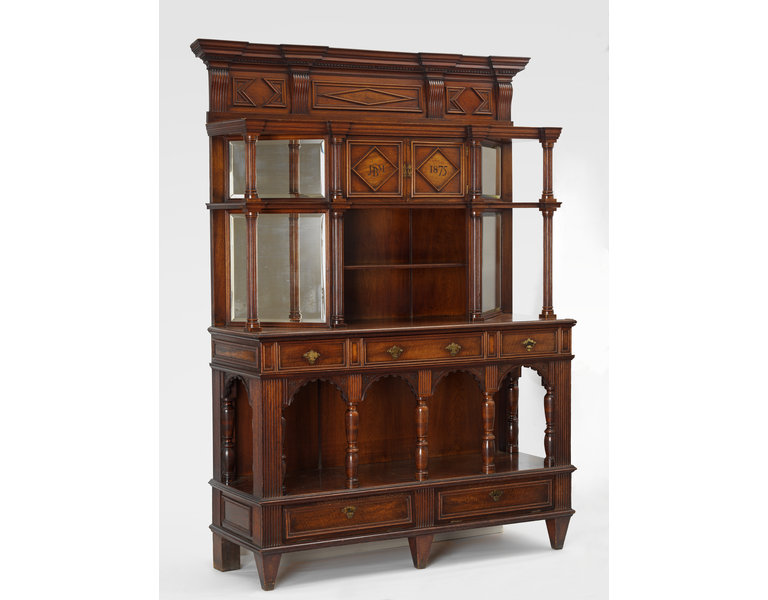