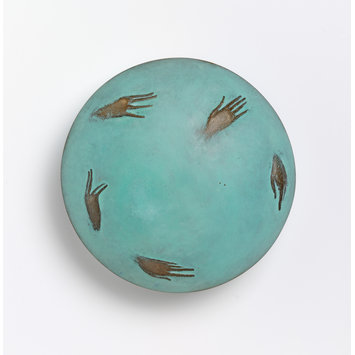 This medal, commemorating John Charles Robinson (1824-1913), was commissioned by the V&A from the artist Felicity Powell (1961-2015) in 2002, with funds donated from an anonymous donor. Robinson was Curator of Sculpture at the South Kensington Museum (now the V&A) and acquired many important works for the collection in the 1850s and 1860s. On the reverse of the medal the artist has used as inspiration the hands from the carved figures in the Annunciation by Arnolfo di Cambio of about 1300. Robinson bought this work for the Museum in 1861 (see inv.no.7563-1861). The reverse replicates the handwriting of John Charles Robinson taken from his letter, dated 6 September 1886, Madrid to the Museum, 'Now Is the Time'. Surface treatments greatly affect the viewer's appreciaion of a medal. Here Powell has applied a copper nitrate solution, under heat, to give a greenish-blue patination. Unusually, she has left the edge unpatinated. Instead, she has polished it and stamped it with Robinson's full name and dates, adding also the cryptic message 'From Few to Many'.
This medal was presented to Michael Gettleson in acknowledgement of his support of the V&A. For further entries relating to the processes involved in the making of the medal, see inv.nos. A.5 to A.9-2002, and A.10 to A.11-2004.

A circular cast medal c. 115 mm diameter, rounded profile, with copper nitrate patination to both faces and bright bronze edge.
Obverse: replicates the handwriting of John Charles Robinson (1824-1913) taken from his letter, dated 6 September 1886, Madrid, to the Museum, 'Now is the time'.
Reverse: five hands gesturing. Composition taken from The Annunciation (7563-1861 from the workshop of Arnolfio Cambio in a relief style inspired by the Donatello marble relief Ascension with Christ giving keys to St Peter (7629-1861)
Edge stamped: 'JOHN CHARLES ROBINSON 1824-1913' and 'FROM FEW TO MANY' and artist's mark 'FP 2002' and 'MICHAEL GETTLESON 2004'

This was the first commission of a contemporary medal made by the Sculpture collection. The commission was entirely supported by an anonymous donor. This medal, and 9 other medals medals were cast to be presented as a gift to major donors of the Museum.

Unlike traditional commemorative medals, this object does not carry a portrait of the person, and unlike most medals it does not have an obvious obverse and reverse sides. The phrase 'Now is the time', (taken from a manuscript letter dated 6 September 1866 written by Robinson to the Museum and now in the National Art Library) underscored by Robinson to stress the urgency and strength of feeling expressed by the words, is as much a portrait of the man and his state of mind at the time of writing, as a physical likeness. This side is actually the obverse. The reverse of the medal is inspired by objects Robinson acquired for the collection. The shallow relief style of the hands is derived from Donatello's The Ascension with Christ giving the Keys to St Peter (Museum no. 7629-1861) and the gestures depicted by the hands are taken from an Annunciation group from the Workshop of Arnolfo di Cambio (Museum no. 7563-1861). In the artist's own words, 'the hands signify the generosity of gesture and of passing the legacy on for future generations'.
The phrase on this medal ‘FROM FEW TO MANY’, words chosen by the artist, can be interpreted in several ways, but one of its meanings is a reference to the anonymous donor whose generosity began the whole story.

The medal links contemporary medal-making with the history of the V&A. It commemorates John Charles, later Sir Charles, Robinson, 1824-1913, first curator at the South Kensington Museum (now V&A) from 1857 to 1863 and who had a significant impact in developing the collections of Sculpture, particularly of the Renaissance.

Medal (The John Charles Robinson medal), bronze with a copper sulphate patina, designed by Felicity Powell, 2002, cast by Alan Dunn, inscribed and presented to Michael Gettleson in acknowledgement of his support of te V&A. 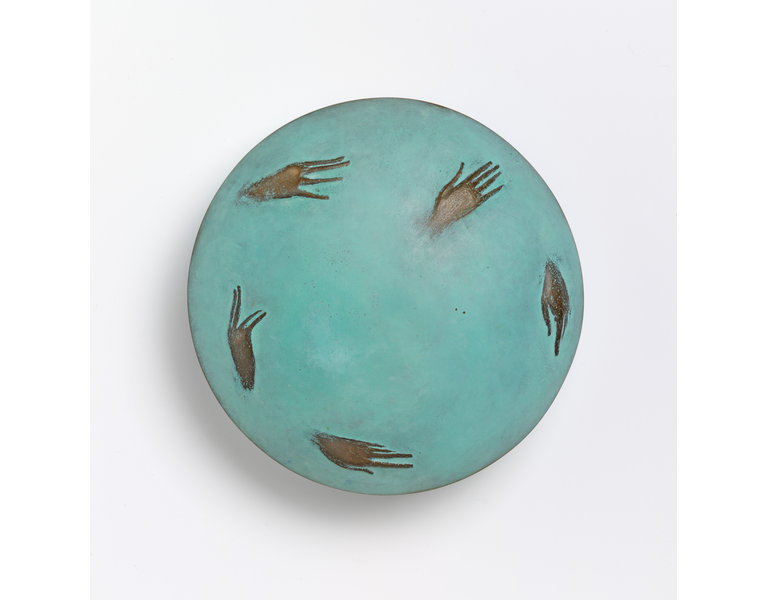