If you would like a larger file, or to use the image in other ways, contact our Licensing team.
BETA
+18
BETA
+16
images
On display at V&A South Kensington
Jewellery, Rooms 91, The William and Judith Bollinger Gallery
This object consists of 2 parts, some of which may be located elsewhere.

1840-2 (made)
Queen Victoria's sapphire and diamond coronet was designed by Prince Albert in 1840, their wedding year. It matched the sapphire and diamond brooch that Albert gave to Victoria the day before their wedding. Standing as the symbol of her royal status, the crown was worn around her chignon on the back of her head in 1842 in the first official portrait of the young Queen to be painted by Franz Xaver Winterhalter. Multiplied in copies and engravings, the portrait became one of the defining images of the queen in Great Britain and overseas.

The design of the coronet, based on the Saxon Rautenkranz which is borne on Prince Albert’s coat of arms, is documented as being by the Prince. The jeweller was Joseph Kitching. Most of the stones came from jewellery given to Victoria by King William IV and Queen Adelaide.

The use of the coronet in the portrait by Winterhalter is a brilliant device, an affirmation of Victoria’s authority as sovereign which does not detract from the charm and beauty of her as a young woman. The coronet is one of the most significant jewels of her reign, part of the story of the young Victoria, who before her widowhood delighted in coloured gemstones. In 1866, just over four years after Albert’s death, she wore the coronet on top of her head at the first Opening of Parliament she felt able to attend since her loss. 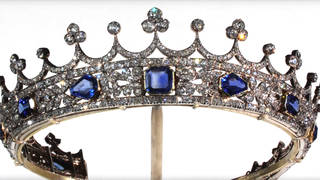