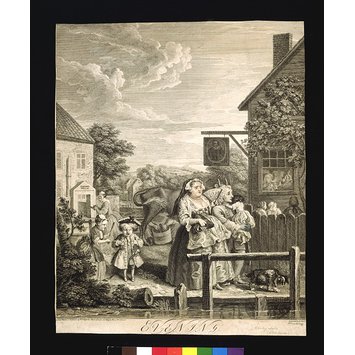 The Four Times of the Day: Evening

Hogarth's satirical composition shows a scolding wife with her husband. They have just reached Sadler's Wells, a popular watering place in the 18th century for the middle classes.

When this engraving and etching was made in 1738 most prints were produced in one colour. This example however is printed in three. Most of it is black, but the man's hand are printed in blue to show that he is a dyer by profession. The husband looks as though he has horns because his head is lined up with a cow being milked in the background. Horns on a man indicate he is a cuckold (his wife is being unfaithful). The woman's face and neck are printed in red. This either suggests she is suffering from the heat, or she is enflamed by lust/passion and is being unfaithful to her husband.

This engraving depicts a couple out for an evening stroll with their children. They have just passed a house called 'Sadlers Wells', and are walking along a path next to the river or stream passing by an inn. Inside the inn, and in its garden, can be seen a crowd of customers.

The family are well dressed. The woman is plump and is wearing a headdress. Her face is coloured red. She is holding a fan in one hand and a three-cornered hat in the other. The husband looks pale. His hands are coloured blue to suggest that he is a dyer by profession. He looks to have horns because his head is lined up with that of a cow being milked in the background. In his arms is a female child. Their dog is just in front. Behind them two children, a boy and girl, are arguing. The boy has a toy soldier and a hobby horse, but appears to be crying. A girl is scolding him. Like her mother, she is also carrying a fan.

In the background another woman stands in front of the porch of a house called 'Sadlers Wells'. The background shows a country landscape of fields and trees.

Engraving and etching, black, red and blue ink on paper

SADLERS WELLS
Lettered within the image

Engraving and etching depicting 'Evening' from 'The Four Times of the Day'; designed by William Hogarth; engraved and etched by Bernard Baron; London, 1738.

Hogarth's satirical composition shows a scolding wife with her husband, recognisable as a dyer from the blue on his hands. They have just reached Sadlers Wells, then a popular watering place on the outskirts of London. Hogarth contrasts the unhappiness of the couple with the pleasure associated with such a place of public entertainment. [] 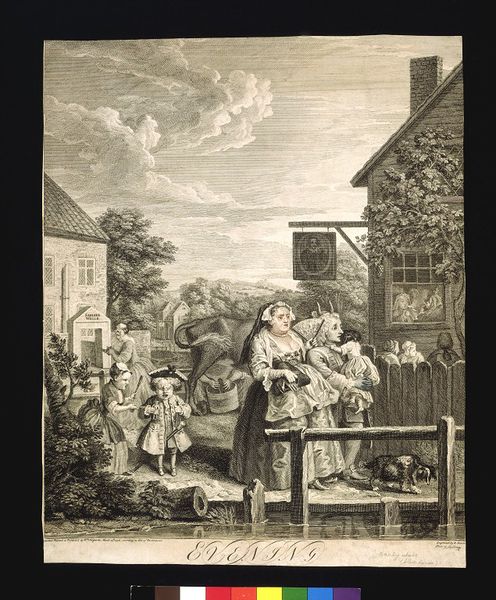