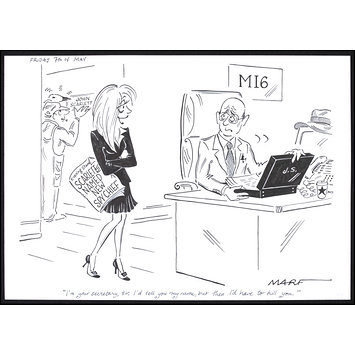 This cartoon appeared in the Evening Standard on 7 May 2004, and is artist Marf's take on the current news story. As she describes it: 'A web of spin develops to protect Tony Blair and his labour government from being blamed for the mistaken claim that Iraq had WMD (Weapons of Mass Destruction) – which justified attacking Iraq without UN support. Blair blames MI5 for the lack of intelligence – passing the buck to one of the most secretive branches of the state, thus adding to the confusion. A new director, John Scarlett, is appointed to MI5, promising a new “transparency”, but he is known to be a Blair cronie and hardly one to challenge Blair’s actions in Iraq.'

'Marf' drew daily topical cartoons for the Evening Standard between March 2002 and August 2005, moving to the Londoner's Diary page in August 2003. The drawings cover key political and social issues of the period, providing a vivid and often hilarious response to the main news of the day. The Evening Standard is London's only evening newspaper, publishing up to five editions a day. In Marf's own words: 'The cartoonist needs to keep up with the rapid pace of event.'

Black and white line drawn cartoon showing the interior of an office at MI6. Newly appointed chief John Scarlett sits at his desk with an open briefcase. His secretary, blond and wearing a black skirt suit with pleated skirt and black and white buckled stilettos, stands next to him with arms folded and holding an newspaper. A workman in overalls and cap is drilling a new nameplate to the office door. Next to Scarlett are a computer screen, on which is blanced a wide-rimmed hat, a telephone and a polystyrene cup holding tea or coffee.

Some lines have been blocked out with liquid paper, and faint underdrawing can be seen.

FRIDAY 7th of MAY
Written in pen top left

"I'm your secretary, sir. I'd tell you my name, but then I'd have to kill you."
Written in pen across bottom; title to piece

Donated by the artist.

Attribution note: for publication in newspaper
Reason For Production: Commission 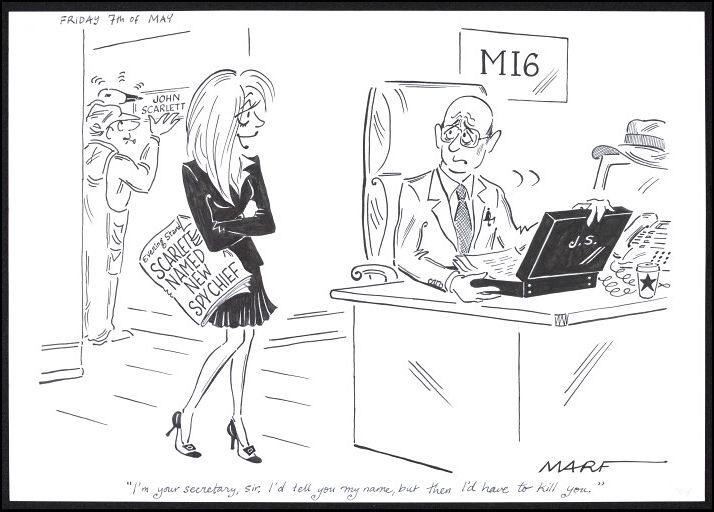