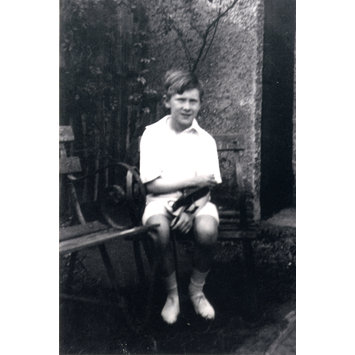 This photograph is an early 21st century reproduction of a 1930s photograph depicting a young boy named Donald Millbank. Donald tragically died at a young age; he was killed during the Second World War in 1940 when a bomb made a direct hit on his house. Donald was remembered by his family as a bright, kind, funny boy who was artistically talented.

This photograph is one of two depicting Donald, and is part of a collection of objects that belonged to Donald which includes several of his colourful drawings, the nightgown he wore as a baby, three memorial cards made for Donald following his death and several of his school exercise books from the late 1930s. Donald's accomplished drawing skills are evident from his artwork and the illustrations and drawings in his school books. These objects provide a snapshot of a young boy's life and work from a turbulent time in British history and they are a rare survival.

A black and white photograph of portrait orientation showing a boy seated on a chair, probably outside, with a bench to his proper right and a doorway to his proper left. The boy is dressed in a short sleeved shirt and shorts and holds an object in both hands on his lap; he looks towards the camera.

The following was written by Christine Adams, Donald's niece and donor of his childhood objects:

Donald was born in Surrey in 1927. His father, Fred, was an officer for the Port of London Authority and his mother, Lou, stayed at home to look after her family. He had an older brother and sister, Alan and Mildred (Millie - known as 'Weenie' by the family as she was a particularly tiny baby.) Another younger brother died at a few months old.

On 18 November 1940, when Donald was 13, he was killed by a bomb dropped directly on the house. His sister Weenie, a few years older, was buried under the house with him for several hours, holding his hand. She felt him grow weaker as he gradually passed away. His mother never recovered from losing two children and was in mourning for the rest of her life, only wearing black.

Donald grew up in the years before the Second World War, in what was then the village of Mitcham, in a family house with a rabbit, cat and dog. His family remember a bright, kind, funny boy, artistically talented as can be seen by a selection of [his] drawings.

His brother Alan became a teacher and Weenie a nurse - both were excellent painters. As for so many children on both sides of the War, Donald was denied his life but his potential was clear.

The original photograph was taken in the 1930s and a reproduction was printed in 2008 by Christine Adams, niece of Donald Millbank and donor of his objects 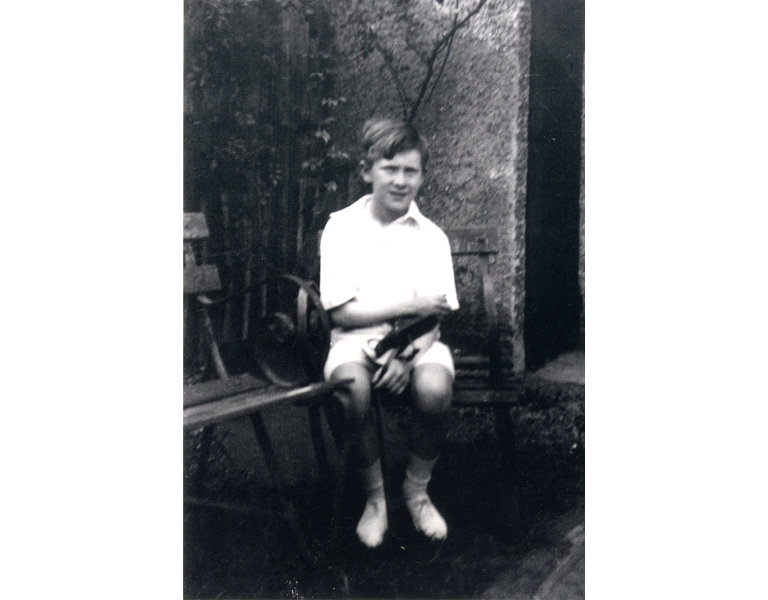