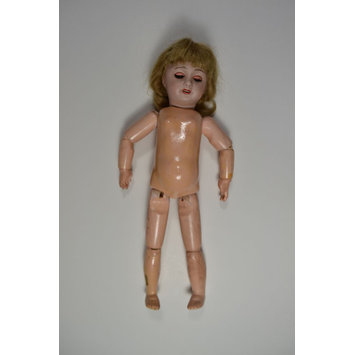 Female fashion doll with painted composition body and bisque head. The doll wears wig of what appears to be real blonde human hair. She has blue glass sleeping eyes, a plump face, and a partly-opened mouth revealing four upper teeth, her lips are red and her cheeks pink. The composition body is jointed with elastic at the shoulders, elbows, wrists, hips and knees. It is painted a pinkish colour all over to give it the skin tone of a caucasian.

1¼
Moulded at base of doll's neck

1
Moulded on underside of doll's foot

This doll belonged to Nike de Bellaigue, who donated it to the Museum.

Regarding the doll, Mrs. de Bellaigue recalled in July 2015:
'the Bleuette doll was sponsored by the French children's newspaper La Semaine de Suzette. My elder sister and I were at school in London at the French Lycée and my mother had arranged, through French friends, a subscription to the newspaper in 1950, about a year before I was given the doll.

We webt on holiday to Binic, on the north coast of Brittany, at the end of July 1951 and, when we arrived, my Bleuette was sitting on my bed, dressed in a smart green dress (still in her wardrobe [see B.172-2017]) with a matching hat and white socks and shoes (these tiny accessories were always a delight to me). I was thrilled. It was just before my ninth birthday in August. Sadly no photograph was taken of me with Bleuette to record the event.

The joy of Bleuette was that she was jointed which gave her more flexibility than other dolls - and then there were the clothes that could be bought... These were specially designed for her and beautifully made. Just like the couturiers, two collections a year, summer and winter, were produced and you could chose from a catalogue. The clothes in Bleuette's suitcase [see B.190-2017] would have been acquired between 1951 and 1954. They represent presents from kind friends and relatives, mainly my mother and grandmother. I also bought a few of her clothes with my pocket money. Among my favourite outfits were the sailor suit [see B.157-2017] and Bleuette's winter coat with its jaunty hat [see B.156-2017].

I would just mention that the yellow jersey trousers and top [see B.164-2017], bought for her at the Paris "Flea Market" (in Spring 1954) and the white angora cardigan [not acquired], bought in London, are not part of Bleuette's exclusive collections, nor is the suitcase, acquired separately but always used to store her clothes.'

Bleuette was produced between 1905 and 1960. The doll was the invention of Paris publisher Henri Gautier, whose publishing house, Gautier-Languereau, produced La Semaine de Suzette, a magazine intended for young girls. The content of the magazine included patterns for making outfits for Bleuette, encouraging readers to make their own clothes for their dolls. More than a thousand patterns were produced, alongisde a biannual catalogue with which ready-made outfits could be purchased.

Bleuette was an important forerunner to Barbie and the modern idea of a fashion doll. Its association with La Semaine de Suzette is also important within the history of girls' education and pastimes as it encouraged readers to use patterns and to learn how to sew. 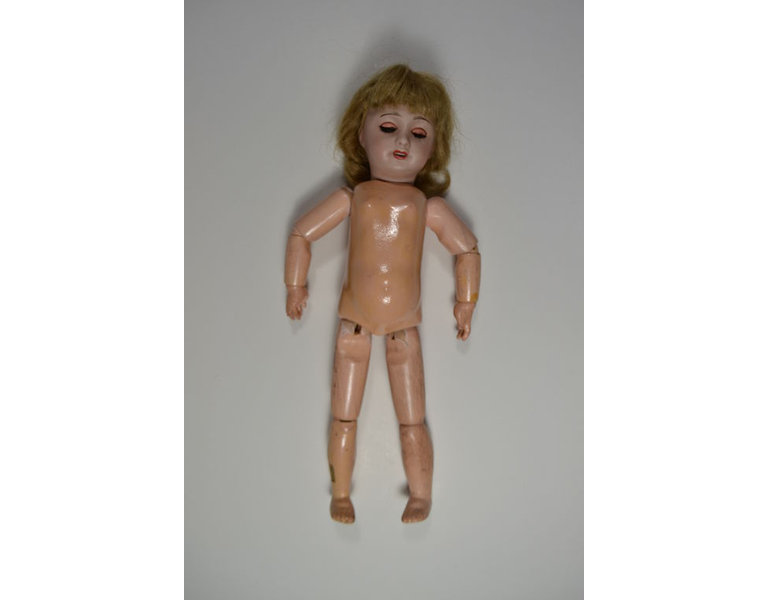