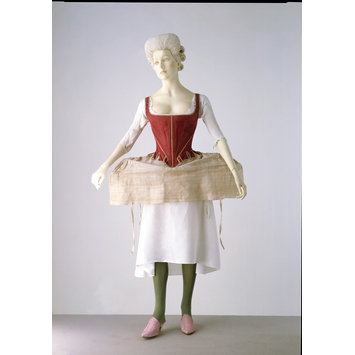 Women's underwear served two purposes in the 18th century. The first function, carried out by the shift or smock, was to protect the clothing from the body, in an age when daily bathing was not customary. Made of very fine linen, the shift was the first garment put on when dressing. Over the shift went the linen stays, heavily reinforced with strips of whalebone. Their purpose was to mould the torso to the fashionable shape and provide a rigid form on which the gown could be arranged and fastened. The hoops were also made of linen and stiffened with whalebone or cane. They shaped the petticoat of the gown to the appropriate silhouette. At various times during the 18th century, this profile varied from round, to square and flat, to fan-shaped.

Side hoop petticoat covered in pink striped linen. Reinforced with baleen, and kept in shape with tapes inside. Hand-sewn.

According to the original bill it was purchased on 16 February 1778 from A. Schabner Riding Habit and Robe Maker at his Warehouse in Tavistock Street Covent Garden by Miss Davis as a Pink Holland Hoop for 10s 6d.

Side hoop petticoat covered in linen, retailed by A. Schabner, England, 1780s

Women's underwear had two functions in the 18th century: hygienic and structural.

Stays and hoops were structural garments, designed to create the fashionable silhouette. Stays, the antecedent of the corset, formed a rigid foundation for the gown. The hoop supported the volume of the petticoat, as the skirt was known in the 18th century.

A Miss Davis ordered this hoop, with a gown and petticoat, from a London robe maker. 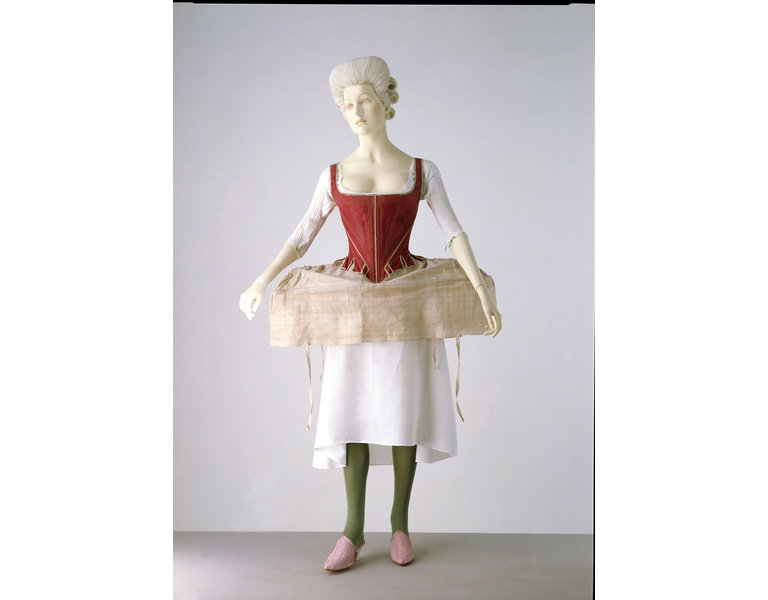