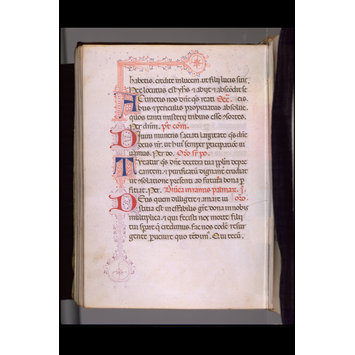 A Missal is a liturgical book containing all the texts, chants and prayers necessary for the celebration of the Mass. This example was written and illuminated in Northern Italy, probably Milan, in the early 15th century. Its calendar includes numerous Milan saints, such as Satyrus, Galdinus, Maternus, as well as Pavian saints, such as Syrus of Pavia. The manuscript is unusually small for a Missal, which may indicate that it was a priest’s personal copy or made for use at a subsidiary altar.
Beautiful historiated initials extend their foliage and flowers into the borders and introduce the main events of the liturgical year. The Nativity (f. 38r), for instance, illustrates the main Christmas Day Mass, while the Feast of Saint John the Baptist begins with a depiction of the saint holding a book on which lies the Agnus Dei (f. 305v).
The stylistic characteristics of these initials argue for an attribution to the Master of the Modena Hours, usually identified as Tomasino da Vimercate. This artist, active in Lombardy from ca. 1390 to the 1420s, worked on several manuscripts made for the Visconti family, rulers of Milan, and their entourage.

Artist: Attributed to Tomasino da Vimercate (the Master of the Modena Hours) and assistants.

Italy (made)
Milan (made)

Illumination by the Master of the Modena Hours (Tosamino da Vimercate?) The missal contained the texts needed for the priest to celebrate Mass throughout the year. The illustration introduces a prayer for the Feast of Corpus Christi. It shows a gold monstrance enclosing the Eucharist and placed on the altar. The relatively small format of our missal indicates that it was for an individual priest, or for use at a subsidiary altar. 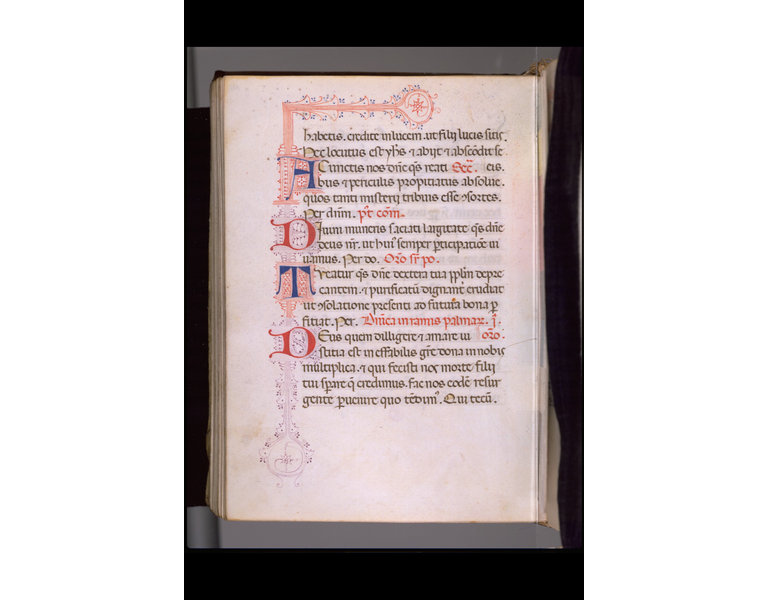