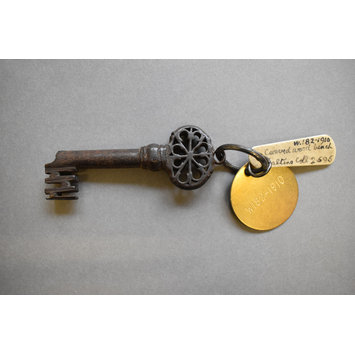 When this bench-chest (cassapanca) was acquired by the Museum, it was believed to have been made during the sixteenth century in Florence. Several well-known museum pieces of the same type were internationally famous during the late 19th century. However, it is now thought to have been created, probably between 1850-80, using new woodwork made with authentic 16th-century techniques. It may also incorporate some genuinely old woodcarving. Suspicious features are the lack of realistic wear on the seat, plinth and feet, its unusually small proportions (more attractive to potential collectors living in relatively small rooms), and the brown stain, which was perhaps applied to create a sense of uniform age.
The collector George Salting probably purchased this between 1884 and 1895, a period when his accounts show him to have been particularly interested in Renaissance furniture.

On loan to Hexham Old Gaol.

Coffer-bench (cassapanca) of carved walnut. There is a wrought iron key. The back and ends of the bench are carved with bands forming circular and oval compartments with buds in the spandrels; the surface is further decorated with enriched mouldings, and with a mask at the front of each end. The front of the coffer is similarly ornamented but has bosses instead of masks; the inside of the coffer is plain. A slightly moulded footboard projects in front.

Cassapanca (coffer-bench) of cassone form with arms and back superimposed. The cassone element is panelled with plain, rectangular panels on the ends, and on the front two oval compartments flanking a roundel with entablature above (with a sequence of cyma mouldings above an overlaid coin pattern, centred on a quatrefoil) and pedestal below (with mouldings above and below fluting with turned bosses). With an integral seat-lid (of three planks, supported by two nailed battens with lock), held on two twisted ring hinges, with a lip moulding of torus over cavetto, over a shaped dentil. The wide stiles with a rectangular panel containing a gadrooned rosette. The interior plain with white filler in various areas.

The back and arms element as follows: the inner faces of the arms and back panelled with two oval compartments flanking a roundel, the spandrels filled with stylised, tulip-like flowers; with an entablature running along above the back which consists of a flat top edge of solid walnut, and a sequence of cyma mouldings above an overlaid coin pattern, centred on a quatrefoil. A pedestal to this upper section also consists of mouldings above and below fluting with turned bosses. The arms in the form of a simple ionic capital with (on the forward face) a carved female mask with headdress and fabric swag below the chin.

The back of the upper section is formed by two poplar planks, and a narrow batten above, to which the arm units are nailed. The back of the cassone is formed by 3 planks of walnut(?) with a bevelled top edge, with nailed softwood battens at each end. The 5 bottom boards run front to back, and are nailed up and meet in bird's mouth joints. The cassone fitted with a lock, hasp detached from the lid, both apparently original.

Apparently with a dark stain overall.

Although this was examined in rather poor light, there appears to be a variety of brown tones on the surface. The lack of realistic wear or repairs (especially to the seat on its original ring hinges) and plinth (where heels would have knocked against it), unusually small proportions, and varied surface tone all suggest that this was created using new woodwork made with authentic techniques during the 19th century, possibly incorporating the two mask carvings which feel plausibly late 16th century. A famous published piece like the cassapanca (Florence c1550) now in the Kunstgewerbe museum in Berlin may have provided the inspiration for it.

Salting probably purchased this between c1884-1895, the period when his accounts (Guildhall Library) show him to have been particularly interested in renaissance furniture. 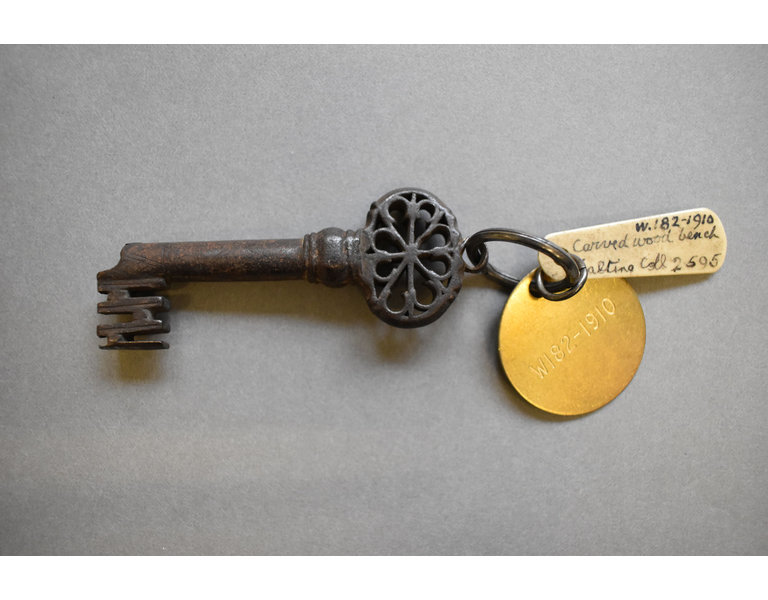