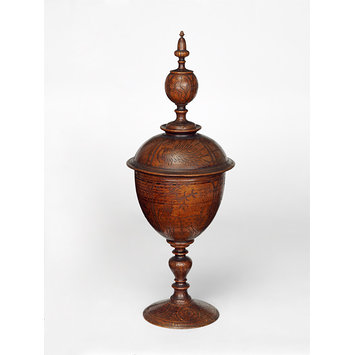 This cup and cover with removable spice-box bears the arms of both King James I and the Prince of Wales, the future Charles I. A number of similar cups are known to exist; this cup is one of four in the collection of the V&A. Most are made from turned pearwood, incised with heraldic animals, and date from the early 17th century. The closeness in design of the majority of these cups, and of their date of production, may suggest that they came from a single workshop, or were the work of a single craftsperson.

It is not certain exactly what this type of cup would have been used for. The most regular interpretation is that they were communion cups used by private chapels, or by chapels that could not afford silver. However, the use of wood as a material for holding the host had been forbidden by the Canons of Winchester since around 1071, as its porous nature would cause the wine to be absorbed.

Other theories concerning their use range from the humdrum (being prototypes for silver communion cups) to the glamorous (the insignia of an exclusive society). The latter notion holds some weight, it has been suggested that the armorials are the crests of founding members of such a society.

Standing cup and cover with spice box. Turned pearwod, engraved with the arms of Great Britain and Ireland, the coronet of the Prince of Wales, heraldic birds and animals, quotations from Scripture, and poetry relating to the subject of the Eucharist. On the stem there are carnations, and on the upper side of the foot roses. The globular spice box attaches to the cover using a hit-and-miss closure, and the acorn-shaped finial in turn screws into the top of the spice box.

Upon the spice box there are four panels containing:
1) a fox rampant
2) a parrot statant
3) a panther sejant
4) a goose statant

Upon the bowl:
1) the arms of England surrounded by a garter and the motto, and supported by a lion and a unicorn.
2) a hart gorged with a coronet and chained, the chain running from the coronet and between its forelegs and over its back (Lisle)
3) the Prince of Wales' feathers issuing from a crown.
4) a wyvern holding in its mouth a hand (Herbert)

Upon the cover:
1) a salamander crowned
2) a griffin couchant
3) a porcupine crowned (Sidney)
4) an elephant passant (Knollys)

'C.P.'
Carolus Princeps
Charles the Prince
Over the arms of the Prince of Wales

'First Seeke the kingdom of God. Search the Scripture'
Inner border of cover

'Of all the Drinkes that ever yeet have Binn None may compare unto the [one word] indeed Which seteth free and Clenseth from all Sinne: Such as do feele their Great and extreme Neede'
Upper border of cup

'BEATI PACIFICI'
Blessed are the peacemakers
Below the royal arms of England.

'God prosper all true Braches of that Vine: Who turned Water to Exceeding Wine: to bear much fruit'
Upper edge of foot

'Thy Glory to advance: in Mercy have them in rememberance: Prosper the armies that thy Bat + Battailes fight: all such as Walke as Children of the Light: But such as do not trueth + light Esteeme: are none of Christs he did not them redeeme: Let them + that are redeemed Praise the Lord: such as do find sound + comfort by his word: such as the word giveth not...'
Underside of foot, in five concentric borders. Inscription may have been continued on another cup of the pair.

The exact use of this type of cup is not clear. It had been thought that they were fashionable communion cups, although the use of wood as a vessel for the host had been forbidden by the Canons of Winchester as early as 1071. Pinto relates that they could have been the cups of Royal Cupbearers, and though some of the crests relate to holders of this office, most had held it before the reign of James I. The likelihood of their having been prototypes for silverware is thrown into doubt by the lack of any known replicas made in silver.

Pinto proposed that they may have been 'part of the insignia of some exclusive 17th century society', similar to, or perhaps an ancestor to, the Honorable Order of Little Bedlam, a social club founded by the 5th Earl of Exeter in 1684.

This cup is decorated with various animal crests, possibly those of founder members of an exclusive society. They include the elephant of the Knollys family, Earls of Banbury, and the mythical wyvern of the Herbert family, Earls of Pembroke, here shown with a hand in its mouth. The exact purpose of this cup is not known.

Turned and incised pearwood
Made in England

The decoration would most likely have been executed with a hot thin steel implement on a carefully prepared surface, which would have been very smooth and probably glazed first. This would have been difficult to achieve, as heat could not be controlled very carefully, and so the designs may have been first finely gouged or incised and then later darkened. 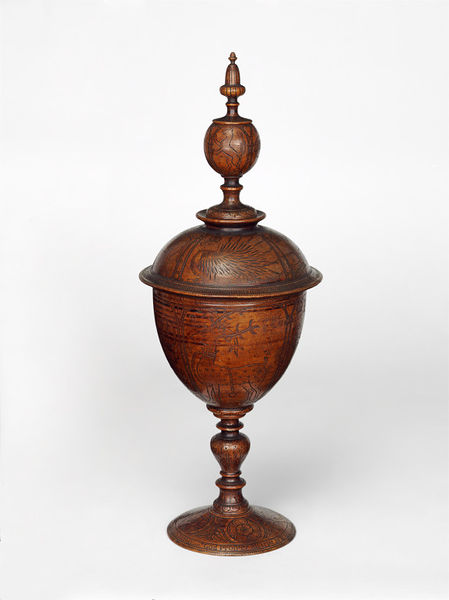