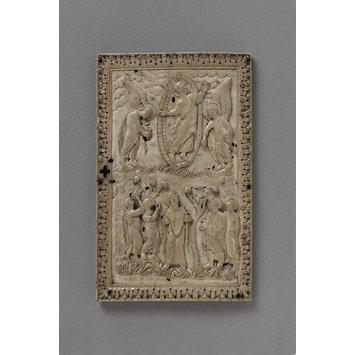 Shortages of ivory in Western Europe meant that existing panels were often re-carved. This plaque was worked three times. It is possible that the plaque first formed the centre of the front cover of an early Apocalypse manuscript, and that mus. no. 254-1867 - with the same original dimensions - belonged to the back. By the middle of the 9th century the plaques have reached the vicinity of Reims and were slightly cut down and transformed into the inside faces of a pair of doors, being carved on the other sides with the 'Transformation and Ascension of Christ'. The objects to which these doors were attached must remain a mystery. At a later date the Carolingian doors were reused once again, being converted back into book-covers.

Ivory panel one side showing interlace with birds and animals the other side showing the Ascension. Two double framed small panels within borders of scroll ornament, the upper panel contains two birds, the lower two goats, caught within a field of interlacing ornament issuing from their bodies. The top border of the plaque was cut down when it was re-carved on the back with The Ascension. The re-carving on the back has left the background of the plaque dangerously thin, resulting in several perforations.

It has been proposed that the plaque was originally set on the back cover of a manuscript and that the preceding piece formed part of the front (see: mus. no. 253-1867). These plaques must have been removed from the book cover within 50 years were re-employed as doors in the third quarter of the ninth century. At a later date the Carolingian doors were reused once again, being converted back into use on a book cover: the pin-holes in the corners and the sides relate to this final use and it is likely that the face of the plaque was rubbed down at this time.

Williamson, Paul. Medieval Ivory Carvings. Early Christian to Romanesque. London, V&A Publishing, Victoria and Albert Museum, 2010, pp. 153, 4 and 190-193, cat.nos. 37 and 46
Inventory of Art Objects acquired in the Year 1867. Inventory of the Objects in the Art Division of the Museum at South Kensington, arranged According to the Dates of their Acquisition. Vol. 1. London: Printed by George E. Eyre and William Spottiswoode for H.M.S.O., 1868, p. 9
Longhurst, Margaret H. Catalogue of Carvings in Ivory. London: Published under the Authority of the Board of Education, 1927-1929, Part I, p. 65
Backhouse, Janet and Webster, Leslie (Eds.), The Making of England: Anglo-Saxon art and culture AD600-900
Beckwith, John, Ivory Carvings in early medieval England, 700-1200, London, Arts Council of Great Britain, 1974 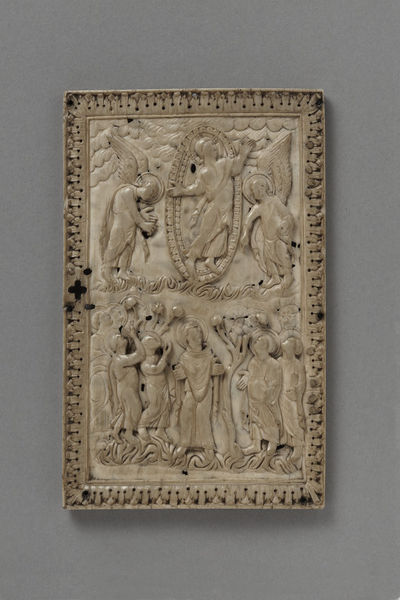