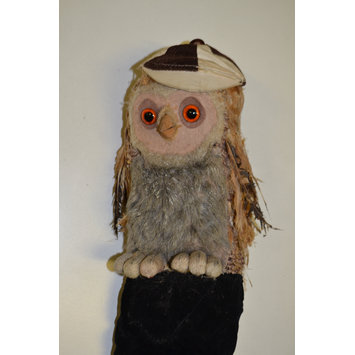 Ollie Beak was a star of British children’s television between 1962 and 1966, ‘co-presenting’ many live programmes alongside Wally Whyton (1929-1997). Ollie was made in 1962 by the artist and puppetmaker Peter Firmin, and his wife Joan, originally as a substitute for another popular character, Pussycat Willum. Wally Whyton named him Ollie Beak, and suggested he display a cheeky personality and speak with a Merseyside accent. Ollie is perhaps best remembered for his partnership with Fred Barker, a dog puppet, and for appearing on ‘Tuesday Rendezvous’ with fellow Liverpudlians The Beatles on their first nationally-broadcast television appearance on 4th December 1962.

Owl hand puppet, made from mixed materials. The main body of the puppet is a knitted wool tube, with a metal zip running up the back, below which is a second tube of black velvet. The head, sides and back are entirely covered light brown chicken feathers. The puppet's stomach is covered with grey synthetic fur. At the base of its stomach are its feet, made from wood covered with knitted cream wool. The face is of dark pink wool felt, with circles darker pink surrounding the puppet's orange and black glass eyes. The face is mounted onto a wooden plate, cut to its shape. The beak is made from a wooden clothes peg, it is operated using a lever-and-spring mechanism inside its head which causes it to open and close. The face is encircled with light grey, short-haired synthetic fur. The head is formed from the inside by a grey card 'cranium', and a wooden spar from front to back. There is a peaked cap of cream cotton and brown corduroy, with a marbled red plastic button on top, which is placed on the puppet's head.

Peter Firmin recalled in 2017: 'Because the timing of these live shows was flexible, Wally used to have a live chat with the puppet Pussycat Willum to fill a few minutes. When Willum's animator, Janet Nichols, went on holiday I was asked to make a simple puppet to replace him. Wally suggested an owl. My wife Joan knitted a wool bag as the basis for the body which I clothed with chicken feathers, a felt face and a clothes peg for a beak. Very simple. Wally's wife Mary made him a school cap and Wally gave him a cheeky character, a northern accent and called him "Olly [sic] Beak."'

The Television Act of 1954 was designed to break the monopoly of the BBC over Britain’s television programming. Independent Television (ITV) began broadcasting as an alternative, commercial provider in 1955. Small Time, regular programming designed for under-fives, akin to today’s CITV, debuted on that network the same year. Small Time had several incarnations through to its cancellation in 1966. The puppet maker and artist Peter Firmin (b.1928) devised a nursery rhyme-inspired segment, The Musical Box, first shown in 1959 with Rolf Harris as its presenter. Harris was replaced in 1960 by the musician Wally Whyton (1929-1997), who became one of the best-known faces of early British children’s television.

Broadcast live, the host interacted with the puppets in a variety of segments. Joe Crow first appeared in March 1960. The puppet was apparently purchased in Germany by Whyton, and Firmin created a scarecrow named Simon for it to perch on. Whyton conducted impromptu conversations with both of these characters as part of the show.

The most popular character in the show’s early phase was a cat named Pussycat Willum. When Willum’s animator, Janet Nichols, went on holiday in 1962, Firmin was asked to create a puppet to temporarily replace him. Whyton suggested an owl character, and a puppet was created by Firmin and his wife, Joan, with a school cap added by Whyton’s wife, Mary. Whyton himself invented the name Ollie Beak, and provided him with his cheeky character and Merseyside accent. Ollie Beak proved so popular in his initial appearances that he became the star of his own show, The Five O’Clock Club, later renamed Ollie and Fred’s Five O’Clock Club to reflect Ollie’s popularity, and that of his ‘co-host’, the dog Fred Barker. This new show was actually a later incarnation of Small Time, it was broadcast every Tuesday and Friday from 1963-1966.

In 1962, Peter Firmin was also asked to create another new children’s programme, so he devised The Three Scampis, about an out-of-work circus act, for which he also made the puppets. This show was the first appearance of the still-popular character Basil Brush, performed by Ivan Owen (1927-2000). Another of the Scampis was an aggressive Scottish hedgehog named Spike McPike, performed by Wally Whyton. 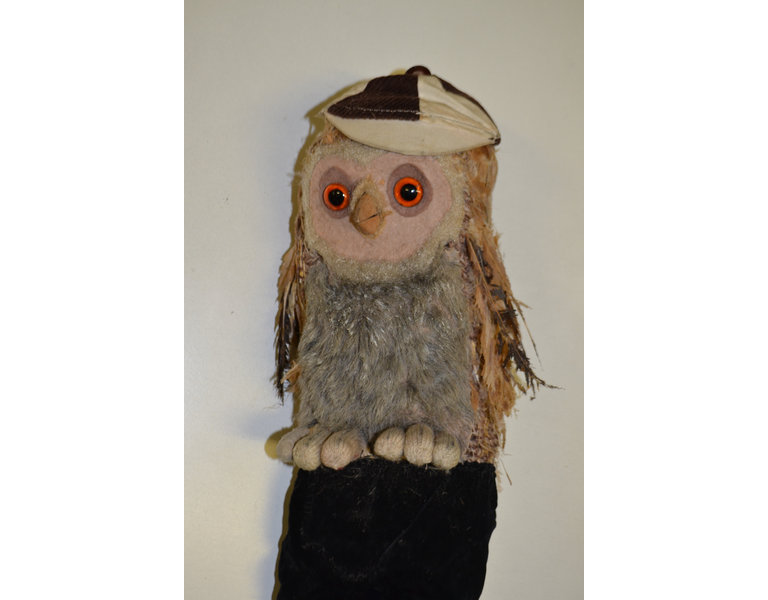