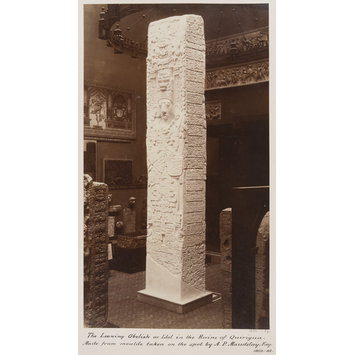 Cast of Leaning Obelisk or Idol in the Ruins of Quirigua

Alfred Percival Maudslay (1850-1931), a British colonial diplomat, explorer and archaeologist was one of the first modern archeologists to study the Mayan civilization. He began his career working for the colonial service in Trinidad, Queensland, Fiji, Tonga and Samoa, but in 1880 he left the colonial service and first travelled to Guatemala. He explored Mayan ruins at Quiriguá and Copán with fellow archaeologist Frank Sarg, and travelled with him to Tikal.

Maudslay used a variety of techniques to record his archaeological finds including photography and casting. He took photographs to record the sites he visited, and made good use of the new ‘dry plate’ photography process, which involved fewer chemical processes for the photographer to undertake at the point of capture, and was therefore easier to use whilst on expeditions.

In 1885 Maudslay persuaded the V&A (at that time known as the South Kensington Museum) to accept his finds, casts, moulds and photographs. Unfortunately, the carvings, casts, objects and moulds took up a great deal of space, and over time were increasingly viewed as incongruous in terms of the rest of the Museum’s collections. They were eventually passed on to the British Museum, and a few are now on display there. The photographs stayed at the V&A.

Despite some discord between Maudslay and the V&A, Alfred Maudslay later bequeathed many examples of Mexican and Guatemalan textiles and Mexican ceramics to the Museum.

Maudslay’s work on Mayan ruins and his collecting and recording of objects laid the foundations for later scholars in attempting to decipher Mayan written language, and his books and casts remain in use by epigraphers today. Although much of his material has been transferred to the British Museum, these photographs remain, evidence not only of his association with the V&A, but of the ways in photography was used as a tool by archeologists and scholars.

A sepia-coloured photograph of a cast of an obelisk carved with Mayan motifs on display with other Mayan artefacts.

'The Leaning Obelisk or Idol in the Ruins of Quirigua / Made from moulds taken on the spot by A.P. Maudslay, Esq.'
ink, bottom centre mount

14.
Cast of Leaning Obelisk or Idol in the Ruins of Quiriguá, Guatemala
Photographed by the South Kensington Museum Photographic Studio, about 1889

The artoworks displayed in the courts during the 19th century were much more varied than they are today. This photograph shows a cast of Mayan carving from Quiringua, made by one of the Guintini family - part of a network of Italian mould-makers in London. The explorer and archaeologist, Alfred Percival Maudslay, hored Giuntini to accompany him on an expedition to Guatemala. The Mayan casts they recorded were first displayed at South Kensington and then transferred to the British Museum in the 1930s. 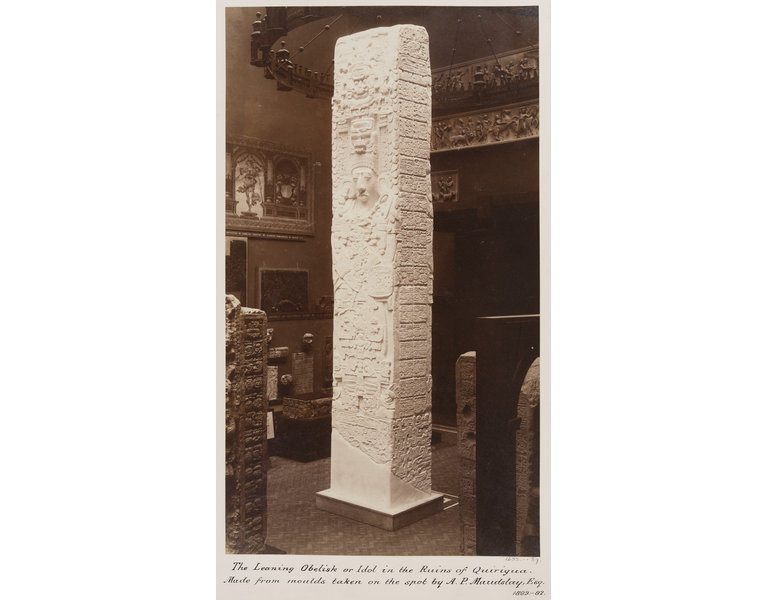