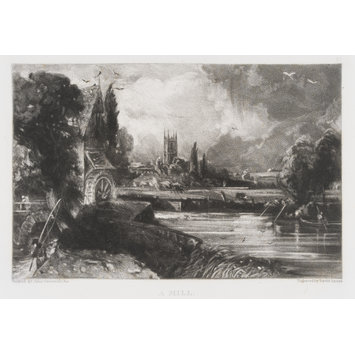 This print is from one of the most important series of mezzotints ever to be published.

Towards the end of his life, John Constable embarked upon a project to supervise and publish a series of mezzotints based on a selection of his oil sketches, finished paintings and possibly one or two watercolours and drawings. Various Subjects of English Landscape, Characteristic of English Scenery, from Pictures Painted by John Constable, R.A., better known as English Landscape, consisted of 22 landscape subjects executed in mezzotint by David Lucas, organised into six parts and published between June 1830 and July 1832. Constable revised the series in 1833 in what is referred to as the second edition. After his death in 1837 there were subsequent reprints of the material, plates begun during his lifetime were completed and published and Lucas went on to engrave and publish entirely new plates.

Drawing upon the precedents of Claude Lorrain and J.M.W. Turner, the ageing and still misunderstood Constable used English Landscape to explain and justify his life’s work. Choosing subjects of both a personal and historical significance, he sought to promote the appreciation of England’s scenery and, more importantly, to highlight nature’s guiding principle of chiaroscuro showing the influence of light and shadow upon landscape.

For this magnus opus Constable engaged the services of David Lucas, a young and little-known mezzotinter and former pupil of Samuel Reynolds, who rapidly became a master under Constable’s tutelage not so much copying as translating the painter’s original works into a new graphic language. Through a brilliant use of mezzotint, and occasional drypoint and etching, Lucas conveyed the tactile quality of Constable’s brushstrokes and both his sharp contrasts of light and dark and subtle tonal gradations. The project was a commercial failure for Constable while Lucas never again reached the artistic heights he employed in this endeavour. He worked for lesser artists after Constable’s death and eventually died in Fulham union workhouse.

Print from a folio with green and brown binding and green wrappers, containing a booklet and 39 mezzotints on paper.

This print is from the Lennox-Boyd collection of mezzotints by David Lucas, chiefly after John Constable, acquired in lieu of Inheritance Tax by H M Government from the estate of the Hon. Christopher Lennox-Boyd and allocated to the Victoria and Albert Museum in 2015. Lennox-Boyd formed the finest collection of British mezzotints in private hands anywhere, totalling approximately 50,000 prints. While his main focus was mezzotints, his collection also contained 18th century picture frames, antique women’s shoes, fans and printed handkerchiefs. He also collected printed ephemera, examples of which the museum has also acquired, and watercolours in the 1970s. In 1963 Lennox-Boyd bought Sanders of Oxford, on the High Street, transforming it from a bookshop into a premier seller of fine prints, maps, engravings and 20th-century etchings. He published several works including Theatre Prints in the Age of Garrick and George Stubbs: The Complete Engraved Works.

The original work for this plate is unknown. Lucas had almost finished the plate by late 1829 and it was first published in the first number of the first edition of English Landscape. 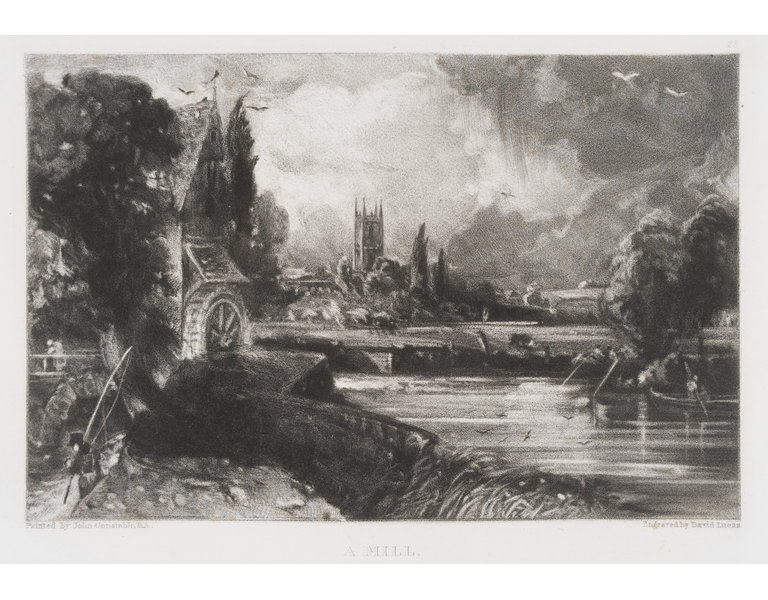