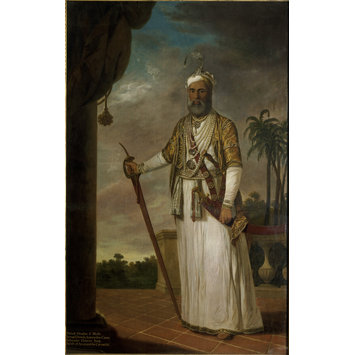 This portrait is an example of the early introduction of western painting to Indian courts. It depicts Muhammad Ali Wallajah (r.1749-1795) who was installed as the Nawab of Arcot and the Carnatic by the British after he committed support for their campaigns in the Deccan. Unable to sustain the payments he had promised, he was subsequently forced to surrender most of his kingdom to the East India Company. The British artist, Tilly Kettle, was the first significant British portrait painter to work in India. Kettle had landed in Madras (modern Chennai) in 1769 and stayed there for two years painting some fine portraits of East India Company officials as well as scenes of local life. His success in Madras led to the commission for this imposing portrait of the Nawab. It shows the ruler, dressed in lavish robes and jewels, standing imperiously on a terrace with classical columns and balustrade. At his neck, the Nawab wears one of the famous Arcot diamonds.

Warren Hastings paid 1000 guineas for this painting which was subsequently sold at Christie's for 7 guineas. It was bought by Stephen Sulivan (1741-1821), Judge-Advocate in India. Mrs Archer (1979, p. 71) notes that Stephen was the son of Laurence Sulivan, one of Kettle's sponsors. It was inherited by his son, Laurence Sulivan (1783-1866), and then by Miss Charlotte Sulivan. 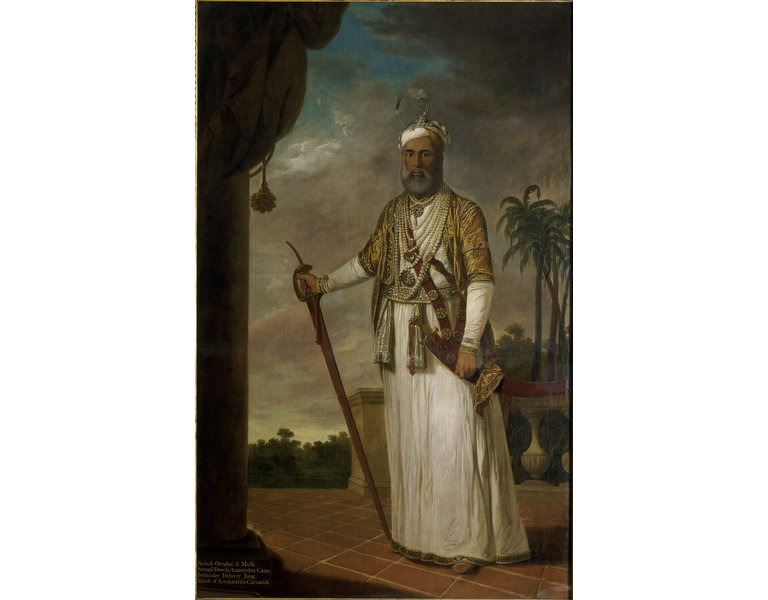