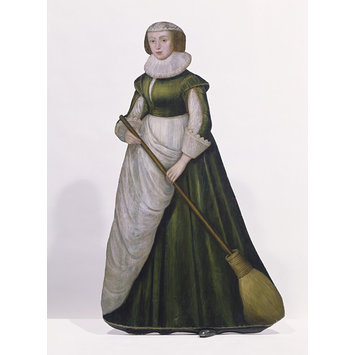 Dummy boards are life-size, flat, wooden figures painted and shaped in outline to resemble figures of servants, soldiers, children, and animals. The taste for using illusionistic painted figures as a form of house decoration probably originated in the trompe l’oeil, or life-like interior scenes painted by Dutch artists in the early 17th century. Dummy boards continued to be produced into the 19th century. They were placed in corners and on stairways to surprise visitors, or in front of empty fireplaces in the summer. Most were made by professional sign-painters, who also produced the hanging street signs prevalent until the late 18th century.

The clothing on this figure dates from about 1640 and suggests that she is a wealthy lady rather than a servant, although she is holding a broom. The Museum also has a companion board with the same figure holding a mirror (Museum no. W.89-1921), so the pair probably represent 'industry' and 'vanity'.

Life-size figure of a woman with a ruff and a cap, holding a broom, painted on a wooden board cut to shape.

Screen representing a lady as a housemaid with a broom. She wears a plain green gown, probably intended for satin, the sleeves slashed showing white inner sleeves, the bodice close-fitting, with braided shoulder-pieces, and slightly open in front. Her short, wavy, auburn hair is covered by a close-fitting cap embroidered in black; she has a falling collar and cuffs edged with scalloped needle-point lace and a hair bracelet on the wrist; the large white apron, tucked up, is similarly edged with lace. Feet modelled in wood, left foot projecting.

This dummy board and its pair came from East Sutton Park, Kent, the family of Sir Robert Filmer, a prominent royalist who died in 1653. It was bought in 1898 at the sale, near Maidenhead, of Mrs Sankey, who was a daughter of Sir Edmund Filmer.

There is a similar figure of a sweeping woman at Lullingston Castle, Kent, and a related figure at Stoneleigh Abbey, Warwickshire. One was at Cobham Hall until it was auctioned in 1957. Although servants formed a large proportion of dummy boards, these figures do not appear to be servants at all, judging by their expensive dress. Figures of ladies sweeping may have been set up to encourage house-maids in their work. This figure has a companion dummy board, of a lady holding a mirror, so together they probably represented 'vanity' and 'industry'.

Dummy board figure of a woman with a broom, British ca.1640 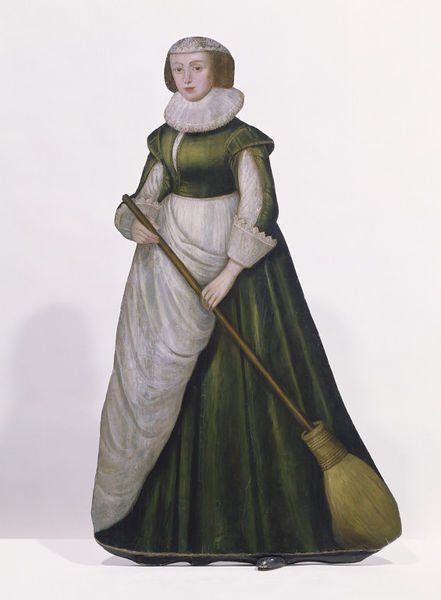