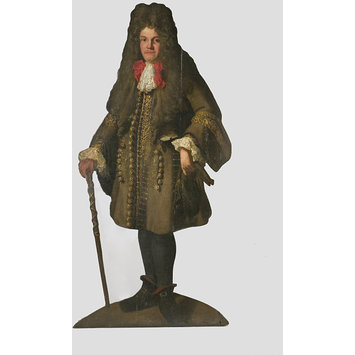 Man with a Cane

Dummy boards are life-size, flat, wooden figures painted and shaped in outline to resemble figures of servants, soldiers, children, and animals. The taste for using illusionistic painted figures as a form of house decoration probably originated in the trompe l’oeil, or life-like interior scenes painted by Dutch artists in the early 17th century. Dummy boards continued to be produced into the 19th century. They were placed in corners and on stairways to surprise visitors, or in front of empty fireplaces in the summer. Most were made by professional sign-painters, who also produced the hanging street signs prevalent until the late 18th century.

This example depicting a man with a cane is of particularly high quality and is painted on canvas attached to the board to prevent shrinkage.

Life-size cut-out painting of a man holding a cane, standing on a small section of ground. He is clean shaven, with brown eyes and is wearing a full bottom wig, lace cravat over a red tie or bow, and a green coat trimmed with gold embroidery on the sleeves, front and buttons. Black hose and shoes with buckles. In his left hand he holds his gloves, and in the right a cane. The back has been painted reddish brown.

Painted on canvas glued to softwood. The board is composed of four vertically-grained boards which are butt jointed and glued together. Additional elements are added for the cane and the tips of the base. Across the bottom the board is fixed to a roughly shaped wood block painted black, bearing the remains of nails and glued paper or leather. Across the back are three modern stabilising battens inset horizontally at knee, hip and midriff levels. The board does not now stand stable by itself, and though it may once have done it probably always needed a support bracket of some kind.

Condition
Various vertical splits. Some filler in knotty areas at the back. Various retouchings and patchy varnish. Several fixing holes on the back.

Dress
The man is wearing a loose, unwaisted green coat with low, vertically placed double pockets. Decorative button-holes and thread-wrapped buttons trace the front of the coat, with matching gold thread work trimming the large, turned back cuffs. The coat is worn unbuttoned, over a long-sleeved waistcoat whose similarly rich decoration is glimpsed through the coat’s open front and emerging out of the coat’s wider sleeves. Ruffled lace shirt sleeves are revealed at the wrist. At the neck, a lace cravat sits atop flat red ribbons; such ribbons were originally functional, acting as a ‘cravat string’ until the 1680s when their presence, often stacked in multiples, became merely decorative. In the left hand gloves are held, trimmed with a particularly long bullion fringe. In the right hand a fashionable cane is held, decorated with ribbon in a criss-cross formation, indicative of a man who is concerned with style and his outward appearance.

A black hat trimmed with white feathers is cradled in the crook of the arm, though the shape and style are obscured. A full-bottomed wig flamboyantly curls around the crown, framing the face. This middle-parted style stands tall in two peaks, concluding near the waist in pronounced ringlets on each side. The man is relatively clean-shaven, the hint of a thin moustache just visible, the fashion for which ceased around 1685. Black stockings are worn, along with black, square toed shoes featuring a small square buckle. The shoe’s uppers are turned down to reveal a red lining; known as a ‘cupids bow tongue’, this style was popular after 1690 and reserved for gentlemen of the court or nobility.

The man depicted displays elements of older sartorial styles than 1690; for example, the loosely cut coat and vertically positioned pockets typically pre-date 1690. Worn just below the knee with a matching waistcoat, the coat is indicative of the 1670s-1680s, whenceforth a more defined fit with shaped waist emerged. The layered lace cravat and ribbons further points towards the 1680s, as this style was replaced by a long, twisted steinkirk cravat throughout the 1690s. Other stylistic indicators however suggest a later date of around 1690-1700, such as the shoe style with distinctive folded down tongues, and the peaked wig. The ostensibly middle-aged man has seemingly retained some stylistic elements of his youth, and presents a smart, yet under-stated appearance. The heavily fringed gloves held just-so, the beribboned cane, and impressive wig all point to a man of means, though one who perhaps prefers to leave more flamboyant flourishes such as extra ribbons, echarpe, and shoulder knots, to younger men.

Oil on wood lined with canvas

Bought for £20 from Messrs Stair and Andrew, 25 Bruton Street, London W (RF 31/9850)
Condition: 'worn, varnished & cleaned at Museum'.
Ralph Edwards' report 21/9/1931 noted 'the best example of its type and period which I remember to have seen. It is a most interesting "costume piece", while the painting, in spite of some slight retouching, is in excellent preservation and by an unusually skilful hand.' Mr Wace dated the costume (and Mr Long the painting) to the 1690s. Price considered to be reasonable.

This dummy board is of unusually high quality. The finely detailed and idiosyncratic features of the man suggest that it represents an actual person as a board 'portrait', presumably commissioned by the sitter or his family. It is painted on canvas attached to the wood, to minimise damage caused by shrinkage.

Dummy boards, sometimes referred to in the 17th and 18th centuries as ‘cut-out pieces’ were evidently produced in large numbers from at least the early 17th century in the Low Countries, a tradition exported to England soon after. Arnold Houbraken claimed in 1719 (De groote schouburgh der Nederlantsche konstschilders en schilderessen) that the artist Cornelis Bisschop (1630-74, Amsterdam and Dordrecht) had invented them, but it seems more likely that he popularised them. In 1545 Serlio had recommended the use of cut out and painted ‘statues’ and sleeping creatures for the theatre stage. The term 'dummy board' is a 19th-century invention. Edwards discusses the likely ancestry of dummy boards in theatre staging, trompe l'oeil painted effects, and the extrapolation of Dutch paintings of domestic interiors.

Dummy boards in the northern European tradition were primarily decorative, domestic jokes to amuse or fool viewers, placed around the home and sometimes fitted to hold a lamp or other suitable fitting. Their success depended on their life-like appearance, judicious positioning and suitable lighting. In low-lit interiors it is easy to see how convincing they might be. John Evelyn recorded in his diary on 23rd September 1673, 'We went to see Paradise, a roome in Hatton Garden furnished with the representations of all sorts of animals, handsomely painted on boards or cloth, & so cut out & made to stand & move, fly, crawll, roare & make their severall cries, as was not unpretty: though in itselfe a meere bauble, whilst the man who shew'd, made us laugh heartily at his formall poetrie'. (Quoted in Graham, p6). Edwards discusses the appetite among art patrons - and the general public - for the amusing, the whimsical, and the eccentric..'

Construction
Dummy boards typically consist of ½” wooden board, sometimes using tongue and grooved construction), cut to shape, feather-edged and reinforced with battens. Edwards suggests that ealier boards could be as thick as 1½" thick (In the mid-18th century, one maker recommended the use of plane-tree over deal, as a more robust material.) As early as c1630, batches of the same outline might be cut out. The front was smoothed and the surface either primed and then painted in oil colours, or painted directly onto the wood, and probably varnished. Sometimes canvas was glued over and painted, a practical way to minimise the effects of splitting or warping rather than evidence of a canvas portrait having been reused. A foot block is usually added, and a hook or ledge on the back to secure the figure a short distance from a wall ‘so that it could throw a convincing shadow’ (Graham p. 8).

The makers of dummy boards remain largely unknown, as they are consistently unsigned and their provenance limited. Most dummy boards are likely to have been painted by a sign-painter, a trade that was forced to diversify in 1763 due to new regulations restricting overhanging shop signs. (Professional artists dabbled in the genre, for example Rembrandt (Edwards p85-6) and Thomas Gainsborough, an example of whose work is held by Christchurch Mansion, Ipswich). They might be sold through cabinet-makers or upholsterers. A typical mid eighteenth-century trade card runs: 'John Potts Upholder, at His Paper Hanging Ware¬house The Black Spread Eagle King Street, Convent Garden, London. Makes and sells Upholstry and Cabinet Goods of all kinds in the genteelest taste; with the greatest choice of Paper Hangings, &c for Exportation. NB Ornaments for Halls Ceilings Staircases and Chimney Boards: at the lowest PRICES. Goods appraised and Funerals perform'd.’ (Quoted by Graham p.9)

Standard types of dummy boards, sometimes apparently produced in pairs, include: servants eg V&A Girl peeling apples, W.43-1929, and including sweeping ‘maids’; housewives eg V&A figures representing Vanity and Industry, W.89 and 90-1921; soldiers who were often placed to ’guard’ the doorways of inns, houses and military premises such as the Tower of London, or the figures of Highland soldiers used to advertise tobacco shops, or sailors outside port taverns; children, often in pairs, whose low height may have made them especially useful to conceal fireplaces when not in use; church altarpiece figures of Moses and Aaron placed alongside the Ten Commandments and Lord’s Prayer, eg V&A W.8 and 9-1939; Jewish pedlars advertising jewellers’ or curiosity shops eg V&A W.89-1926; animal figures especially cats and dogs for example the V&A pig W.81-1926. Also known are individual 'portrait' figures - as W.62-1931 may be - such as the "peice of ye Dutchesse of Richmond at length cut out" recorded at Cobham Hall, Kent in 1672 (cited by Edwards p.88).

The earliest dummy boards tend to be of a finer quality painting, thicker board, and depict real-life wealthy individuals. Later dummy boards were typically mass produced in designs emerging out of workshops, crudely painted with unidentifiable features. Edwards discusses the discrepancy between the apparent date of some dummy boards, based on dress, and their actual date of fabrication, citing the 1760s trade card of John Potts illustrating a figure in Elizabethan dress, and suggests that some figures wearing much older dress may have been intended to pass as household 'ghosts' (p.89). Dummy boards in England were evidently falling out of use for domestic amusement by around 1850 but copies or fakes continued to be made in the later ninenteenth century, and since 1900.

Clare Graham, Dummy Boards and Chimney Boards. Shire Album 214, Aylesbury: Shire Publications Ltd, 1988. 32 p., ill. ISBN 085263921X, illustrated p.22 'The figure is perhaps an individual portrait. It has been painted on canvas applied to wood.'
Notes, p.23 that 'A few very well painted figures must be individual portraits: the Cobham Hall, Kent, inventory of 1672 refers to a dummy board portrait of the Duchess of Richmond.'
Percy Macquoid and Ralph Edwards, The Dictionary of English Furniture from the Middle Ages to the Late Georgian Period. Second revised edition 1954. 3 Vols. (London, Country Life Ltd, 1954), vol. II 'Dummy-Board Figures', fig.5
'Another class of figures is those representing men and women. One of the most imposing of these is the full-length gentleman, 6 feet 2 inches in height, dating from about 1690. He has a full-bottom wig, lace cravat over a red tie, or bow, and green coat with gold embroidery on the sleeves, front and buttons. In his left hand he holds his gloves.' 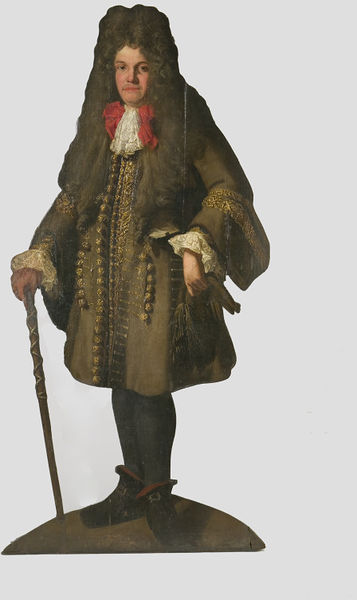