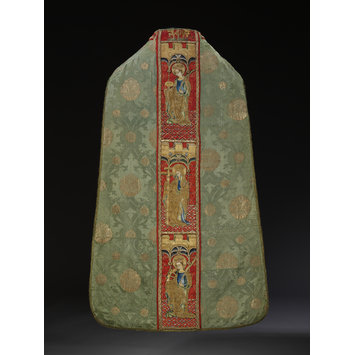 This is a chasuble, the vestment (priestly garment) worn by a Catholic priest when celebrating the Mass (the main service of worship). Prior to the 1960s, the priest stood facing the altar with his back to the congregation, so the back of the chasuble was visible most of the time. The front is more worn than the back because it has rubbed against the altar. Simple columnar embroidered orphreys (decorative bands) adorn the back and front. All of the figures are of female saints, which may suggest that the orphreys were intended for vestments for a convent.

The silk of the chasuble was probably made in Italy, which boasted the most sophisticated centres of silk manufacturing in Europe in the 15th century. The shape dates to the 17th century or later. Precious silk and fine embroidery, especially containing metallic threads, were used economically and were often recycled.

Shield- or violin-shaped chasuble of mid-green silk damask brocaded in silver gilt; its outer edge is trimmed with a silver-gilt and green fringe; its column orphreys are of red plain-weave silk, embroidered in silver-gilt thread and coloured silks on linen and silk; its lining is of blue glazed linen.

The silk damask has a symmetrical pattern created through the ground weave and supplementary brocading wefts. The ground is a classic European pattern of scrolling stems which form compartments. These compartments enclose symmetrical floral motifs in silver gilt thread. The larger of the two motifs is basically round in shape, and looks as if the branches scroll out from a basket; the smaller is much more like a tiny multi-petalled flower.

The orphreys comprise a silk band on to which embroidered motifs have been appliqued. Before application to the chasuble, the embroidery was executed on a linen base, a layer of light-coloured yellow silk having been used between the linen and the embroidery for the hands and faces.The colours used are: green (3 shades), blue (3 shades), flesh (2 shades). The stitches used are long and short stitch, satin stitch and couching. The heavy signs of wear on the front orphrey band leave visible the basis on which the embroidery was constructed (linen ground, silk layer and then embroidery, as well as the linen thread padding used for raised areas of the design). The front orphrey has been shortened to fit the current vestment, evident because the lower part of the saint is missing.

Iconography
Each orphrey bears three female saints who stand within architectural compartments.These compartments are a standard size: 15 inches long x 7 inches wide. The compartments consist of three levels of motifs which throw attention on to the central female figure: a castellated roof over a domed ceiling above the saint's head, 'mid-figure', a background of plain red scattered with embroidered flowers, and on the ground, a tesselated floor. The richness of the materials increases from bottom to top in each compartment. The saints on the back all look in the same direction (towards their right), while those on the front look towards the left. The clothing of the saints follows a formula: each has a halo, wears a gown and mantle and carries the attribute that leads to identification; the halo and mantle are gold, the gown either blue (3 shades) or green (3 shades).The folds of the gown are emphasised by the different shades of the same colour, disposed vertically. On the front orphrey, (from top to bottom) are portrayed St Margaret, St Ursula (?) and three-quarters of a full-length St Barbara; on the back, St Lucy, St Helena (?) and St Catherine of Alexandria (the orphrey has been cut down possibly when the chasuble shape was altered). All but St Helena carry the palm branch that denotes martyrdom, and wear crowns denoting royal birth. St Margaret stands on the dragon (Satan), who swallowed her during her ordeals. St Ursula has an arrow in her hand. St Catherine leans against the wheel on which she was tortured. St Barbara carries the tower in which her father shut her, and St Lucy holds a plate on which her eyes lie.

St Helena (canonised 330), mother of Constantine, carries a patriarchal cross, which may suggest the identification in the original accession register. St Ursula is extremely fashionably dressed for about 1420-40, both in terms of her gown with its high, emphasised waistline, and her 'large' and elaborate hair style (Margaret Scott. Medieval Dress and Fashion. British Museum Press, 2007, pp.135 & 139).

Acquired from the collection of Monsieur M. B. Hochon, auction held at the Galérie Georges Petit in Paris on 11th and 12th June 1903 (Lot 224) along with 8 portions of orphrey bands and another chasuble, all from different parts of Europe, and dating to 14th to 16th centuries. Total cost of purchase, including auction and expert's fees, was £408 6 s 1d. Received into the museum on 27th June 1903. Related in Accession Register to the embroidered triptych in Chartres Cathedral, illustrated in Molinier, Exposition (1900) rétrospective de l'art français, p. 52. These items had been selected in March by A. F. Kendrick and a press notice was sent out of the museum on 20 July 1903. The full text is in handwritten form in the RP. It indicates that the objcts were on exhibition in the Tapestry Court, and that this piece had French embroideries dating from the latter part of the fifteenth century. (RP 13681/1903)

Historical significance: This piece is significant because it is a good example of 15th century embroidery and silk, recut and assembled at a later date. The fact that all the saints are female is also of interest and leads to speculation about the institution for which it was made.

Garment and materials
The chasuble is an example of the richly decorated vestments commissioned for use in the Church. This particular example is typical of the International Gothic style favoured in the late fourteenth and early fifteenth centuries, the silk characterised by the oriental/exotic motif of gold floral devices (consistent with a dating of 1420s or 1430s). Such a silk was suitable for both secular and ecclesiastical use, and might have been made in an Italian or Spanish centre. At that period chasubles were conical in shape, rather than fiddle- or violin-shaped, so this garment must have been altered at a later date (after the beginning of the seventeenth century). The orphreys are both embroidered with purely ecclesiastical iconography, and according to Johnstone, the use of the pillar form on both back and front was most common south of the Alps (Johnstone, p. 141). The dimensions of the compartments of the orphreys may be useful eventually in identifying the geographical location of making (when guild regulations become easily accessible for different cities). Currently, identification can only be speculated upon based on the aesthetics of the images. It is possible that these orphrey bands were originally intended/used for a cope, especially as the figures face in opposite directions and might therefore have faced each other across the central opening. The embroidery was probably executed either in a professional workshop (urban or church) or by nuns.

Iconography of orphreys
It is intriguing that only female saints adorn these orphrey bands, and raises the question of the institution for which they were commissioned. Might such imagery have been more appropriate for a convent than for a parish church, cathedral, abbey or monastery? The saints all came from different localities and their cult began at different periods. It would be worth investigating whether there is some significance attached to their representation here as a group. Rogers and Tinagli note that in fifteenth century Italy male authorities considered devotion to female saints especially appropriate for women, and that women were usually given the names of saints; some families represented these saints in specially commissioned altarpieces. Their namesakes were taken as role models whose virtues could be emulated (e.g Helena and Ursula were seen as pilgrims). Female saints might also be invoked to protect women in certain circumstances (e.g. Margaret in the case of childbirth). Saints who had refused arranged or forced marriages acted as examples for nuns or prospective nuns (e.g. Ursula and Catherine) while Renaissance saints found a precedent for their visionary experience in the story of the Mystic Marriage of St Catherine. (Mary Rogers and Paola Tinagli, Women in Italy, 1350-1650. Ideals and Realities. Manchester University Press, 2005, pp. 56-7. These authors offer a series of primary texts on the subject).

The heavily draped clothing and the covering of her head in the depiction of the saint on the centre back suggests an older woman, and the patriarchal cross surely refers to the legends about the finding of the True Cross. It is therefore reasonable to identify this saint as St. Helena, the mother of the Emperor Constantine, the first Roman emperor to champion the cause of Christianity. A contemporary historian of the Church wrote that Helena, from the time of her conversion led an earnestly Christian life and contributed to the spread of Christianity. Tradition links her name with the building of Christian churches in the cities of the West (at Rome and Trier) and she is known to have erected churches on the holy ground in Palestine (from which sprang her association with the finding of the True Cross). She died at the advanced age of 80, and was soon revered as a saint. The veneration spread, early in the ninth century, even to Western countries. (www.ichrusa.com/saintsalive/constant.htm; www.newadvent.org/cathen/07202b.htm [both accessed 21/06/2007]).

Colour
The combination of red and green surely means that this vestment could have been used for either everyday or for martyrs' days - in line with liturgical conventions of green for everyday and red for martyrs.

A useful outline of the William Durandus' stipulations on vestments in The Divine Offices is to be found in Dyan Elliot. 'Dressing and undressing the clergy'. In Medieval Fabrications. Dress, Textiles, Cloth Work, and Other Cultural Imaginings, ed. E. Jane Burns, Palgrave Macmillan, 2004, pp.55-69.

Reading upwards, St Catherine, St Helen and St. Lucy. Silver-gilt thread and coloured silks in split and satin stitches, with couched work, on yellow silk, applied to red silk. The orphrey was perhaps originally intended for a cope. Like the embroidery, the green silk damask, with I.3 twill brocade, is of Spanish origin.
From the collection of Benoit Hochon.
830-1903 [1950s?]

The silk of the chasuble could have been made in either Italy or Spain, the main European silk-weaving centres of the time; the embroidered orphreys are attributed to Southern France in the original accession register entry (probably because of the shape of the orphrey bands which was popular south of the Alps); the chasuble itself is a reworking of an earlier style, probably made up post 1600.

Attribution note: Vestments were usually commissioned for a specific church or clergyman, though the composite parts were probably made in batches. 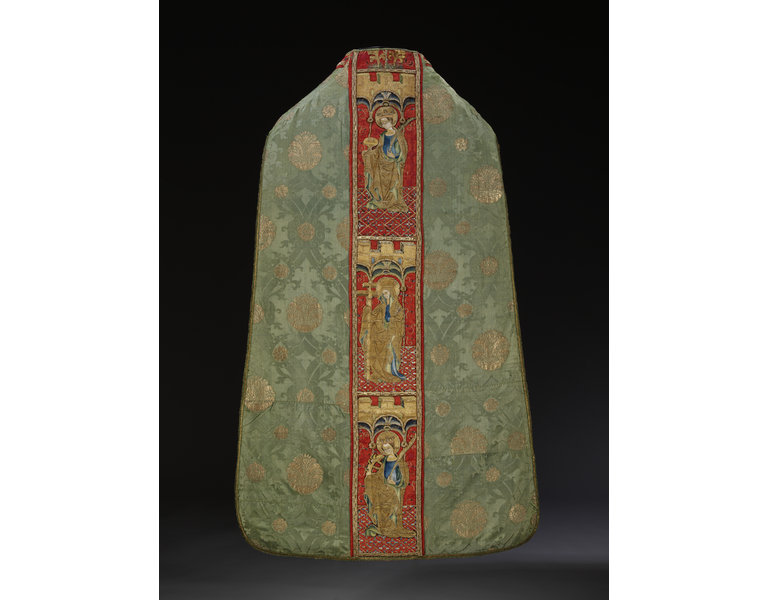