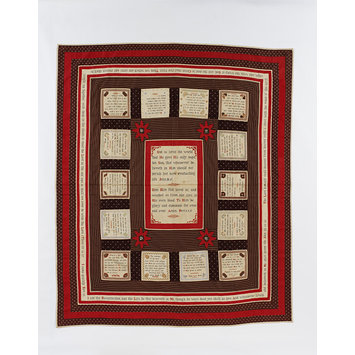 'Scripture quilts' such as this were popular throughout the nineteenth and early twentieth century. Their production was encouraged by organisations and institutions to offer spriitual comfort and guidance during times of duress. Churches, Sunday schools, Bible classes, Temperance groups, ladies' sewing circles, hospital wards and asylums all advocated the benefits of recording Christian scripture while engaged in the act of stitch. The text often ran sideways so that those in neighbouring beds could read the text. Hobbies magazine of 1899 suggested that 'invalids find considerable comfort in such coverlets'.

This example has embroidered panels, but others used ready printed textiles such as those promoted by Robert Mimpriss; an entrepreneur and textile printer born in 1797.

Patchwork quilt made from strips of printed cottons, red cotton and white linen-canvas, with appliqué decoration of flowers cut from printed and red cotton fabric.
In the centre is a large panel of linen-canvas, a further 14 square panels are inset in the third border from the centre and the fifth border is entirely of linen canvas. All these pieces are embroidered with a series of inscriptions worked with red and blue cotton in cross stitch. All the inscriptions are taken from the Bible;
In the centre: John, III.16 and Revelations, I, 5 & 6. In the squares the Biblical texts alternate with short prayers.
The fifth border contains: John, XI, 25, 26, and 1st Epistle of St. Paul to the Thessalonians, IV, 16 & 17.
The embroidery is of a high standard and would appear to be the work of one person.
Although the majority of the printed cotton could date from before 1850 there are one or two pieces of applied, printed cotton which probably date from after 1860.

Embroidered with a series of inscriptions taken from the Bible:

Thin border: I am the Resurrection, and the life; he that believeth in Me, though he were, yet shall he live. And whosoever liveth and believeth in me shall never die. John XI, 25-26

The Lord himself shall descend from heaven with a shout, with the voice of the arch angel, and with the trump of God; and the dead in Christ shall rise first. Then we which are alive and remain shall be caught up together with them in the clouds, to meet the Lord in the air, and so shall we ever be with the Lord. 1 Thess IV. 16-17

‘Scripture coverlets’ such as this were popular throughout the nineteenth and early twentieth centuries. Their production was encouraged by organizations and institutions to offer spiritual comfort and guidance during times of duress. Churches, Sunday schools, Bible classes, Temperance groups, ladies’ sewing circles, hospital wards and asylums all advocated the benefits of recording Christian scripture while engaged in the act of stitch. Hobbies magazine in 1899 suggested that ‘invalids find considerable pleasure in such coverlets . . . The words are sometimes arranged upon the coverlets that the occupants of neighbouring beds can read inscriptions upon the part that hangs over the edge.’ This design principle is evident here. Most examples, such as this one, date from the mid- to late nineteenth century. While some were made for the maker’s own use, others were created as objects to be sold at church fairs and auctions. This example has embroidered panels, but others used ready-printed textiles, such as those promoted by Robert Mimpriss: an entrepreneur and textile printer born in 1797.

Scripture quilts were popular throughout the 19th and early 20th century. They were used in hospital wards and other institutions to offer spiritual comfort and guidance in times of illness and duress. The text often ran sideways so that residents of the neighbouring bed could read the words.

The date given is based on the dates of the textiles. The majority of the cottons could date from as early as the second quarter of the 19th century but the use of small applique sprigs cut from cottons of circa 1870-80 date the cover to the latter part of the nineteenth century. 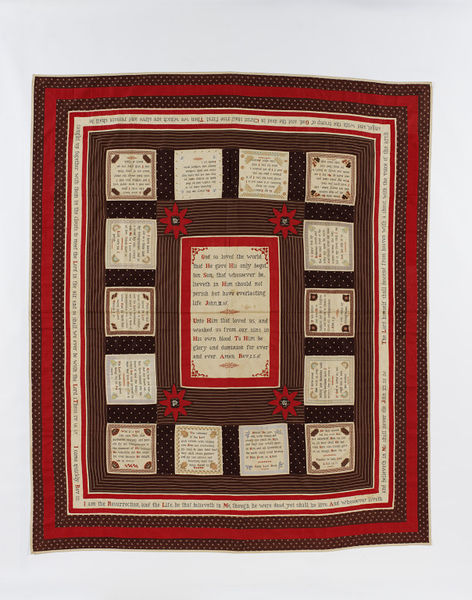