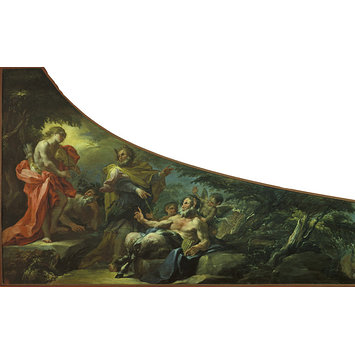 'The Judgement of Midas' (inside of a lid from a clavencembalo)

Domenico Antonio Vaccaro (1678-1745) was born in Naples where he trained in the workshop of his father and then with Francesco Solimena (1657-1747). He is best known for his activity as a sculptor, architect and set designer.

This painting, which decorates the inside lid of a harpsichord, was attributed to the Neapolitan artist Domenico Antonio Vaccaro by Nicola Spinosa (1984). The scene represents the Judgement of Midas who had to choose during a musical context the winner between Pan and Apollo. Midas stands between Apollo wrapped into a red tunic and goat-legged Pan on the right at whom he is pointing. Midas has ass’s ears sprouting from the top of his head.

Wood panel, with modern frame edging. The outside (reverse) apparently painted in a plain ochre red colour, varnish (somewhat deteriorated 2018). At three points along the lower edge traces can be seen where twisted ring hinges held the lid to the body of the instrument.

Painted underside
In a glade peopled with satyrs and putti, Apollo wrapped into a red mantle with a halo of light surrounding his head is playing violin on the left, Midas stands in the middle with ass's ears sprouting from his head while Pan, with his goat legs, sits on the right, holding his pipes.

Historical significance: Formerly attributed to the Venetian school of the 18th century, this painting was attributed to Domenico Antonio Vaccaro by N. Spinosa (1984) who situated its execution during Vaccaro's early career, between 1698 and 1708, when he also produced a series of altarpieces for various Neapolitan churches and others works displaying mythological scenes.
The present subject matter derives from Ovid's Metamorphosis (XI). Apollo and Pan, during a musical context, asked Midas, King of Pessinus, a city of Phrygia, to choose the winner and Midas chose Pan. Furious, Apollo gave Midas ass's ears as a proof of his ignorance. The subject matter, a mythological musical context, echoes the musical function of the piece it is painted on.
Vaccaro represented the god Apollo wrapped into a red tunic, his head surrounded by a halo of light, which alludes to his being also the god of the sun. Pan the satyr is leaning against a rock with putti playing in his back while Midas stands in between pointing at Midas.
The whole picture displays rococo stylistic features, smoothened by the use of a Baroque palette characterised by an intense use of light and shade that creates interesting contrasts. In particular, the cool colouring of the whole is enlivened by the red tunic and the pink hues on the figures' flesh. This manner is reminiscent of the art of Giacomo del Po (1652-1726), whom Vaccaro may have followed after he preliminary trained with Solimena.

During the fifteenth and sixteenth centuries in Italy, artists were often commissioned to create painted wooden furnishings for the domestic interior, especially for the camera (bedchamber) of wealthy private palaces. Such works were generally commissioned to celebrate a new marriage or the birth of a child and could include a lettiera (bed), spalliera or cornicioni (a painted frieze), a cassapanca (bench-chest) and a set of cassone (marriage chests) among other objects and furnishings. The decoration often included subjects associated with fertility, maternity, childbirth, marriage and fidelity and could include references to the patrons through inclusion of their coat of arms and heraldic colours, or of their personal motto or device. This trend extended well into the 17th and the 18th centuries and produced lavish ornamented pieces that rivalled in richness and beauty.

Inside lid, oil on wood, 'The Judgement of Midas', Domenico Antonio Vaccaro, 1700s

Nicola Spinosa, Pittura napoletana del Settecento dal Barocco al Rococo, Vol. I, Naples 1986, p. 198, no. 198 (fig. 232).
C.M. Kauffmann, Catalogue of Foreign Paintings, I. Before 1800, London, Victoria and Albert Museum, 1973, pp.293-294, cat. no. 365A
N. Spinosa, La pittura napoletana del 600, Naples, 1984, fig. 863.
R. Russel, Catalogue of Musical Instruments. Keyboard Instruments, London, Victoria and Albert Museum, 1968.
Peter Thornton, Capolavori lignei in formato ridotto, in Arte Illustrata, Anno V, n.47, gennaio 1972, (pp. 9-12, pp.50-7, pp.108-110, trans. by Elena Lante-Rospigliosi.
Translated from the Italian - "Inside the lid of a spinet preserved in the museum is one of the most beautiful baroque paintings of the museum (fig.9). It was made in Venice at the beginning of the eighteenth century and represents The Judgment of Midas. The musical instrument has disappeared but it must have been particularly beautiful considering the decoration inside the lid." 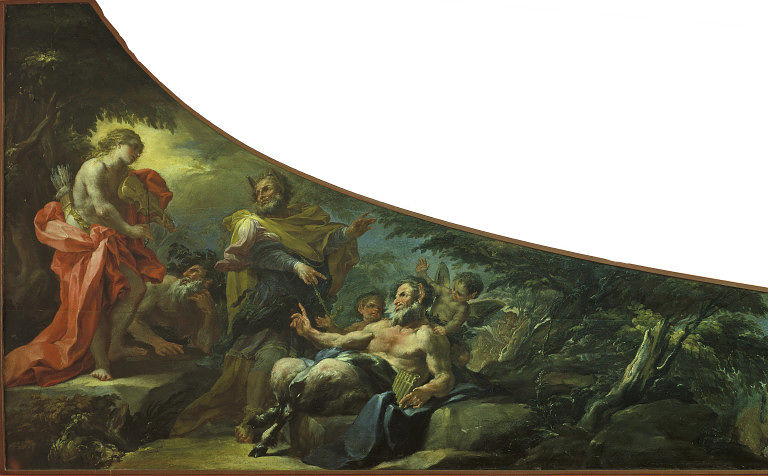