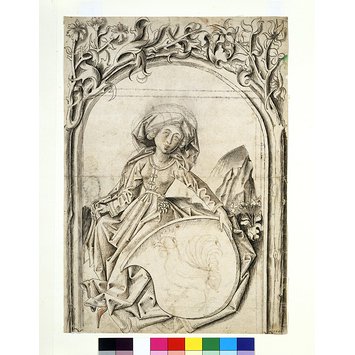 Design for a stained glass panel attributed to an Upper Rhenish (Basel?) Master, made about 1465-1470, showing a woman, dressed in a late 15th century gown, with a headdress over her hair and holding a shield on which is a later ink sketch of a cock. The panel made from this design would most likely have been located in a window of a town hall or in a guild hall, along with other panels depicting the arms of prominent citizens. Stained glass workshops had stock designs, which customers could then personalise with their own coats of arms or devices. In this example, there are various amendments to the drawing. The right-angled lines in black chalk above the woman’s headdress as well as down the right side and the scored lines through the bottom of the design were probably made to show how the design would look for a smaller glass panel. The scored lines are just visible through the bottom and to the right of the shield in the digital image. Additionally, the woman’s headdress has been modified to show an alternative form. The cock added to the shield may represent the arms of the Sinner family of Basle.

Drawing of a woman, dressed in a fifteenth-century gown, with a veil over her braided hair holding a shield in which there is a faint drawing of a cockerel of the family of Sinner of Basle. At either side the border is formed by a tree trunk expanding into an archway of naturalistic plant forms.

Reed pen and ink, brown and red chalk, and wash on laid paper

Bull's head with a wand surmounted by a star and a circle on the forehead where the wand joins the head. H.4cms. Briquet stated that this watermark dates from 1464 to 1471. See References tab.
Muriel Clayton stated that 'the watarmark of a bull's head occurs, with variations in detail, on many of the engravings of the Master E.S. , as well as on the accepted drawings'. See References tab.

'Jean Gan / lt / Jean Ghaß / two forward slashes / jean / jean je ßain'
This may be for the painter and printmaker Jacob de Gheyn II (also known as Jacques de Gheyn II (about 1565, Antwerp - 1629). His father, Jacob de Gheyn I, the glass painter, taught him. The inscription is in pen and ink on the back of the design in a possibly sixteenth or seventeenth-century hand.

It is likely that the first word is 'item' rather than 'Jean'. In Latin this word means 1. Implying comparison, just so, in like manner, after the same manner, likewise, also
2. Introducing something additional, without comparison, likewise, besides, also, further, moreover.

This panel is for a town or guild hall and fits in with the particularly Swiss tradition of commissioning such panels for secular buildings. It shows the donor's heraldic 'achievement', a complete heraldic composition with a a coat of arms in the centre.

Stained glass workshops had stock designs, which customers could then personalise in their own requirements. Is this example, there are various amendments to the drawing. The woman's headdress has been modified into the more stylish form of bulbous headgear favoured in the early 16th century. A cockerel, possibly that of the Sinner family of Basel, has been added to the shield. []

Attribution note: According to one German treatise on the art of painting on glass, it was usual practice to place the glass directly onto a tracing of the design on transparent paper. No mention was made of the glass being placed directly onto the design itself. See References tab. These impressions of the frames correspond to the design being used again at a later date when the outline, drawn in black chalk, of an early sixteenth-century headdress of the type seen in Durer's woodcut of 'Christ Taking Leave of His Mother', about 1504-05, (Bartsch 92) was made. In contrast, the earlier frame is formed by the arch and thus the lead lines must have been in different places. This evidence suggests that the design was modified probably in the early sixteenth century.

The elaborate technique of reed pen and ink, red chalk, and wash on the cartoon guided the fifteenth-century glass painter who would have used a technique that the writer of the above treatise termed peinture par enlevage or painting by taking off. The outline was drawn in an oil colour and painting over the whole with watercolour, which after it was dry was removed with a hard paint brush. Portions of different degrees of thickness were removed to form shadows, half-tints, or lights as necessary. Wherever the glass was left bare by the complete removal of colour produced the highlights.

Individual pieces of glass are painted with vitreous paints and then fired in a kiln at around 650C so the paint fuses to the glass surface, becoming permanent, before being leaded into a panel. 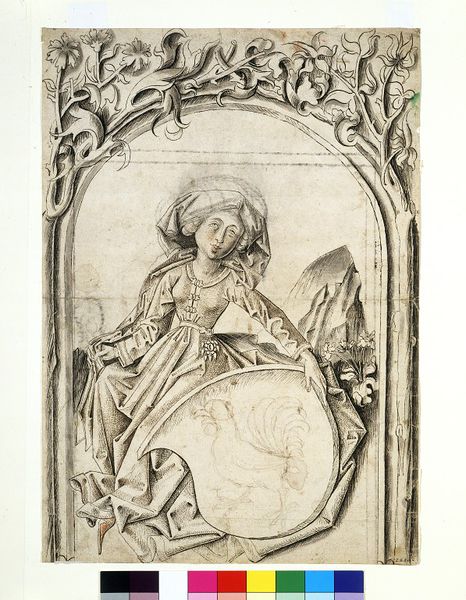