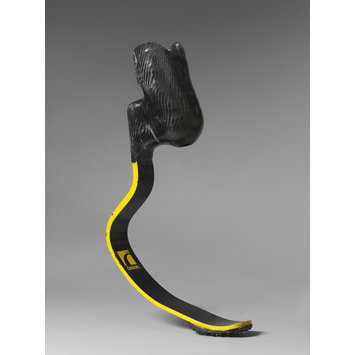 The Paralympian, Jonnie Peacock, who took gold at the 2012 Summer Paralympics owned and used this running blade. The blade is fitted with a knee socket and spike pad and is designed for leg amputee athletes to enhance their performance in short distance sprints.

The blades are made from a carbon-fibre-reinforced polymer which makes the blades strong and light. More specifically, reinforced sheets of epoxy material are cut into square sheets and pressed onto a form to produce the final shape. The final product is highly flexible, which is important for the runner, as it allows the blade to store energy, giving the runner a stronger push off. Running performance is also aided by a long flat toe, and an angled positioning of the blade, which puts the runner in a forward-leaning position.

Össur are the current manufacturers of the Cheetah series of prosthetics. The original Flex-Foot Cheetah, however, was designed and released by the inventor Van Phillips in 1984. Phillips was an amputee himself, having lost a leg below the knee in a waterskiing accident at the age of 21. After the accident, Phillips was inspired to enroll in a programme for prosthetic design at Northwestern University. In 1981, he went on to work at the Center for Biomedical Design at the University of Utah in Salt Lake City and in 1983 he co-founded Flex-Foot as a company with Dale Abildskov, Bob Barisford and Walt Jones. Phillips created hundreds of prototypes for the Flex-Foot, many of which broke, before coming up with the final design. Philips took his inspiration from the C-shape of a cheetah’s hind legs which is where the design gets its name.

In 2000, he sold Flex-Foot Cheetah to Össur, an Icelandic company that develops, manufactures, and sells non-invasive orthopaedic equipment. Phillips’ original Flex-Foot blade design, with some variation, is now used by approximately 90 percent of Paralympian runners, and by others who can now enjoy more active lives as a result of his work.

The Cheetah Xtreme was acquired as part of the Shekou Project, an international partnership between the V&A and China Merchant Shekou Holdings (CMSK) to open a new cultural platform called Design Society in Shekou. The running blade was included in the inaugural exhibition, ‘Values of Design’, in the V&A Gallery at Design Society in a section which looks at how design can address disabilities. This is one of the first examples of an object used in the Paralympics in the V&A’s collection.

A running blade made from carbon-fibre reinforced polymer in black with yellow strips on the sides and the Ossur logo in the centre of the blade. The blade has a studded flat foot and curves backwards in the centre to form a C-shape. It is fitted with a knee socket at the top.

This prosthetic leg was included in ‘Values of Design’ at the V&A Gallery, Design Society in Shenzhen, China in 2017.

This prothestic leg was modified and worn by double Paralympic Champion, Jonnie Peacock. The blade has been modified with an added knee socket to fit Jonnie Peacock's requirements.

In 1984, medical engineer Van Phillips developed a carbon-fibre prosthetic called the Flex-Foot. By 1996, an adapted version called the Cheetah became the preferred prosthetic for Paralympians. Its lightweight springiness has enabled athletes to break new records in multiple track events, and could perhaps even outpace fully-abled athletes in the future. [] 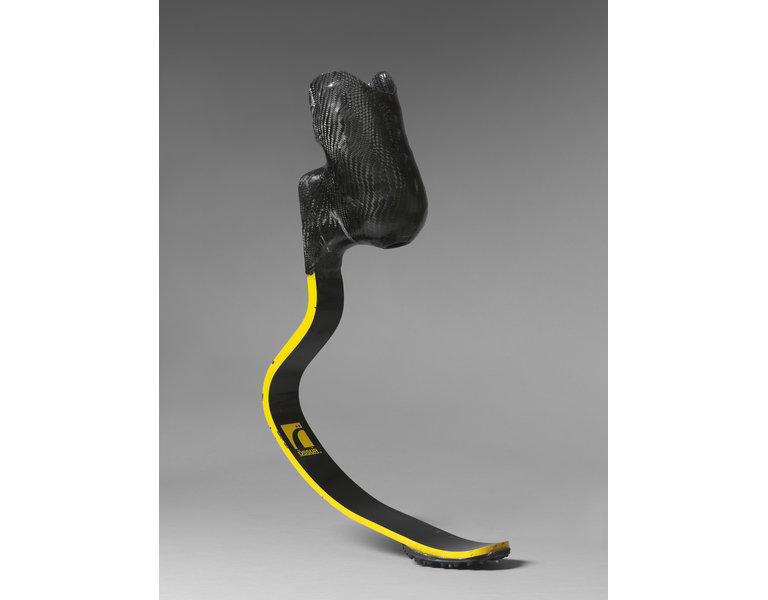