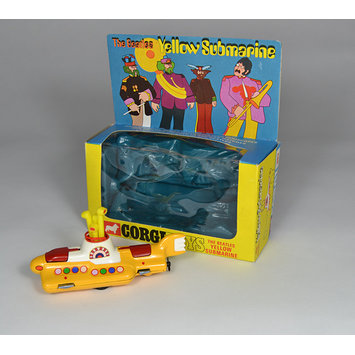 The Beatles' film Yellow Submarine (1968) has been credited with helping to pioneer animation as a serious, creative art form. Its dark, psychadelic visuals and surreal mood, combined with the Beatles' highly-recognisable songs, made it an instantly-memorable classic. Loosely-based on Paul McCartney's 1965 composition of the same name, a song originally written for children, the plot follows the Beatles as they accompany a sea captain named Fred to Pepperland, where they must save its inhabitants from the music-hating Blue Meanies. The majority of the film takes place inside the eponymous Yellow Submarine, a toy of which was produced by Corgi (in several versions - this being the second) from 1969. Operating the push-buttons on the submarine's port side opens the hatches, revealing the four Beatles as they appear in the film.

A toy submarine of die-cast metal, painted yellow and white, with colourful plastic decals. Four yellow plastic periscopes emerge from the centre of the conning tower, they rotate as the toy is pushed along. The periscopes are surrounded by a red plastic railing. A spring-loaded red metal hatch is located fore and aft of the conning tower. These are actived by two metal push-buttons located directly below them, on the port side, on the join where the upper and lower halves of the submarine meet. When pushed, painted plastic figures of the Beatles spring up: Paul McCartney and John Lennon are paired together at the stern, Ringo Starr and George Harrison at the bow. The submarine can be propelled along on four plastic wheels located on the underside. At the stern, beneath the rudder, is a small, black plastic propellor which can be turned.

The box is made from card, printed predominantly in yellow and blue, with an image at the top of the Beatles dressed as Sgt. Pepper's Lonely Hearts Club Band, as they appear at the climax of the film. There is a transparent front window and a the internal liner is blue polystyrene. On the reverse is a printed image of an artist's impression of the toy, surrounded by Blue Meanies. Ont he base are printed operating instructions.

'CORGI TOYS / THE BEATLES / YELLOW SUBMARINE / MADE IN GT. BRITAIN'
Moulded on base of submarine

The Beatles were among the first musicians to be successfully marketed as movie stars, playing exaggerated versions of themselves, beginning with the British classic A Hard Day’s Night (1964). The group would go on to pioneer the music video, a format which can trace its beginnings to the musical sequences in their 1965 film Help!.Their animated feature, Yellow Submarine, was named after one of their most recognisable songs, a simple Paul McCartney composition originally written for children. Sung by the band’s drummer, Ringo Starr, its refrain ‘we all live in a yellow submarine’ is known around the world. In the film, the Beatles are fetched from Liverpool by a sea captain named Fred, in a Yellow Submarine, and brought to faraway place called Pepperland, where they rescue its inhabitants from the music-hating Blue Meanies. The film met with wide acclaim on its release in 1968. Its darkly surreal visuals incorporated contemporary 1960s psychedelic imagery. The film has been credited with helping animation be seen a serious art form. The Beatles themselves were so impressed with the finished film that they agreed to appear in it personally in a short sequence at the end, having initially refused to do so following dissatisfaction with the production of Help!

The Beatles, four working class young men from Liverpool, had a profound effect on young people in the early 1960s. They arrived at a time of great social change, becoming worldwide celebrities, synonymous with metropolitan cool, Britishness and fashion. They were the first musicians to have their image comprehensively merchandised globally, appearing on a staggering range of products. Combined with brilliant songwriting and groundbreaking experimentation in the studio, the Beatles may rightly be regarded as a major creative force in the 20th century.

Corgi toys were manufactured in Swansea, Wales, as a branch of Mettoy Playcraft. The line was introduced in 1956, and was sold around the world. Corgi produced an enormous range of metal toys, based on real and fictional vehicles, taking advantage of several film and television licences. Corgi’s most famous product may have been the toy of James Bond’s Aston Martin DB5, from the 1960s films starring Sean Connery. The company entered receivership in 1983, the Corgi brand has since changed hands several times, being at present (2016) with Hornby.

The red dorsal hatches indicate that this toy dates from 1970-1971. The original run had a white hatch on the bowside and a yellow one at the stern. These were probably changed to red (and a red band below the conning tower removed) to reduce the number of processes required to manufacture the toy, thus making it cheaper to produce. 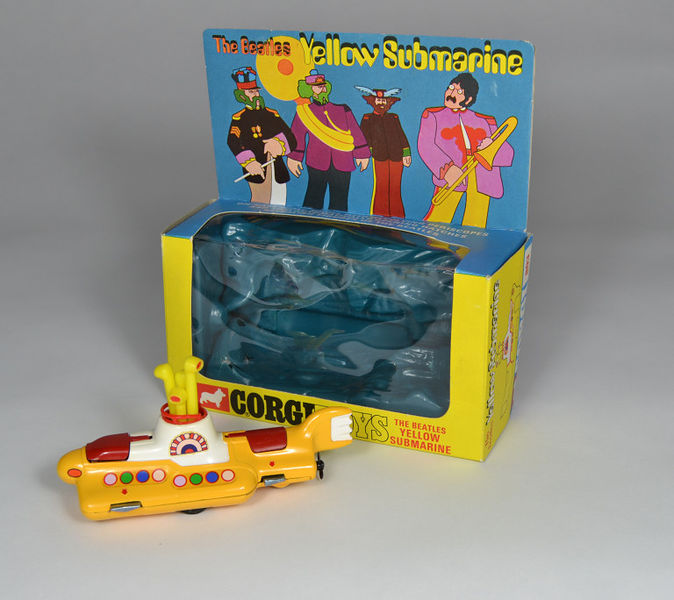