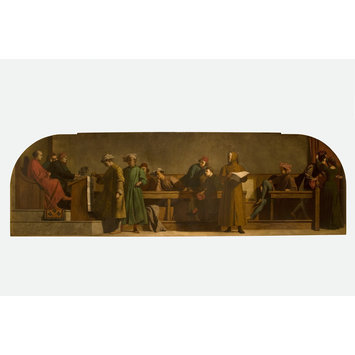 The Distribution of Art Prizes

The Distribution of Art Prizes was commissioned in 1869 for the left-hand overdoor space at the south end of the National Competition Gallery (now rooms 100 and 101), as a pendant to Val Prinsep's painting of the same name, commissioned for the right-hand space (PDP.LOST.7). Both paintings were removed shortly before the outbreak of the Second World War and placed in store.

Historical significance: The National Competition Gallery (now rooms 100 and 101) in the East Ranges of the Museum was completed in 1864-65. At that time it was formed of two parallel top-lit rooms; these were used for the marking and display of work by art students in Department of Science and Art-run schools across the country. In 1865 Richard Redgrave, who was placed in charge of the decoration of the gallery, proposed to commission paintings for the eighteen lunettes along the upper section of the wall. The project, managed jointly by Redgrave and Henry Cole, continued for over ten years; several lunettes were in position by 1869, although work was not completed fully until 1876.

In 1868 artists were chosen (or proposed themselves) for the project. Initial plans to commission artists of the stature of Leighton, Watts and Poynter were scaled down, and the core of those chosen were historical genre painters from the loose association of artists known as the St John’s Wood Clique: G.D. Leslie, Henry Stacy Marks, William Frederick Yeames and D.W. Wynfield. Cole held a meeting to establish a theme for the lunettes, and, highly appropriately for a gallery in which students’ work was displayed and judged, it was decided that the paintings should represent the practices of drawing, painting and sculpture. The resulting subjects treated by the ten compositional canvases in the group included life drawing, modelling from the life, study of anatomy, landscape painting, flower painting and still life drawing. These varied subjects reflected the reformed curriculum for art schools which Redgrave, in his capacity as inspector-general for art in the Government School of Design, had devised and implemented in the previous decade.

The various artistic activities represented in the paintings are set within relevant historical contexts; each takes place within the period and place considered to have fostered its inception or its apogee. So drawing the skeletal structure of the body is set in Renaissance Florence; still-life drawing is given a 17th-century Dutch setting; and landscape sketching takes place in 19th-century England.

In 1869 the gallery was extended southwards, prompting the commission of two large elongated painted canvases for the overdoor spaces at this end of the room, each measuring a metre and a half high and over five metres wide. Val Prinsep offered to decorate one of these and F.R. Pickersgill was commissioned to submit a painting for the other.

A specialist in historical genre painting, Frederick Richard Pickersgill (1820-1900) entered the Royal Academy Schools in 1839. He exhibited 50 works at the RA between 1839 and 1875. His subjects were mythological, biblical and literary. He won prizes in the Westminster Hall competitions 1843 and 1847. He was elected ARA in 1847 (at a young age), becoming a full Academician in 1850, and Keeper in 1873.

Both Prinsep and Pickersgill chose to show young artists receiving prizes, continuing the theme of art education expressed by the lunettes. Historical settings are employed: Prinsep and Pickersgill's depictions, respectively, of Renaissance Venice and Florence referred to the centuries-old debate over the relative merits of disegno(drawing), which was associated with Florence and colore(colour), which was associated with Venice, and exemplify Vasari's argument that competition was essential to the flowering of art.

John Physick, The Victoria and Albert Museum: the History of its Building, London 1982, pp. 85-87.
Jim Dimond, Susan Owens and Sophie Reddington, 'The conservation of twenty paintings for the V&A's National Competition Gallery', The Picture Restorer, no. 38, Spring 2011, pp. 14-16. 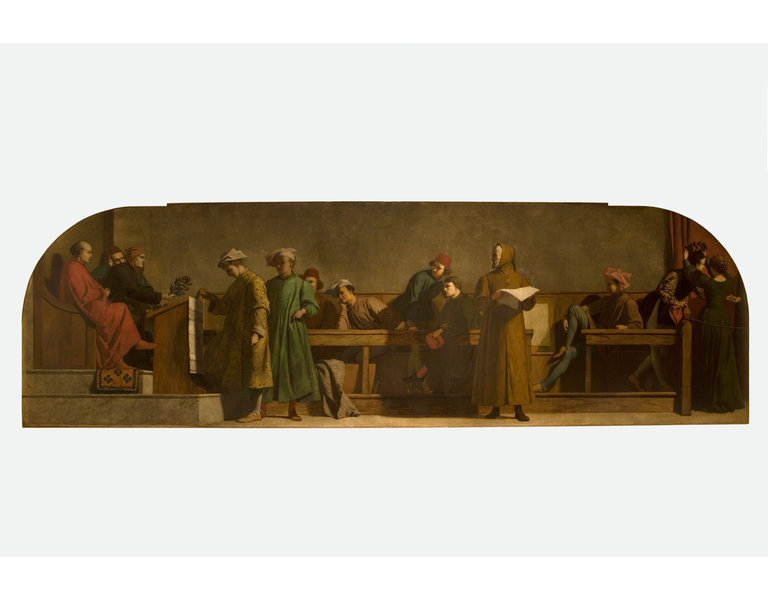