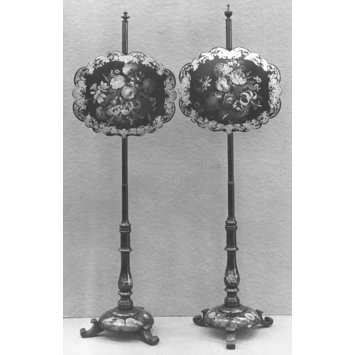 Papier-mâché, literally 'chewed paper', is an ancient technique thought to have been invented by the Chinese. It became popular in Britain during the 18th century when the term was first coined in English (whereas in French the term was not recognized until the 20th century). At first it was used in architectural mouldings and frames but as the technology improved it became a popular material for all sorts of decorative objects ranging from household furnishings to carriages. Not prone to warping like wood or metal it was ideally suited to japanned decoration. This in turn provided an ideal smooth surface for painted decoration.

This pair of pole screens was made by the celebrated firm of Jennens & Bettridge (1816-1864) at a time when the fashion for papier-mâché japanned ware was at its height. The backs of these screens are stamped with the company’s name as well as the painted initials SR. These are probably the initials of the person who painted the floral and scrolling decoration on the screens. We do not know whether SR was employed by Jennens and Bettridge or if the work had been subcontracted out to an external workshop. However, we do know that the firm took pride in producing items of the highest quality, and at the pinnacle of their success they employed over sixty decorators.

Stand and pole of wood, japanned black. Three short scroll legs with gilt foliate ornament support a circular base of flattened hemisphere form, decorated with flowers and foliage painted in polychrome. Series of stepped mouldings (ogee and beading) at the base of the pole and at intervals in three further places further up the pole, the top of the pole surmounted by a turned urn-shaped finial. The screen is supported on the pole by two brass rings attached to a flat brass plate screwed into the back of the screen; the plate stamped J & B with a *. The lower ring is considerably wider than the upper and has a screw and spring mechanism which allows the height of the screen to be adjusted; the upper ring serves merely to hold the screen in a vertical position. The screen is oval with scalloped edges, and is decorated with a border of gilt rocaille and flowers picked out with touches of yellow, red and whitish paint. This border encloses a naturalistic bunch of flowers painted in bright colours. The back of the screen is stamped 'Jennens & Bettridge' and is also signed with the initials 'SR' at the top in white.

'Jennens & Bettridge' stamped on the back of the screen

'SR' painted in white on the back of the screen at the top. 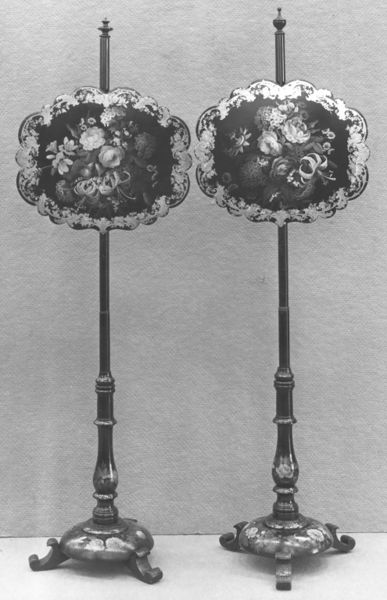