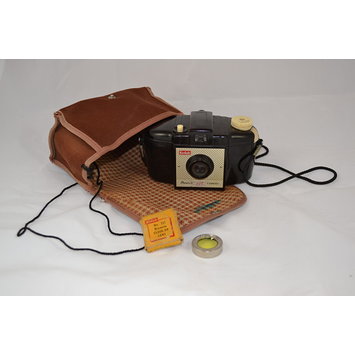 This object was given to the donor in the early 1970s by her aunt, whose camera it had originally been. She recalled having shared it with her sister on family holidays, where they would carefully select the four shots each which were allowed by the single roll of film they were permitted to use.

The Eastman Kodak Company was founded by George Eastman (1854-1932) in 1888 in Rochester, New York State. Eastman had patented the first successful photographic film in 1884, a few years before that he had perfected a process for mass-producing ready-to-use ‘dry’ photographic plates, supplying them to photographers and making his first fortune. He began to sell his Kodak cameras form June 1888, the invented name was chosen because of Eastman’s fondness for the letter ‘K’, and because it ‘displayed a vigorous and distinctive personality’. Eastman’s great dream was that photography should be a pastime open to everyone, his compact Kodak cameras were far more affordable than complex, heavy equipment which had previously been available only to a very rich few. The original Kodak cost Eastman’s company only $6.35 to make, and retailed for $25. The real secret to Kodak’s success was that they sold inexpensive cameras, making large profits from also selling all the consumables a photographer would need: film, chemicals etc. So popular and ubiquitous was the Kodak brand that the advertising phrase ‘Kodak moment’ entered common parlance to describe a personal moment in need of recording.

Kodak made the first in their line of simple, cheap ‘Brownie’ cameras in 1900: a simple cardboard camera costing only $1. The name ‘Brownie’ was derived from a popular series of publications about fictional, pixie-like, mischievous characters, created by Palmer Cox. Many soldiers in the First World War took ‘Brownies’ with them to the trenches of France and Belgium, creating a vital, informal document of life under fire. ‘Brownies’ were extensively marketed to children. The notion was that a ‘Brownie’ would be a child’s first camera; that they would grow to love photography, which would ultimately lead them to buy more advanced, more expensive types.

The ‘Brownie 127’, first made from 1952, and available in slightly redesigned forms until 1967, was an extremely popular camera: over a million of them had been made by 1954. It used Kodak 127 film, a product originally intended for Kodak’s small ‘vest pocket’ cameras. The film was available in eight and twelve-shot rolls. The ‘Brownie 127’ was manufactured by Kodak Ltd., the British branch of the Eastman Kodak Company incorporated in 1889. This model of camera was exported to the United States and Canda, where they were known as ‘Brownie Starlets’.

This camera is the second version of the Kodak 'Brownie 127', and therefore would have been made between 1956 and 1959. It can be differentiated from the first version (made 1952-1955) by the crosshatched pattern on the metal plate on the camera's front. 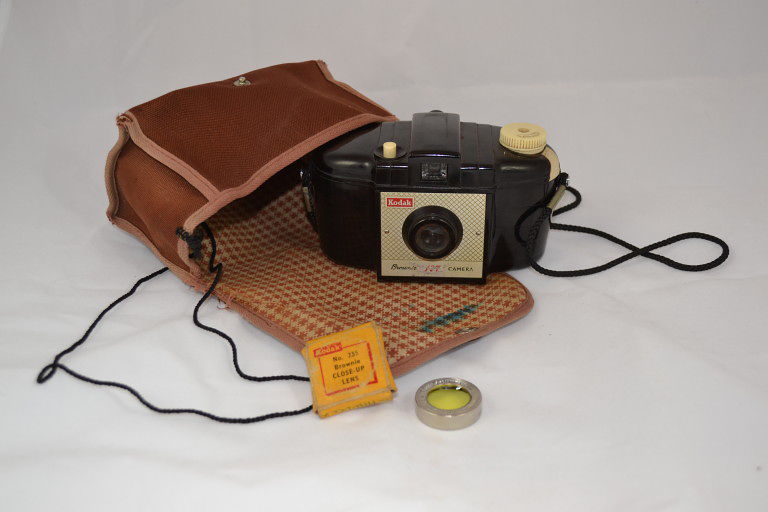