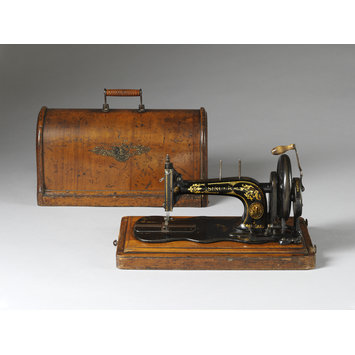 The original sewing machines produced by the Singer Manufacturing Company were intended for industrial use and were large and very heavy. They were designed to be set upon the packing cases in which they were transported. These cases contained the treadle and each had a poster advertising the machine pasted to the outside. Sewing machines revolutionised the clothing industry as previously all sewing was done by hand. As well as making it possible to mass produce clothing more cheaply, it also made work easier for women who had previously made and repaired all clothes by hand.

In 1856 Singer introduced the ‘Turtle Back’ - their first sewing machine for domestic use. This machine was a lot smaller and lighter than the industrial machines and was set upon a decorative cast iron treadle table. The ‘New Family’ sewing Machine (later known as the model 12/12K) was first introduced to the market in 1865 and was produced by the company into the early twentieth century. The machine was incredibly successful selling more than four million machines worldwide by 1882. The introduction of the hire purchase scheme by Clark in 1856 meant that it was not only the wealthy who could afford to buy a Singer sewing machine, as the scheme made it possible to spread the cost over several instalments.

In the late 1850s, after the introduction of their sewing machines for home use, the Singer company began to sell furniture for their machines. In order to reduce costs and simplify production the company began experimenting with built-up (plywood) veneer furniture and began to develop their own specialist equipment to mass produce it. The covers of their portable cases were made (mainly) of moulded 3-ply plywood and were possibly the most long-lived of all plywood designs until the twenty-first century (they were manufactured from 1884 to about 1950).

Cast iron, hand operated, sewing machine on solid gum base. The sewing machine is painted black and is decorated in gold with an acanthus leaf pattern and the name of the company. Embossed and painted gold with the company logo showing the Singer boat shuttle with crossed needles and thread forming and 'S'. The gold decoration is waring away to reveal the black paint beneath. Hinges to back of machine attaching it to base. Machine can be lifted on the hinges to reveal the mechanism underneath.

The machine has a removable cover with a rounded top of moulded 3-ply nyssa faced plywood and veneered solid wood base and ends, with a metal a solid wood handle. There is a compartment inside the cover probably for storing spare needles and thread. The Singer company logo showing the boat shuttle and crossed needles is transferred on the front of the cover in black and gold. The paint has worn off in places to reveal the wood beneath.

Isaac Merrit Singer (1811-75) filed the patent for his first sewing machine in 1851. It was not the first sewing machine to be invented, but was an improvement on earlier machines as it combined a vertical needle with a horizontal sewing surface. He began manufacturing the machines immediately – the first being made by Orson C. Phelps (1813-99) who owned a machine shop in Boston. Later in 1851 Isaac Singer, along with New York lawyer Edward Clark (1811-82), established I. M. Singer & Co. (later the Singer Manufacturing Company).

The Singer Manufacturing Company was
almost certainly the world’s largest plywood
furniture producer from the 1880s to
the 1950s. They used plywood in tables,
cabinets and sewing machine covers such
as this. Singer used plywood to reduce costs
and simplify production. They manufactured
it in their factories from raw materials,
including (from at least the 1910s) logging
trees and cutting veneers.

Singer's portable cases were made (mainly) of 3-ply plywood. The base of the case consisted of a piece of solid wood to which the machine was fixed with hinges. The handled cover was made of a curved central piece of moulded plywood that was fitted into solid side and base pieces. The original intent was for the outer veneer to be walnut, but cheaper gumwood or nyssa was chosen instead as part of Singer’s drive for minimum production costs. 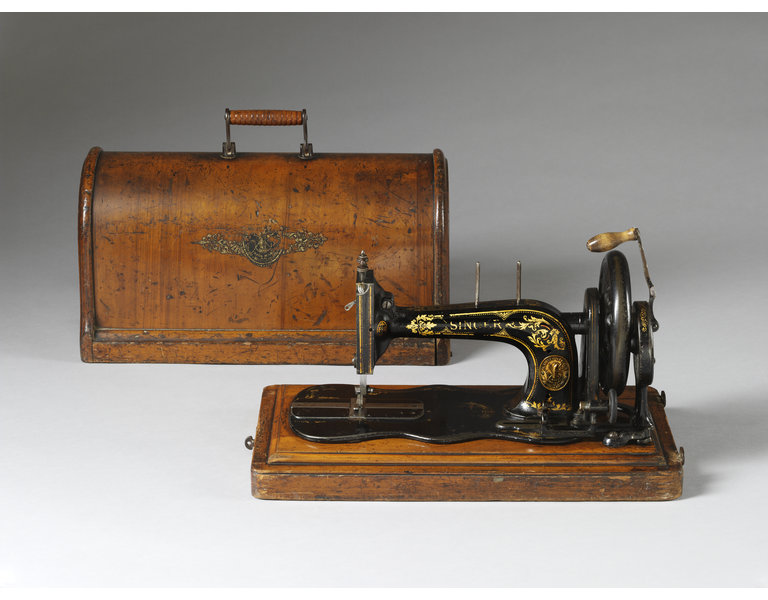