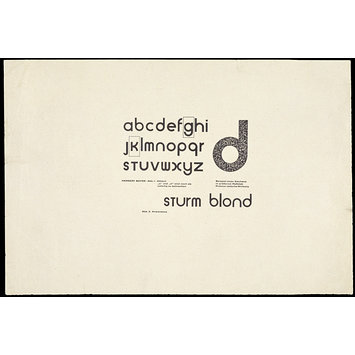 Notes:
Proof sheet for the Universal alphabet typeface, designed by Bayer. A single lower-case typeface based on geometry, it was subsequently used for many Bauhaus publications.
Library's copy exhibited: "Signs of art and commerce : graphic design in the German language 1900-1950", held Victoria and Albert Museum, 5 Mar.-18 May 1997 (Henry Cole Wing 3).
38041800794604 Exhibited in NAL touring exhibition 'Inspiration by Design: Word and Image from the National Art Library at the V&A', State Library of Victoria, Melbourne, 20 March 2015-14 June 2015 and State Library of New South Wales, Sydney, 8 July 2015-27 Sept. 2015.

In 1936 the National Art Library decided to lay the foundations of a "collection of commercial typography and to exhibit contemporary specimens from time to time so that the trend of typographic design, both in this country and abroad, could be appraised by students of industrial art". The Keeper of the Library, Philip James was largely instrumental in acquiring the material. The bulk of the collection consists of examples from the 1930s, especially 1936 - 1939, with a smattering of items from the 1940s.
The collection is further supplemented with material from the 1960s which the Library inherited from the Circulation Department of the Museum after its closure in 1978. As these two groups of material stand as historic collections in their own right, any further examples acquired by the Library have been catalogued individually and not added to this designated 'closed collection'.
Currently uncatalogued. A typescript list is available on request at the Main Counter; this list does not include the material inherited from the Circulation Department.

Proof sheet for the Universal alphabet typeface, designed by Bayer. A single lower-case typeface based on geometry, it was subsequently used for many Bauhaus publications.

universal alphabet Typeface proof sheet
Dessau, about 1926
In his role as Head of the Printing and Advertising Department at the Bauhaus, Herbert Bayer designed a sans serif lowercase-only typeface that embodied the Bauhaus aesthetic, which aimed to unite art with the principles of functional design. He achieved legibility by reducing the alphabet to its essential geometric lines and curves.
Letterpress
Designed by Herbert Bayer (1900–85)
Museum no. 38041800727901 [2018]
Promoting Commercial Art: The Initiative of 1936

After the economic crash of 1929–30, commercial graphics were considered a major tool in efforts to stimulate consumption and revive the world economy.

In 1936, the Library devised a project to extend its considerable collection of commercial graphics. It solicited samples of work from significant designers throughout Europe and America to create an ‘open reference collection [representing] the trend of typographic design, both in [Britain] and abroad’ for the benefit of students. The idea that graphic art was essential both in business and in shaping consumer taste recalls some of the founding principles of the Museum.

A small exhibition, Modern Commercial Typography, publicised the collection. Current but traditional work was displayed next to material that showed the influence of progressive developments in architecture and photography. Simplicity was valued over ornamental detail and typography given a dramatic role. Included in the exhibition were examples of new techniques such as airbrushing and photomontage.

In 1925 the Bauhaus founder, Walter Gropius asked Bayer, who was Head of the Printing and Advertising Department, to design a new typeface for all the school’s printing. Bayer reduced the alphabet to its essential lines and curves, resulting in a more legible text and a cleaner look. [It was never taken beyond the design stage. This line was included in the original label, but the assertion is not entirely correct: the masthead of die neue linie used a form of the typeface] 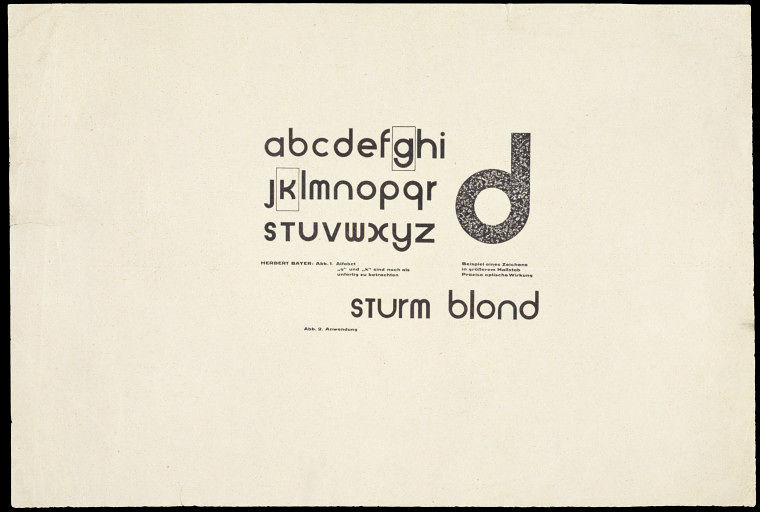