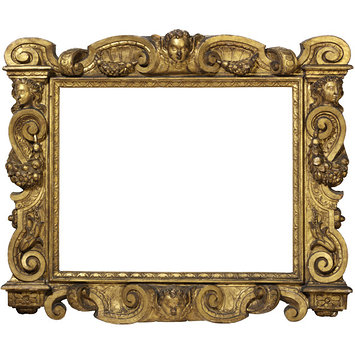 Separate wooden picture frames were used in Italy from about the 15th century, although they developed from earlier frames in both metal and wood on altarpieces. They were used to protect and enhance both secular and religious paintings.

As well as many picture frames acquired with paintings, the V&A acquired some frames - principally Italian renaissance in origin or style - as independent objects. They were usually chosen for the fine quality of their carving and decorative effects. Many of the ornaments used are classical and architectural in origin.

This type of picture frame, richly carved with scrolls, masks and swags of fruit, is known as a Sansovino frame after the Italian sculptor and architect Jacobo Sansovino (1486-1570), whose Venetians buildings were particularly influential on the decorative arts from about 1530. On this frame the gilding has been renewed, as was often done, to 'refresh' the effect, with thin layers of white gesso, coloured bole and gold leaf applied over the original finish.

Structure
The original frame is constructed of a softwood back frame to which a lime carved front frame is applied.

The top and bottom of the front frame run the full width, with the side members butt joined between. The sides are placed below the moulding at the top, carved with lunettes filled with half flowers, and above the pedestals at the bottom.

At the top centre wood has been added for the protruding, carved cherub head.
The cherub head swags and the female heads on the sides are carved in high relief and the female figures have long noses, pointed chins and long wavy hair.
Iron nail heads which can be seen on the back frame are used to hold these to the front parts of the frame. On the top left a large hole has been drilled.
The sight mouldings are made of separate mitred and applied pieces of wood.
There are some losses of carving and wood boring beetle larvae damage, particularly at bottom back.

Later Additions or alterations
There is later addition softwood build up, probably 19th century. The horizontal members of this build up are butted between the vertical members. The outside edges have been chamfered. Nails have been driven through to hold these pieces to the original frame. On the left, an additional piece of wood has been screwed on. Gummed paper has been applied over the build up and the original sight edge moulding, probably to hold a later addition back board. This build up is not included in the profile drawings.

A later addition, painted pine, tongue and groove board had been inserted into the rebate. This was removed for photography.

Description of Ornament
A cavetto moulding enriched with lunettes filled with half flowers borders the sight edge. The sides are each carved with a female head with flowing hair supported by strong elongated scrolls in the manner of terminal figures. Heavy festoons hang from the top volute and a flowering pod springs from the lower volute. Pedestals, enriched with a condensed flower and decorated at the bottom with floral corbels, support each side. The top and bottom are carved with a winged cherub head at the centre and scrolls with radially arranged tongues and strap-work clasps enriched with overlapping coins. Small festoons are hung from the scrolls at the top.

Hanging Device
At the top centre of the original frame there are old fixing holes and an indentation, probably from an old wrought iron cross-over hanging loop. At the top left and right there are two later addition iron rings attached with large screws. On the later addition build up, there are later metal hanging straps which are screwed on and have holes for a wall fixing. On the right, these extend at the top and bottom of the frame and on the left they extend at the side.

Bought, with two paintings in tempera from an altarpiece by Vittore Crivelli (V&A 765A-1865 St Catharine and V&A 765:1-1865 St Jerome), from the Managers of the Guarantee Fund for purchasing the Collection of Monsieur Soulages of Toulouse for £70.

Conclusion and Observations (taken from Powell and Allen, 2010).
This frame probably contained a secular painting. It was acquired with paintings St Catharine and St Jerome from an earlier 15th century altarpiece by Vittore Crivelli, (765A-1865, 765:1-1865). (In the Soulages Collection the paintings were attributed to Carlo Crivelli. The paintings are to be displayed in the V&A Mediaeval and Renaissance Galleries, without frames, as fragments from an altar piece).

The addition of a later gilded scheme has obscured the original sculptural detail which would have appeared sharper. The later scheme generally seems to follow the earlier scheme and so gives an impression of how the frame would have appeared, although the earlier gilding would probably have been burnished and more reflective. No evidence of earlier paint was found on the flesh areas of the figures or the carved relief having a different coloured background which can be seen on other Sansovino frames. (See for example the Sansovino frame at the National Gallery, London, north Italian, probably Venetian, c1590, with pink painted mask with green and metal spangled recessed background. See Penny, N. Frames. (National Gallery Pocket Guides.) London: National Gallery, 1997. pp. 60-61).

Venetian Sansovino frame, second half of 16th century, 245 335 70, although a narrower frame it has similar character of volutes and placements of flowers and of top and side festoons, use of female and winged cherub heads, although of different character, and bottom clasps. (Verona, Museo di Castelvecchio). See Sabatelli, F. La Cornice Italiana dal Rinascimento al Neoclassico. Milano: Electa, 1992. pp. 156-157.

The V&A carved and gilded lantern (Museum No.7225-1860) has mouldings and female heads which are very similar in character. See Introduction to Sansovino Frames.

Comparable frames
Ferenc Batári, and Erzsébet Vadászi ; edited by Elvira Király : Art of furniture-making from the Gothic to the Biedermeier: European Furniture from the 15th to the 19th Century in the Nagytétény
Castle Museum ([Budapest : Museum of Applied Arts], 2002.), no. 17, p. 27

Christine Powell and Zoë Allen, Italian Renaissance Frames at the V & A
- A Technical Study. (Elsevier Ltd. in association with the Victoria &
Albert Museum, London, 2010), no. 24. 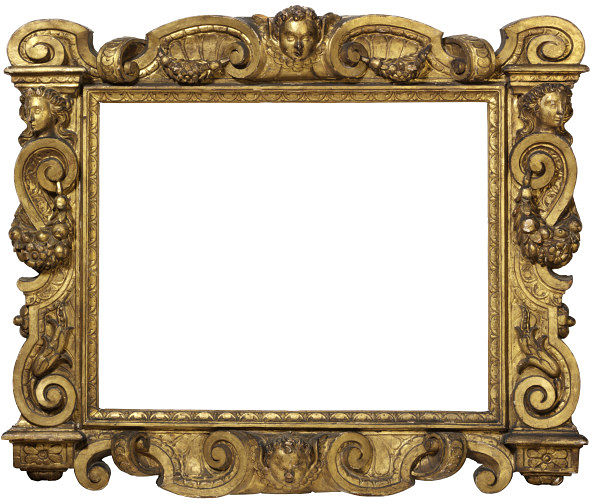