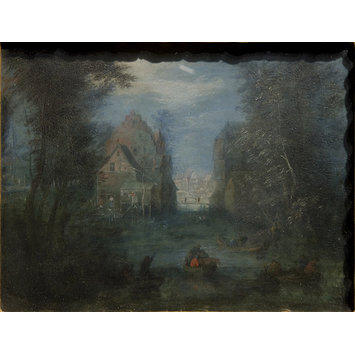 Landscape with Boats on the Water

Jan Bruegel the Elder (1568-1625) was the second son of Pieter Bruegel the Elder (ca. 1525-1569) and received his training from his maternal grandmother, Mayken Verhulst, and Pieter Goetkindt (died 1583) because of the early death of his father. In the 1590s, he travelled to Italy where he met his lifetime patron, Cardinal Federico Borromeo (1568-1631), archbishop of Milan and returned to Antwerp shortly before 1597, where he became a member of the Guild of St Luke. In 1606, Jan Bruegel the Elder became court painter to Archduke Albert and Archduchess Isabella, the regents in the southern Netherlands and travelled in Holland with friends Peter Paul Rubens (1577-1640), Heindrick van Balen (1575-1632) and visited Hendrick Goltzius (1558-1617) in Haarlem. Among his pupils were his son, Jan Bruegel the Younger (1601-1678) who imitated his father's work and Daniel Seghers (1590-1661).

This painting is a good example of the small size landscape painting tradition developed in the Netherlands by Jan Brueghel the Elder and that has remained fashionable for over a century. These paintings typically represented scenes of everyday life such as this one where villagers move around on small river boats. In the distance one can distinguish people crossing the river on a bridge or a woman feeding her chickens on the threshold. Images of this kind offered a peaceful and idyllic idea of the country life and were therefore greatly sought after by contemporary collectors.

A river landscape with boats and small figures, trees and houses on each riverbank and a village in the distance.

Historical significance: Originally acquired as by Jan Brueghel himself, this painting on copper was most likely executed by a close follower. Small decorative landscapes inherited from Jan Brueghel's tradition were long fashionable in the Netherlands up to the end of the 17th century. In this respect, Jan Brueghel the Elder had many followers such as Theobald Michau (1676-1767), Mathieu Schoevaertdts (ca. 1665-after1702) or Pierre Bouts (1658-1719). These painters took over the traditional subject matters developed by Jan Brueghel I such as kermes, market and harbours scenes but gradually renounced to depict mythological or allegorical pictures. Compare to the present painting, Jan Brueghel's landscapes are usually structured upon a more open horizon line that provide the view with a deeper sense of perspective. On the other hand, the narrow river scene draw the beholder's eye through the houses situated on each side towards a distant village, a characteristics that may derives from Gillis van Coninxloo III (1544-1607), see Landscape, Royal Museums of Fine Arts of Belgium (Inv. No. 10829).

Landscape paintings, i.e. the artistic representation of nature in terms of physical "view", were extremely popular during the 17th century and increasingly encompassed a variety of forms and genres. Flemish landscape tradition was already well developed in the mid 16th century with such artists as Pieter Bruegel the Elder (ca. 1525-1569) and Gillis van Coninxloo (1544-1607) who used to place small figures from mythological, biblical and historical subjects in the foreground. Based on a close observation of nature, most of these landscapes are paradoxically imaginary as they were conceived as resulting from an intellectual construction, a concept explained in the Flemish 'Vasari' Karel van Mander's Grondt der Edel vry Schilder-const (Principles of the noble art of painting) in 1604. This does not exclude a second tradition of landscape founded on a more direct approach to nature which great innovator was Hieronymus Cock (ca. 1510-1570) and that would particularly spread in the northern Netherlands, that is Holland, after the Eighty Years' War (1568-1648). By the later 16th century indeed, traditional artistic ties between northern and southern Netherlands, i.e. Holland and Flanders, changed radically as many Flemish artists such as for instance Gillis van Coninxloo and Jacob de Gheyn II (1565-1629) both from Antwerp, Roelandt Savery (1576-1639) and his brother Jacob the Elder (ca.1545-1602), natives of Coudrai, emigrated to Holland. 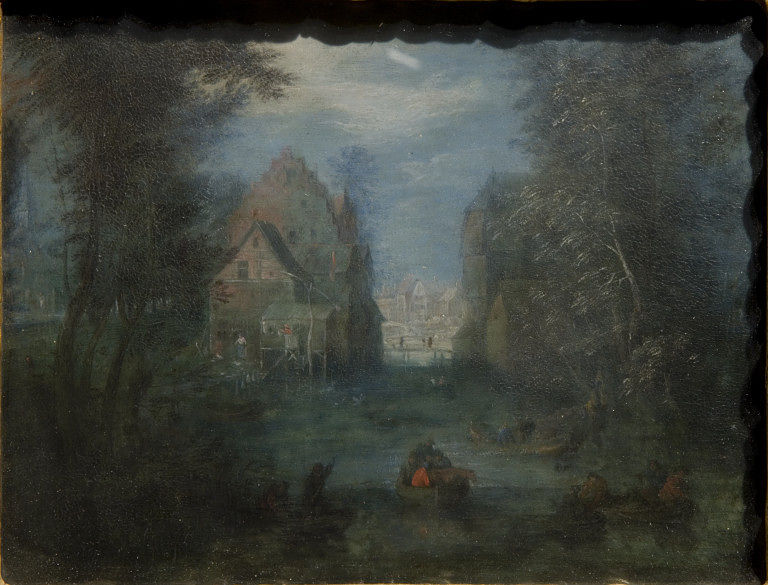