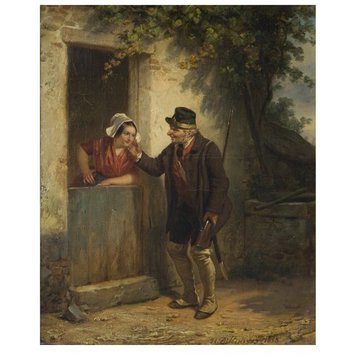 Hendrick Joseph Dillens (1812-1872) was probably born in Ghent and studied at the Academy there. Little is known about his life but, like his brother, Adolphe-Alexandre Dillens (1821-1877), he was active as a painter and etcher. He had two sons, the painter Albert (b 1844), who produced fishing scenes, portraits and a few religious works, and the sculptor Julien Dillens (1849-1904).

This painting is a good example of Dillens' large production of genre painting, a category in which he specialised like many other artists of his generation. The genre imagery, epitomised during the 17th century in the Netherlands, was still much appreciated in the 19th century and Belgian artists, as well as their Dutch fellows, perpetuated this trend. They favoured humble anecdotic subjects such as the present one, with which they often had a direct contact.

An old soldier woos a young girl leaning against a cottage door; she is wearing a white headdress and a pink garment that echoes the soldier's red undervest; some foliage are running along the house's façade.

Historical significance: This painting is a good example of Hendrick Joseph Dillens' genre paintings, a category in which he specialised producing many scenes in open air as well as domestic interiors. The present painting showing an old soldier flattering a young girl bears all the essential characteristics of the painter's style such as a golden palette enlivened by touches of pinkish red and bright yellow, a relatively loose brushwork and wooden figures clumsily executed. Comparable paintings can be found in the Museum voor Oudheikunde en Sierkunst en Schone Kunsten, Kortrijk, especially The Sleeper dated 1847, which displays the same palette tonality and follows the same compositional scheme with a figure leaning against a cottage door and other characters standing before it.
With these genre scenes, Dillens, like many artists of his generation, went back to the Dutch traditional genre painting of the 17th century, excluding though the hidden meaning or symbolical message these pictures usually bore. There was in the first half of the 19th century a common fascination for Golden Age's imagery and artists tends to imitate their predecessors without adding any innovative pictorial effects. This Belgian genre school would however evolve and announce the new realism of The Hague school at the end of the century. 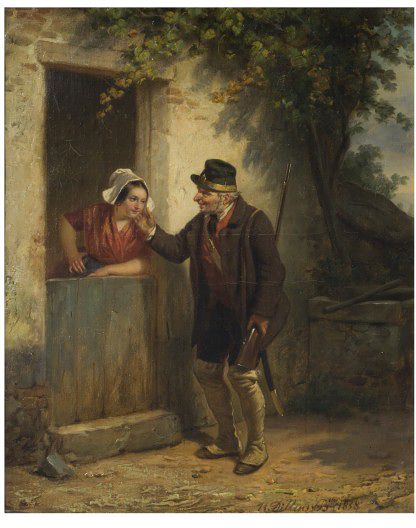