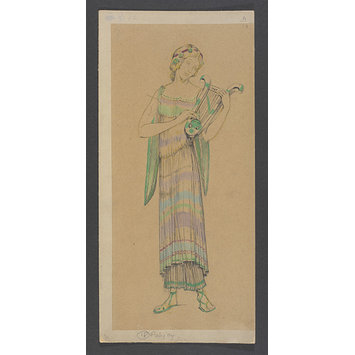 Patience, or, Bunthorne’s Bride by W.S. Gilbert and Arthur Sullivan was produced at the Opera Comique Theatre under the management of Richard D’Oyly Carte on Saturday 23rd April 1881, and transferred to the Savoy Theatre on Monday 10th October 1881 until Thursday 23rd November 1882.

By 1880 Gilbert and Sullivan’s operas were a success on both sides of the Atlantic. Realising the limitations of the old-fashioned Opera Comique Theatre, and the public’s undiminished appetite for these profitable comic operas, Carte planned a new theatre for them in London’s Strand. Gilbert started a libretto based on The Rival Curates, his 1867 Bab Ballad concerning two clergymen of neighbouring parishes vying with each other for meekness. Concerned about church reaction however, he turned his satire on Oscar Wilde and Aestheticism, changing the Reverends Clayton Hooper and Hopley Porter into Reginald Bunthorne and Archibald Grosvenor, rival poets competing for the affections of the sensible milkmaid Patience, and the Aesthetic maidens who spurn the officers of the Thirty-Fifth Dragoon Guards. Patience opened at the Opera Comique and received even more critical acclaim in October on its transfer to Carte’s brilliant new theatre, complete with electric light. By sending Oscar Wilde on a North American lecture tour at the end of 1881, Carte helped assure its transatlantic success.

George Sheringham (1884-1937) was an eclectic and prolific artist, commercial designer and stage designer whose early childhood was spent in Tewksbury where his father was vicar of the Abbey. After school at the King’s School, Gloucester, and eighteen months at the Slade Art School from the age of fifteen, Sheringham studied with Harry Becker from 1901 to 1904, and lived and studied in Paris in 1905 and 1906, where he was influenced by oriental art in the Musée Guimet. After supporting himself with poster design and watercolour painting he specialised in decorative work painting fans and panels on Lyonnais silk from November 1910. In 1915 he did his first book illustration for Max Beerbohm’s The Happy Hypocrite, and in 1917 and 1918 his first theatre designs for The Sneezing Charm produced by the private theatre club The Plough Club.

Sheringham’s work for productions by Nigel Playfair at the Lyric Theatre Hammersmith, starting with designs for The Duenna in 1924 led to commissions by Rupert D’Oyly Carte for redressing The Pirates of Penzance, H.M.S. Pinafore and Patience for the 1929 season, and for new dresses for Phyllis, Stephon and the Fairies in Iolanthe in1932. He was awarded a Grand Prix at the Paris Salon in 1925 for mural and theatrical design, and although an invalid from 1932, he continued flower painting until his death in 1937, shortly before his 53rd birthday.

Watercolour and pencil on card 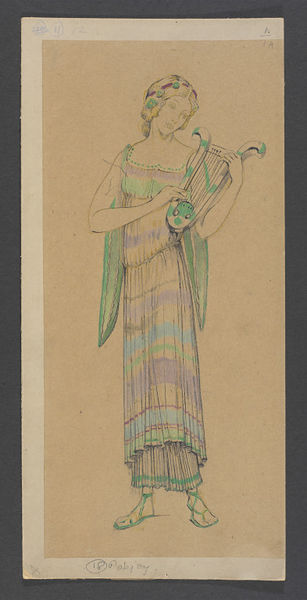