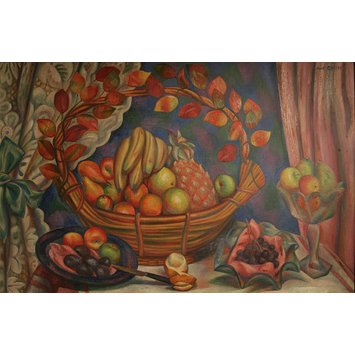 Still-life of a basket of fruit (including a pineapple, apples, bananas and pears) on a table that is covered with a pale cloth. An original design in oil on canvas.

This is an original design for a poster for the Empire Marketing Board.

Historical significance: The Empire Marketing Board was established in 1926 to promote trade with the Colonies and Dominions and to encourage British people to buy goods from the Empire. Communication with the public was at the heart of the project, and posters with slogans like 'Buy Empire Every Day' and 'Follow the Flag in all your Purchases' were a vitally important part of the Board's campaign. The Secretary of the Board formed a Poster Sub-Committee to which Frank Pick, Chief Executive of London Transport, was appointed. Pick believed passionately in the importance of design and was responsible for commissioning lettering, maps and posters for London Transport in the interwar period, including commissioning Edward McKnight Kauffer to design advertising posters, and Jacob Epstein to create the 'Night and Day' figures for St James's Park underground station.

The Publicity Committee of the Empire Marketing Board recommended that the Board restrict itself to posters of 'real artistic value. It is thought that such work makes a deeper and more arresting appeal to the public than ordinary commercial work while being more in consonance with the character of the Board's campaign.' (Quoted in Mark Haworth-Booth, E. McKnight Kauffer: a designer and his public, London: V&A, 2005, p. 50.) Consequently the Board employed some of the best known artists and graphic designers of the era; in addition to Mark Gertler (1891-1939), these included Paul and John Nash, William Nicholson, McKnight Kauffer and Stanley Spencer.

The posters were displayed on specially-designed hoardings, to be used only by the Empire Marketing Board. These hoardings were constructed from English oak and British Columbian pine, and by the end of 1928 they occupied nearly 1000 sites around the country. The hoardings had three large landscape-format panels, each measuring 40 by 60 inches, with two smaller portrait-format panels between them. The three large panels were designed for pictorial posters, and the two smaller, along with a space at the top of the hoarding, for lettering. (Haworth-Booth, p. 49.)

Pick commissioned Gertler to produce three posters, upon which the artist worked in early 1931 (Sarah MacDougall, Mark Gertler, London: John Murray, 2002, p. 269). Gertler used the three-poster format to illustrate three seasons: spring, summer and autumn. Each painting depicts a lavish display of the fruit available in Britain during each season. As this fruit was imported from the tropical countries of the Empire, the elements are the same in all three: bananas, a pineapple, grapes and so on. The message is that, thanks to Britain's trading links with the Empire, exotic and unseasonal fruit can be purchased all year round.

Gertler was essentially a fine artist and this was an unusual commission for him. However, the project fitted well with the brilliant colour, strong outlines and heavy, sculptural forms which characterise his work. In the event Gertler's designs were not used, as they proved too expensive to print; presumably the tertiary colours he used were not conducive to colour reproduction.

When the Empire Marketing Board was closed in 1933 as a result of government cuts, an exhibition of the original designs for the posters was held at the Imperial Institute in South Kensington, an organisation which had been established for the purpose of carrying out research into the resources and raw materials of the Empire. From there a selection, including these designs by Gertler, was presented to the Museum by the Board in 1934.

'Summer'. Still-life of a basket of fruit. Original poster design, in oil on canvas, for the Empire Marketing Board. By Mark Gertler. Great Britain. 1931. 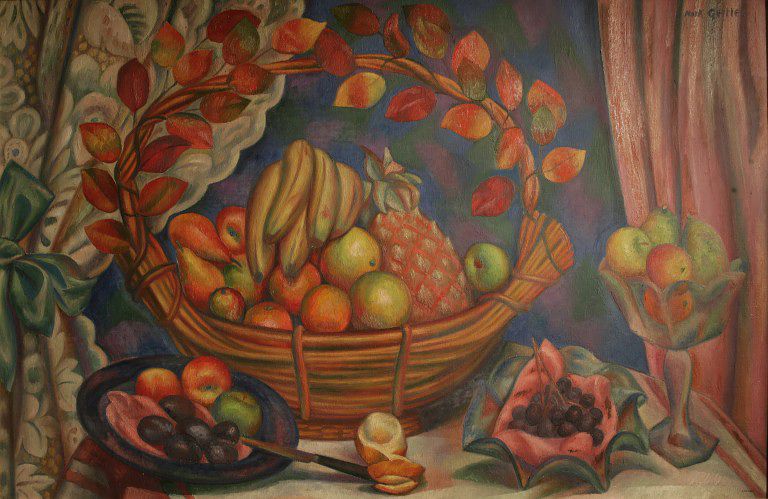