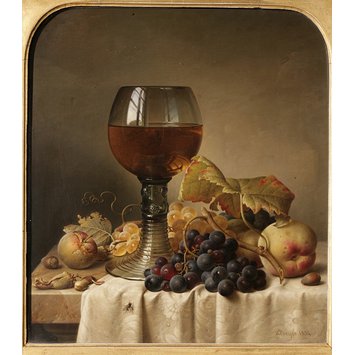 Johann Wilhelm Preyer (1803-1889) was born in Rheydt (Ruhr) and studied at the Düsseldorf Kunstakademie (1822-31) and later the Dutch masters at The Hague and Amsterdam. Preyer rapidly developed an exquisite draughtsmanship in still-life paintings, but he also occasionally painted small landscapes. His daughter Emilie Preyer (1849-1930) was also a still-life painter, and his son Gustav Preyer (1801-39) became a landscape painter.

Still-life on a table with a pleated table-cloth, a tall goblet filled with red wine, grapes and an apple on the right hand-side, chestnut, and another apple on the left, neutral greyish background.

'JW Preyer 1854'
Signed and dated by the artist, lower right; initials in monogram

Historical significance: This painting is a typical example of Preyer's mature period, when after the mid-1840s he settled on the formula from which he would not depart the rest of his life. In these compositions, the round goblet, seen here in a central position, is a recurrent feature. Preyer's art is particularly reminiscent of Willem Claesz. Heda's almost monochrome and highly detailed still-lifes. The revival of Dutch 17th-century imagery in general and still-life painting in particular resulted from a renewed interest in nature.

A few compositions on paper focusing on the same goblet and arrangement of grapes, executed between 1833 and 1857, can be found in the Museum Shloss Rheydt, Mönchengladbach whereas a similar painted composition is in the Nationalgalerie, Museum Preussischer Kulturbesitz, Berlin.

Still-life reached the height of its popularity in Western Europe, especially in the Netherlands during the 17th century even though still-life subjects already existed in pre-Classical, Classical and Renaissance art. The term conventionally refers to the type of work in which an arrangement of diverse inanimate objects including fruits and shellfishes, vessels and artefacts are depicted. Dutch painters played a major role in its development, inventing many distinctive variations on the theme over the course of the century. For instance Haarlem painters such as Pieter Claesz. (1597/98-1661) and Willem Claesz. Heda (1593/94-1680/82) specialized in depicting monochrome still-life with neutral tones whereas Willem Kalf concentrated his attention on the representation of luxury goods in a limited however contrasted palette. Scholarly opinions had long been divided over how all of these images should be understood. They manifestly witnessed the prosperous growth of wealthy cities such as Amsterdam and Haarlem but also may be envisaged asmemento mori, or vanitas, i.e. reminding pictures of the human mortality and invitation to a meditation upon the passage of time. By the late 17th century, artists were refining their technique to ever-greater virtuosity, finding markets for their skills throughout Europe. These pieces were still popular in the 18th century, especially the fruit and flowers ones. 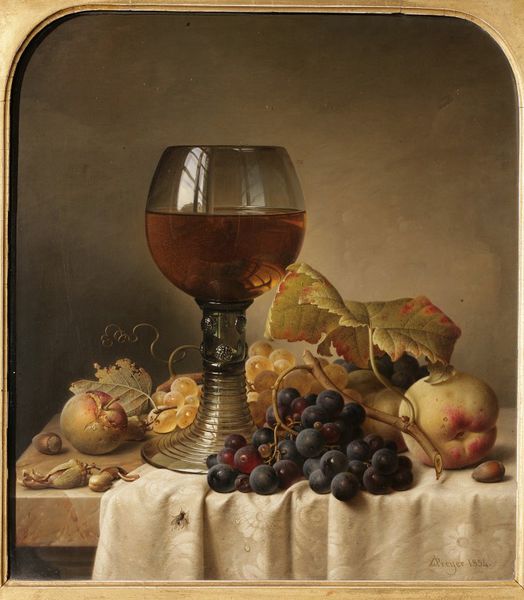